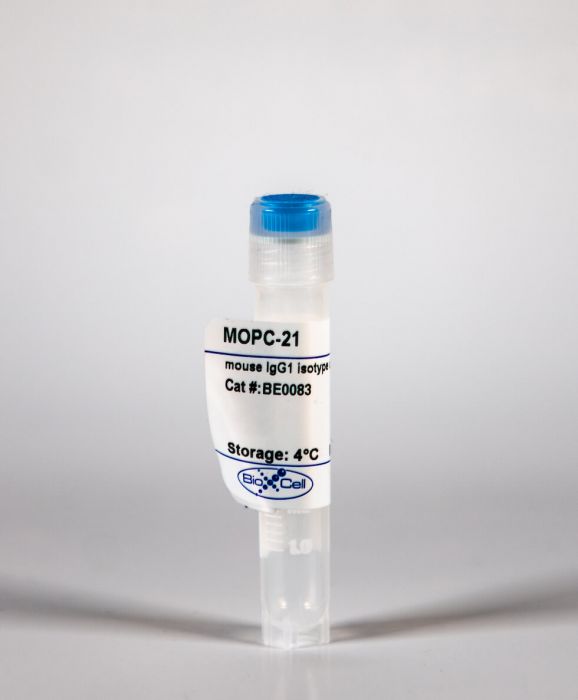 The MOPC-21 monoclonal antibody is ideal for use as a non-reactive isotype-matched control for mouse IgG1 antibodies in most in vivo and in vitro applications.

A diet rich in salt is linked to an increased risk of cerebrovascular diseases and dementia, but it remains unclear how dietary salt harms the brain. We report that, in mice, excess dietary salt suppresses resting cerebral blood flow and endothelial function, leading to cognitive impairment. The effect depends on expansion of TH17 cells in the small intestine, resulting in a marked increase in plasma interleukin-17 (IL-17). Circulating IL-17, in turn, promotes endothelial dysfunction and cognitive impairment by the Rho kinase-dependent inhibitory phosphorylation of endothelial nitric oxide synthase and reduced nitric oxide production in cerebral endothelial cells. The findings reveal a new gut-brain axis linking dietary habits to cognitive impairment through a gut-initiated adaptive immune response compromising brain function via circulating IL-17. Thus, the TH17 cell-IL-17 pathway is a putative target to counter the deleterious brain effects induced by dietary salt and other diseases associated with TH17 polarization.

Although characterization of T cell exhaustion has unlocked powerful immunotherapies, the mechanisms sustaining adaptations of short-lived innate cells to chronic inflammatory settings remain unknown. During murine chronic viral infection, we found that concerted events in bone marrow and spleen mediated by type I interferon (IFN-I) and Toll-like receptor 7 (TLR7) maintained a pool of functionally exhausted plasmacytoid dendritic cells (pDCs). In the bone marrow, IFN-I compromised the number and the developmental capacity of pDC progenitors, which generated dysfunctional pDCs. Concurrently, exhausted pDCs in the periphery were maintained by self-renewal via IFN-I- and TLR7-induced proliferation of CD4(-) subsets. On the other hand, pDC functional loss was mediated by TLR7, leading to compromised IFN-I production and resistance to secondary infection. These findings unveil the mechanisms sustaining a self-perpetuating pool of functionally exhausted pDCs and provide a framework for deciphering long-term exhaustion of other short-lived innate cells during chronic inflammation.

Infections with cytomegalovirus (CMV) can cause severe disease in immunosuppressed patients and infected newborns. Innate as well as cellular and humoral adaptive immune effector functions contribute to the control of CMV in immunocompetent individuals. None of the innate or adaptive immune functions are essential for virus control, however. Expansion of gammadelta T cells has been observed during human CMV (HCMV) infection in the fetus and in transplant patients with HCMV reactivation but the protective function of gammadelta T cells under these conditions remains unclear. Here we show for murine CMV (MCMV) infections that mice that lack CD8 and CD4 alphabeta-T cells as well as B lymphocytes can control a MCMV infection that is lethal in RAG-1(-/-) mice lacking any T- and B-cells. gammadelta T cells, isolated from infected mice can kill MCMV infected target cells in vitro and, importantly, provide long-term protection in infected RAG-1(-/-) mice after adoptive transfer. gammadelta T cells in MCMV infected hosts undergo a prominent and long-lasting phenotypic change most compatible with the view that the majority of the gammadelta T cell population persists in an effector/memory state even after resolution of the acute phase of the infection. A clonotypically focused Vgamma1 and Vgamma2 repertoire was observed at later stages of the infection in the organs where MCMV persists. These findings add gammadelta T cells as yet another protective component to the anti-CMV immune response. Our data provide clear evidence that gammadelta T cells can provide an effective control mechanism of acute CMV infections, particularly when conventional adaptive immune mechanisms are insufficient or absent, like in transplant patient or in the developing immune system in utero. The findings have implications in the stem cell transplant setting, as antigen recognition by gammadelta T cells is not MHC-restricted and dual reactivity against CMV and tumors has been described.

Here, we test the role of FoxP3(+) regulatory T cells (Tregs) in controlling T follicular helper (Tfh) and germinal centre (GC) B-cell responses to influenza. In contrast to the idea that Tregs suppress T-cell responses, we find that Treg depletion severely reduces the Tfh cell response to influenza virus. Furthermore, Treg depletion prevents the accumulation of influenza-specific GCs. These effects are not due to alterations in TGFbeta availability or a precursor-progeny relationship between Tregs and Tfh cells, but are instead mediated by increased availability of IL-2, which suppresses the differentiation of Tfh cells and as a consequence, compromises the GC B response. Thus, Tregs promote influenza-specific GC responses by preventing excessive IL-2 signalling, which suppresses Tfh cell differentiation.

Smac mimetic compounds (SMC), a class of drugs that sensitize cells to apoptosis by counteracting the activity of inhibitor of apoptosis (IAP) proteins, have proven safe in phase 1 clinical trials in cancer patients. However, because SMCs act by enabling transduction of pro-apoptotic signals, SMC monotherapy may be efficacious only in the subset of patients whose tumors produce large quantities of death-inducing proteins such as inflammatory cytokines. Therefore, we reasoned that SMCs would synergize with agents that stimulate a potent yet safe “cytokine storm.” Here we show that oncolytic viruses and adjuvants such as poly(I:C) and CpG induce bystander death of cancer cells treated with SMCs that is mediated by interferon beta (IFN-beta), tumor necrosis factor alpha (TNF-alpha) and/or TNF-related apoptosis-inducing ligand (TRAIL). This combinatorial treatment resulted in tumor regression and extended survival in two mouse models of cancer. As these and other adjuvants have been proven safe in clinical trials, it may be worthwhile to explore their clinical efficacy in combination with SMCs.

Although therapies targeting distinct cellular pathways (e.g., anticytokine versus anti-B cell therapy) have been found to be an effective strategy for at least some patients with inflammatory arthritis, the mechanisms that determine which pathways promote arthritis development are poorly understood. We have used a transgenic mouse model to examine how variations in the CD4(+) T cell response to a surrogate self-peptide can affect the cellular pathways that are required for arthritis development. CD4(+) T cells that are highly reactive with the self-peptide induce inflammatory arthritis that affects male and female mice equally. Arthritis develops by a B cell-independent mechanism, although it can be suppressed by an anti-TNF treatment, which prevented the accumulation of effector CD4(+) Th17 cells in the joints of treated mice. By contrast, arthritis develops with a significant female bias in the context of a more weakly autoreactive CD4(+) T cell response, and B cells play a prominent role in disease pathogenesis. In this setting of lower CD4(+) T cell autoreactivity, B cells promote the formation of autoreactive CD4(+) effector T cells (including Th17 cells), and IL-17 is required for arthritis development. These studies show that the degree of CD4(+) T cell reactivity for a self-peptide can play a prominent role in determining whether distinct cellular pathways can be targeted to prevent the development of inflammatory arthritis.

Several evidences suggest that regulatory T cells (Treg) promote Th17 differentiation. Based on this hypothesis, we tested the effect of IL-17A neutralization in a model of skin transplantation in which long-term graft survival depends on a strong in vivo Treg expansion induced by transient exogenous IL-2 administration. As expected, IL-2 supplementation prevented rejection of MHC class II disparate skin allografts but, surprisingly, not in IL-17A-deficient recipients. We attested that IL-17A was not required for IL-2-mediated Treg expansion, intragraft recruitment or suppressive capacities. Instead, IL-17A prevented allograft rejection by inhibiting Th1 alloreactivity independently of Tregs. Indeed, T-bet expression of naive alloreactive CD4+ T cells and the subsequent Th1 immune response was significantly enhanced in IL-17A deficient mice. Our results illustrate for the first time a protective role of IL-17A in CD4+-mediated allograft rejection process.

BACKGROUND: Asthma is defined as a chronic inflammatory disease of the airways; however, the underlying physiologic and immunologic processes are not fully understood. OBJECTIVE: The aim of this study was to determine whether TH9 cells develop in vivo in a model of chronic airway hyperreactivity (AHR) and what factors control this development. METHOD: We have developed a novel chronic allergen exposure model using the clinically relevant antigen Aspergillus fumigatus to determine the time kinetics of TH9 development in vivo. RESULTS: TH9 cells were detectable in the lungs after chronic allergen exposure. The number of TH9 cells directly correlated with the severity of AHR, and anti-IL-9 treatment decreased airway inflammation. Moreover, we have identified programmed cell death ligand (PD-L) 2 as a negative regulator of TH9 cell differentiation. Lack of PD-L2 was associated with significantly increased TGF-beta and IL-1alpha levels in the lungs, enhanced pulmonary TH9 differentiation, and higher morbidity in the sensitized mice. CONCLUSION: Our findings suggest that PD-L2 plays a pivotal role in the regulation of TH9 cell development in chronic AHR, providing novel strategies for modulating adaptive immunity during chronic allergic responses.

Staphylococcus aureus causes most infections of human skin and soft tissue and is a major infectious cause of mortality. Host defense mechanisms against S. aureus are incompletely understood. Interleukin 19 (IL-19), IL-20 and IL-24 signal through type I and type II IL-20 receptors and are associated with inflammatory skin diseases such as psoriasis and atopic dermatitis. We found here that those cytokines promoted cutaneous infection with S. aureus in mice by downregulating IL-1beta- and IL-17A-dependent pathways. We noted similar effects of those cytokines in human keratinocytes after exposure to S. aureus, and antibody blockade of the IL-20 receptor improved outcomes in infected mice. Our findings identify an immunosuppressive role for IL-19, IL-20 and IL-24 during infection that could be therapeutically targeted to alter susceptibility to infection.

Seasonal influenza epidemics recur due to antigenic drift of envelope glycoprotein antigens and immune evasion of circulating viruses. Additionally, antigenic shift can lead to influenza pandemics. Thus, a universal vaccine that protects against multiple influenza virus strains could alleviate the continuing impact of this virus on human health. In mice, accelerated clearance of a new viral strain (cross-protection) can be elicited by prior infection (heterosubtypic immunity) or by immunization with the highly conserved internal nucleoprotein (NP). Both heterosubtypic immunity and NP-immune protection require antibody production. Here, we show that systemic immunization with NP readily accelerated clearance of a 2009 pandemic H1N1 influenza virus isolate in an antibody-dependent manner. However, human immunization with trivalent inactivated influenza virus vaccine (TIV) only rarely and modestly boosted existing levels of anti-NP IgG. Similar results were observed in mice, although the reaction could be enhanced with adjuvants, by adjusting the stoichiometry among NP and other vaccine components, and by increasing the interval between TIV prime and boost. Importantly, mouse heterosubtypic immunity that had waned over several months could be enhanced by injecting purified anti-NP IgG or by boosting with NP protein, correlating with a long-lived increase in anti-NP antibody titers. Thus, current immunization strategies poorly induce NP-immune antibody that is nonetheless capable of contributing to long-lived cross-protection. The high conservation of NP antigen and the known longevity of antibody responses suggest that the antiviral activity of anti-NP IgG may provide a critically needed component of a universal influenza vaccine.