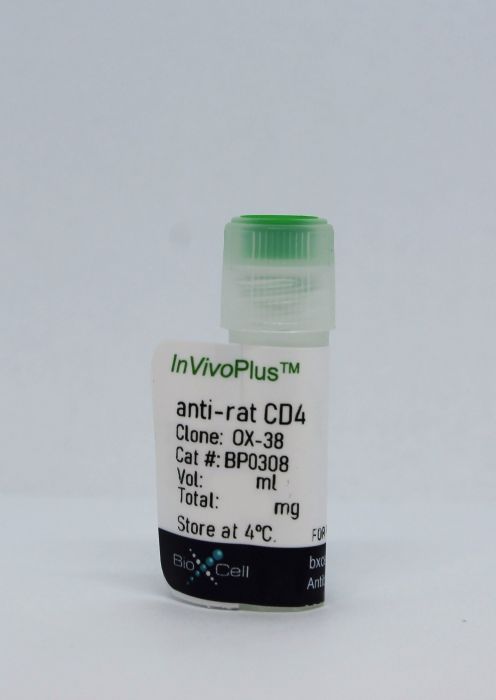 The OX-38 monoclonal antibody reacts with the rat CD4. The CD4 antigen is a 55 kDa cell surface type I membrane glycoprotein belonging to the immunoglobulin superfamily. CD4 acts as a co-receptor which in cooperation with the T cell receptor (TCR) interacts with class II MHC molecules displayed by antigen presenting cells (APC). CD4 is expressed by the majority of thymocytes, most helper T cells, a subset of NK-T cells and weakly by dendritic cells and macrophages. CD4 plays an important role in the development of T cells and is required for mature T cells to function optimally. The OX-38 antibody has been reported to deplete CD4+ T cells in vivo.

Efforts to develop an effective vaccine against the hepatitis C virus (HCV; human hepacivirus) have been stymied by a lack of small animal models. Here, we describe an experimental rat model of chronic HCV-related hepacivirus infection and its response to T cell immunization. Immune-competent rats challenged with a rodent hepacivirus (RHV) develop chronic viremia characterized by expansion of non-functional CD8(+) T cells. Single-dose vaccination with a recombinant adenovirus vector expressing hepacivirus non-structural proteins induces effective immunity in majority of rats. Resolution of infection coincides with a vigorous recall of intrahepatic cellular responses. Host selection of viral CD8 escape variants can subvert vaccine-conferred immunity. Transient depletion of CD8(+) cells from vaccinated rats prolongs infection, while CD4(+) cell depletion results in chronic viremia. These results provide direct evidence that co-operation between CD4(+) and CD8(+) T cells is important for hepacivirus immunity, and that subversion of responses can be prevented by prophylactic vaccination.

Inflammatory bowel disease (IBD) can lead to an increased risk of developing colorectal cancer (CRC). The aim of this study was to establish a model for combined bone marrow transplantation (BMT) and colitis-associated colorectal cancer (CAC) and to define the contribution of BM-derived cells during the inflammation associated with carcinogenesis. We established a model for BMT using green fluorescent protein (GFP) transgenic mice, followed by AOM/DSS-induced CAC, and performed confocal microscopy analysis on in vivo living tissue and frozen tumor sections. Our imaging analyses showed that GFP-positive cells extensively infiltrated the tumor stroma and that some WGA and GFP or CD31 and GFP double-positive cells were observed in the lining of tumor vessels. Flow cytometry analysis of the tumor-infiltrating cells showed that the GFP-positive CD11c+ DCs cells were one-third of the GFP+/CD11C- cells, and that half of these DCs (0.96% vs 1.02%) were GFP-positive BM-derived cells. The majority of CD4(+) T cells were GFP-negative (12.02% vs 1.9%), and we discovered a novel CD4(+) CD11c(+) DC subset (0.34% vs 1.64%). In conclusion, we defined the distribution of BM-derived endothelial cells, CD11c(+) DCs and CD4(+) T cells in tumors. This model might be useful for elucidating the diverse BM-derived cell types and functions during the progression of colitis-associated colorectal cancer.

Pneumonic tularemia is a life-threatening disease caused by inhalation of the highly infectious intracellular bacterium Francisella tularensis. The most serious form of the disease associated with the type A strains can be prevented in experimental animals through vaccination with the attenuated live vaccine strain (LVS). The protection is largely cell mediated, but the contribution of antibodies remains controversial. We addressed this issue in a series of passive immunization studies in Fischer 344 (F344) rats. Subcutaneous LVS vaccination induced a robust serum antibody response dominated by IgM, IgG2a, and IgG2b antibodies. Prophylactic administration of LVS immune serum or purified immune IgG reduced the severity and duration of disease in naive rats challenged intratracheally with a lethal dose of the virulent type A strain SCHU S4. The level of resistance increased with the volume of immune serum given, but the maximum survivable SCHU S4 challenge dose was at least 100-fold lower than that shown for LVS-vaccinated rats. Protection correlated with reduced systemic bacterial growth, less severe histopathology in the liver and spleen during the early phase of infection, and bacterial clearance by a T cell-dependent mechanism. Our results suggest that treatment with immune serum limited the sequelae associated with infection, thereby enabling a sterilizing T cell response to develop and resolve the infection. Thus, antibodies induced by LVS vaccination may contribute to the defense of F344 rats against respiratory infection by type A strains of F. tularensis.

PURPOSE: Radiation-induced pneumonitis and subsequent pulmonary fibrosis are important dose-limiting complications of radiotherapy. Their pathogenesis is known only in part. T-lymphocytes comprise a significant part of the infiltrating cells but little is known about their role. The aim of this study was to define the function of T-lymphocytes during development of postirradiation pneumonitis and pulmonary fibrosis. MATERIALS AND METHODS: Rats received a unilateral lung irradiation of 20 Gy. Kinetics of T-lymphocytes isolated from irradiated and non-irradiated lungs were analysed. Subsequent CD4 depletion experiments were performed to affirm the importance of CD4+ T-cells in the development of lung fibrosis. Finally, the T helper-cell subtype of the T-lymphocytes was analysed by determining the cytokine mRNA by RT-PCR. RESULTS: A selective increase of CD4+ T-cells was observed peaking 4 weeks after irradiation in the irradiated lungs. When rats were depleted of these cells, the postirradiation thickening of parenchyma was significantly reduced as determined by morphometric analysis of lung tissue sections. In addition, it was found that IL-4 mRNA was selectively increased in the CD4+ T-cells isolated from irradiated lungs, which indicates a lymphocyte reactivity dominated by Th2 cells. CONCLUSION: The results suggest a critical role for Th2 CD4+ T-lymphocytes in the pathogenesis of radiation-induced pneumonitis preceding lung fibrosis.