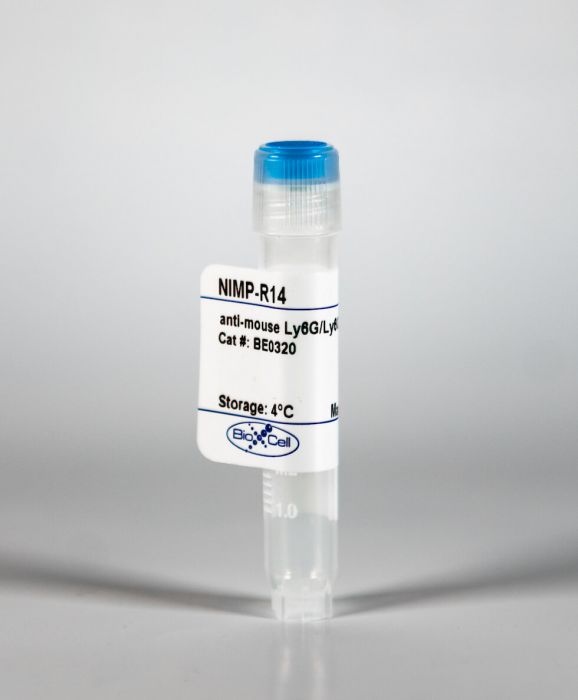 The NIMP-R14 monoclonal antibody is specific for murine neutrophils. The antibody is reported to react strongly with mouse Ly6G and Ly6C previously referred to as GR-1. Ly6G is a 21-25 kDa member of the Ly-6 superfamily of GPI-anchored cell surface proteins with roles in cell signaling and cell adhesion. Ly6G is expressed differentially during development by cells in the myeloid lineage including monocytes, macrophages, granulocytes, and neutrophils. Monocytes typically express Ly6G transiently during development while mature granulocytes and peripheral neutrophils retain expression making Ly6G a good cell surface marker for these populations. Ly6C is a monocyte/macrophage and endothelial cell differentiation antigen regulated by interferon gamma and is thought to play a role in the development and maturation of lymphocytes. The NIMP-R14 antibody has been shown to be useful for depletion of neutrophils in mice.

Although extracellular ATP is abundant at sites of inflammation, its role in activating inflammasome signalling in neutrophils is not well characterized. In the current study, we demonstrate that human and murine neutrophils express functional cell-surface P2X7R, which leads to ATP-induced loss of intracellular K(+), NLRP3 inflammasome activation and IL-1beta secretion. ATP-induced P2X7R activation caused a sustained increase in intracellular [Ca(2+)], which is indicative of P2X7R channel opening. Although there are multiple polymorphic variants of P2X7R, we found that neutrophils from multiple donors express P2X7R, but with differential efficacies in ATP-induced increase in cytosolic [Ca(2+)]. Neutrophils were also the predominant P2X7R-expressing cells during Streptococcus pneumoniae corneal infection, and P2X7R was required for bacterial clearance. Given the ubiquitous presence of neutrophils and extracellular ATP in multiple inflammatory conditions, ATP-induced P2X7R activation and IL-1beta secretion by neutrophils likely has a significant, wide ranging clinical impact.

To examine the role of caspase-1 and the NLRC4 inflammasome during bacterial infection, C57BL/6, IL-1beta(-/-), caspase-1(-/-), and NLRC4(-/-) mouse corneas were infected with ExoS/T- or ExoU-expressing Pseudomonas aeruginosa. We found that IL-1beta was essential for neutrophil recruitment and bacterial clearance and was produced by myeloid cells rather than resident cells. In addition, neutrophils were found to be the primary source of mature IL-1beta during infection, and there was no significant difference in IL-1beta processing between C57BL/6 and caspase-1(-/-) or NLRC4(-/-) infected corneas. IL-1beta cleavage by human and mouse neutrophils was blocked by serine protease inhibitors and was impaired in infected neutrophil elastase (NE)(-/-) corneas. NE(-/-) mice also had an impaired ability to clear the infection. Together, these results demonstrate that during P. aeruginosa infection, neutrophils are the primary source of mature IL-1beta and that IL-1beta processing is dependent on serine proteases and not NLRC4 or caspase-1.

Vascular endothelial growth factor receptor (VEGFR)-2 is a major stimulator of hemangiogenesis (HA), whereas VEGFR-3 stimulates lymphangiogenesis (LA). Contrary to this understanding, we demonstrate that implantation of pellets containing VEGFR-3-specific ligands (VEGF-C156S and recombinant murine VEGF-D) into the corneal stroma induce not only LA but also robust HA characterized by blood vessels that are positive for VEGFR-3 expression. The implantation of pellets containing VEGFR-3-specific ligands also leads to the recruitment of VEGF-A-secreting macrophages. Depletion of these infiltrating macrophages using clodronate-liposome administration shows a significant reduction in HA as well as LA. Blockade of either VEGFR-2 or VEGFR-3 signaling reduces both HA and LA; however, the percent reduction of HA is greater in the VEGFR-2 blockade group. In addition, in the VEGFR-3 blockade group, the percent reduction of HA is significantly greater with VEGFR-3-specific ligands than that by VEGF-A or VEGF-C. Collectively, our data suggest that VEGFR-3-specific signaling can induce new blood vessels, to which macrophages contribute a major role, and signify its potential as an additional therapeutic target to the existing VEGF-A/VEGFR-2 signaling-based antiangiogenesis strategies.

Toll-like receptors (TLRs) may contribute to the pathogenesis of chronic inflammatory destructive diseases through the recognition of endogenous ligands produced on either inflammation or degeneration of the extracellular matrix. The presence of endogenous TLR agonists has been reported in rheumatoid joints. In the present study, we investigated the significance of TLR2 and TLR4 activation by locally- produced endogenous ligands in the severity of joint inflammation and destruction. Local joint pathology independent of systemic immune activation was induced by overexpression of interleukin (IL)-1 and TNF in naive joints using adenoviral gene transfer. Here, we report that at certain doses, IL-1-induced local joint inflammation, cartilage proteoglycan depletion, and bone erosion are dependent on TLR4 activation, whereas TLR2 activation is not significantly involved. In comparison, tumor necrosis factor alpha-driven joint pathology seemed to be less dependent on TLR2 and TLR4. The severity of IL-1-induced bone erosion and irreversible cartilage destruction was markedly reduced in TLR4(-/-) mice, even though the degree of inflammation was similar, suggesting uncoupled processes. Furthermore, the expression of cathepsin K, a marker for osteoclast activity, induced by IL-1beta was dependent on TLR4. Overexpression of IL-1beta in the joint as well as ex vivo IL-1 stimulation of patellae provoked the release of endogenous TLR4 agonists capable of inducing TLR4-mediated cytokine production. These data emphasize the potential relevance of TLR4 activation in rheumatoid arthritis, particularly with respect to IL-1-mediated joint pathology.

Keratocan and lumican are keratan-sulfate proteoglycans (KSPG), which have a critical role in maintaining corneal clarity. To determine whether these KSPGs have a role in corneal inflammation, we examined Kera(-/-) and Lum(-/-) mice in a model of lipopolysaccharide (LPS)-induced keratitis in which wild-type mice develop increased corneal thickness and haze due to neutrophil infiltration to the corneal stroma. Corneal thickness increases caused by LPS mice were significantly lower in Kera(-/-) and Lum(-/-) than wild-type mice. Further, LPS-injected Lum(-/-) mice had elevated corneal haze levels compared with that of Kera(-/-) and wild-type. At 24 h post-injection, total enhanced green fluorescent protein-positive bone marrow-derived inflammatory cells in chimeric mice was significantly lower in Kera(-/-) mice and Lum(-/-) mice compared with wild-type mice. Neutrophil infiltration was inhibited in Kera(-/-) and Lum(-/-) mice at 6 and 24 h post-stimulation, with Lum(-/-) corneas having the most profound defect in neutrophil migration. Reconstitution of keratocan and lumican expression in corneas of Kera(-/-) and Lum(-/-) mice using adeno-keratocan and adeno-lumican viral vectors, respectively, resulted in normal neutrophil infiltration in response to LPS. Immunoprecipitation/Western blot analysis showed that lumican and keratocan core proteins bind the CXC chemokine KC during a corneal inflammatory response, indicating that corneal KSPGs mediate neutrophil recruitment to the cornea by regulating chemokine gradient formation. Together, these data support a significant role for lumican and keratocan in a corneal inflammatory response with respect to edema, corneal clarity, and cellular infiltration.