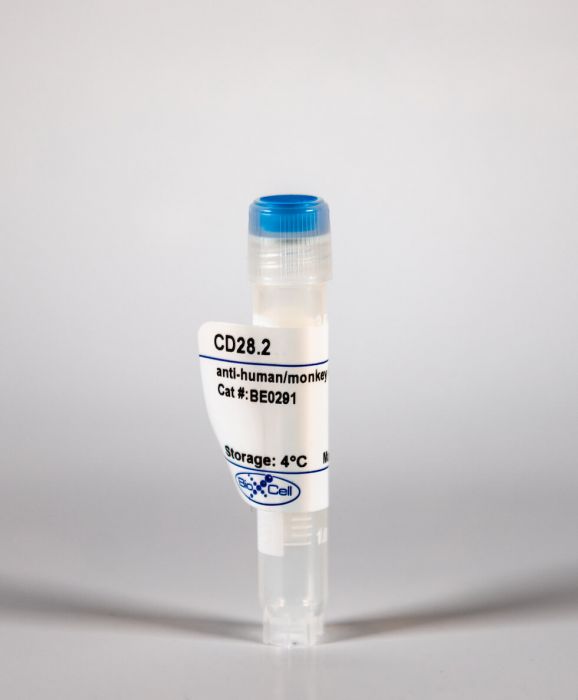 The CD28.2 monoclonal antibody reacts with human and monkey CD28, a 45 kDa costimulatory receptor and a member of the Ig superfamily. CD28 is expressed by thymocytes, most peripheral T cells, and NK cells. CD28 is a receptor for CD80 (B7-1) and CD86 (B7-2). Signaling through CD28 augments IL-2 and IL-2 receptor expression as well as cytotoxicity of CD3-activated T cells. The CD28.2 antibody has been shown to stimulate the proliferation of human T cells in vitro.

Combined immunotherapy targeting the immune checkpoint receptors cytotoxic T-lymphocyte-associated protein 4 (CTLA-4) and programmed cell death 1 (PD-1), or CTLA-4 and the PD-1 ligand (PD-L1) exhibits superior anti-tumor responses compared with single-agent therapy. Here, we examined the molecular basis for this synergy. Using reconstitution assays with fluorescence readouts, we found that PD-L1 and the CTLA-4 ligand CD80 heterodimerize in cis but not trans. Quantitative biochemistry and cell biology assays revealed that PD-L1:CD80 cis-heterodimerization inhibited both PD-L1:PD-1 and CD80:CTLA-4 interactions through distinct mechanisms but preserved the ability of CD80 to activate the T cell co-stimulatory receptor CD28. Furthermore, PD-L1 expression on antigen-presenting cells (APCs) prevented CTLA-4-mediated trans-endocytosis of CD80. Atezolizumab (anti-PD-L1), but not anti-PD-1, reduced cell surface expression of CD80 on APCs, and this effect was negated by co-blockade of CTLA-4 with ipilimumab (anti-CTLA-4). Thus, PD-L1 exerts an immunostimulatory effect by repressing the CTLA-4 axis; this has implications to the synergy of anti-PD-L1 and anti-CTLA-4 combination therapy.

Dimethyl fumarate (DMF) is an electrophilic drug that is used to treat autoimmune conditions, including multiple sclerosis and psoriasis. The mechanism of action of DMF is unclear but may involve the covalent modification of proteins or DMF serving as a prodrug that is converted to monomethyl fumarate (MMF). We found that DMF, but not MMF, blocked the activation of primary human and mouse T cells. Using a quantitative, site-specific chemical proteomic platform, we determined the DMF sensitivity of >2400 cysteine residues in human T cells. Cysteines sensitive to DMF, but not MMF, were identified in several proteins with established biochemical or genetic links to T cell function, including protein kinase Ctheta (PKCtheta). DMF blocked the association of PKCtheta with the costimulatory receptor CD28 by perturbing a CXXC motif in the C2 domain of this kinase. Mutation of these DMF-sensitive cysteines also impaired PKCtheta-CD28 interactions and T cell activation, designating the C2 domain of PKCtheta as a key functional, electrophile-sensing module important for T cell biology.

Induction of T-cell clonal anergy involves serial activation of transcription factors, including NFAT and Egr2/3. However, downstream effector mechanisms of these transcription factors are not fully understood yet. Here we identify Ndrg1 as an anergy factor induced by Egr2. Ndrg1 is upregulated by anergic signalling and maintained at high levels in resting anergic T cells. Overexpression of Ndrg1 mimics the anergic state and knockout of the gene prevents anergy induction. Interestingly, Ndrg1 is phosphorylated and degraded by CD28 signalling in a proteasome-dependent manner, explaining the costimulation dependence of anergy prevention. Similarly, IL-2 treatment of anergic T cells, under conditions that lead to the reversal of anergy, also induces Ndrg1 phosphorylation and degradation. Finally, older Ndrg1-deficient mice show T-cell hyperresponsiveness and Ndrg1-deficient T cells aggravate inducible autoimmune inflammation. Thus, Ndrg1 contributes to the maintenance of clonal anergy and inhibition of T-cell-mediated inflammation.

The transcription factor STAT3 is overexpressed and hyperactivated in T cells from SLE patients. STAT3 plays a central role in T cell differentiation into Th17 and T follicular helper cells, two subsets that orchestrate autoimmune responses in SLE. Moreover, STAT3 is important in chemokine-mediated T cell migration. To better understand its role in SLE, we inhibited STAT3 in lupus-prone mice using the small molecule Stattic. Stattic-treated mice exhibited delayed onset of proteinuria (3 weeks later than controls), and had lower levels of anti-dsDNA antibodies and inflammatory cytokines. Inhibitor treatment reduced lymphadenopathy, resulted in a 3-fold decrease in total T cell number, and a 4-fold decrease in the numbers of T follicular helper cells. In vitro experiments showed that Stattic-treated T cells exhibited decreased proliferation and a decrease in ability to migrate to CXCL12. We propose that STAT3 inhibition represents a therapeutic target in SLE, particularly lupus nephritis.

The Nef protein is an important HIV virulence factor that promotes the degradation of host proteins to augment virus production and facilitate immune evasion. The best-characterized targets of Nef are major histocompatibility complex class I (MHC-I) and CD4, but Nef also has been reported to target several other proteins, including CD8beta, CD28, CD80, CD86, and CD1d. To compare and contrast the effects of Nef on each protein, we constructed a panel of chimeric proteins in which the extracellular and transmembrane regions of the MHC-I allele HLA-A2 were fused to the cytoplasmic tails of CD4, CD28, CD8beta, CD80, CD86, and CD1d. We found that Nef coprecipitated with and disrupted the expression of molecules with cytoplasmic tails from MHC-I HLA-A2, CD4, CD8beta, and CD28, but Nef did not bind to or alter the expression of molecules with cytoplasmic tails from CD80, CD86, and CD1d. In addition, we used short interfering RNA (siRNA) knockdown and coprecipitation experiments to implicate AP-1 as a cellular cofactor for Nef in the downmodulation of both CD28 and CD8beta. The interaction with AP-1 required for CD28 and CD8beta differed from the AP-1 interaction required for MHC-I downmodulation in that it was mediated through the dileucine motif within Nef (LL(164,165)AA) and did not require the tyrosine binding pocket of the AP-1 mu subunit. In addition, we demonstrate a requirement for beta-COP as a cellular cofactor for Nef that was necessary for the degradation of targeted molecules HLA-A2, CD4, and CD8. These studies provide important new information on the similarities and differences with which Nef affects intracellular trafficking and help focus future research on the best potential pharmaceutical targets.

Because Langerhans cells (LC) in peripheral tissues are generally “immature” cells with poor lymphostimulatory activity, the contribution of immune responses initiated by LC to the pathogenesis of pulmonary LC histiocytosis (LCH) has been uncertain. In this study we demonstrate that LC accumulating in LCH granulomas are phenotypically similar to mature lymphostimulatory dendritic cells present in lymphoid organs. LC in LCH granulomas intensely expressed B7-1 and B7-2 molecules, whereas normal pulmonary LC and LC accumulating in other pathologic lung disorders did not express these costimulatory molecules. The presence of B7+ LC in LCH granulomas was associated with the expression in these lesions, but not at other sites in the lung, of a unique profile of cytokines (presence of GM-CSF, TNF-alpha, and IL-1beta and the absence of IL-10) that is known to promote the in vitro differentiation of LC into cells expressing a lymphostimulatory phenotype. Finally, LCH granulomas were the only site where CD154-positive T cells could be identified in close contact with LC intensely expressing CD40 Ags. Taken together, these results strongly support the idea that an abnormal immune response initiated by LC may participate in the pathogenesis of pulmonary LCH, and suggest that therapeutic strategies aimed at modifying the lymphostimulatory phenotype of LC may be useful in the treatment of this disorder.

The molecules of the B7 family play a major role in T-lymphocyte costimulation through interaction with their counterreceptors CD28 and CTLA4. In the present study, we analyzed the possible expression of B7 molecules on surgically removed thyroid tissue of patients with autoimmune [Hashimoto’s thyroiditis (HT) or Graves’ disease (GD)] or nonautoimmune [nontoxic goiter (NTG) or papillary cancer (PC)] thyroid diseases. We found clear positivity of thyroid follicular cells for B7.1 in HT but not in GD, nor in nonautoimmune specimens (NTG, PC) using in situ analysis by alkaline phosphatase anti-alkaline phosphatase (APAAP) technique. Double immunostaining experiments in combination with an anti-human thyroglobulin antibody confirmed follicular B7.1 localization. On the contrary, no follicular B7.2 expression was observed in any specimen analyzed. These findings were confirmed by immunofluorescence flow cytometry on isolated follicular cells. The cytokines IL1beta and LPS were able to induce de novo B7.1 expression on cultured thyroid follicular cells. Intrathyroid T cells proved responsive to stimulation via the B7 ligand CD28, even in the absence of IL2. Moreover preliminary evidence was obtained for an inhibitory effect of anti-B7.1 mAb on T-cell proliferation in coculture with isolated thyroid follicular cells. It is conceivable that in HT, expression of B7.1 on follicular cells, together with MHC class II antigens and ICAM1, could provide a local costimulatory signal for T-lymphocyte differentiation toward the type 1 cytokine secretion pattern and maintenance of the autoimmune process.