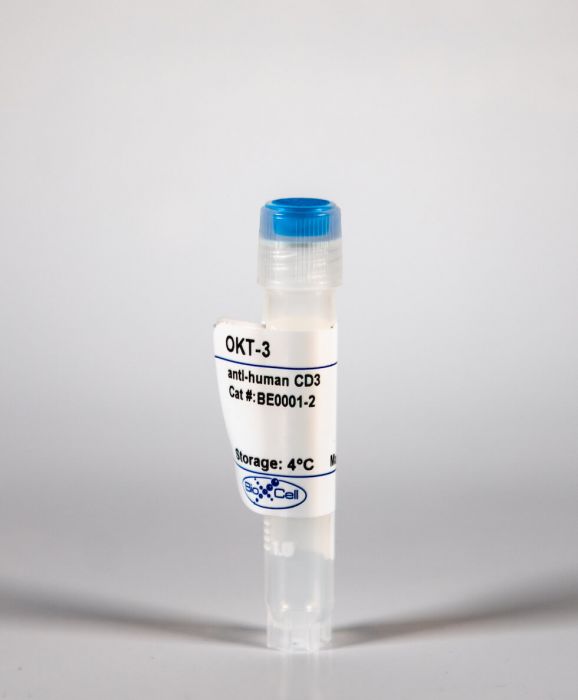 The OKT-3 monoclonal antibody reacts with human CD3ε, a 20 kDa transmembrane cell-surface protein that belongs to the immunoglobulin superfamily. CD3ε is one of five polypeptide chains that combine to form the TCR complex. CD3ε is expressed on T lymphocytes, NK-T cells, and to varying degrees on developing thymocytes. CD3 plays roles in TCR signaling, T lymphocyte activation, and antigen recognition. The OKT-3 antibody has immunosuppressive properties in vivo and has been shown to effectively treat renal, heart and liver allograft rejection.

The serine/threonine kinase glycogen synthase kinase-3 (GSK3) plays an important role in balancing pro- and anti-inflammatory cytokines. We have examined the role of GSK3 in production of IL-10 by subsets of CD4(+) T helper cells. Treatment of naive murine CD4(+) T cells with GSK3 inhibitors did not affect their production of IL-10. However, treatment of Th1 and Th2 cells with GSK3 inhibitors dramatically increased production of IL-10. GSK3 inhibition also led to upregulation of IL-10 among Th1, Th2, and Th17 subsets isolated from human blood. The encephalitogenic potential of GSK3 inhibitor treated murine Th1 cells was significantly reduced in adoptive transfer experiments by an IL-10-dependent mechanism. Analysis of the murine IL-10 promoter in response to inhibition of GSK3 in Th1 cells showed modification to a transcriptionally active state indicated by changes in histone H3 acetylation and methylation. Additionally, GSK3 inhibition increased expression of the transcription factors c-Maf, Nfil3, and GATA3, correlating with the increase in IL-10. These findings are important in the context of autoimmune disease since they show that it is possible to reprogram disease-causing cells through GSK3 inhibition.

While immune cell adaptors regulate proximal T cell signaling, direct regulation of the nuclear pore complex (NPC) has not been reported. NPC has cytoplasmic filaments composed of RanGAP1 and RanBP2 with the potential to interact with cytoplasmic mediators. Here, we show that the immune cell adaptor SLP-76 binds directly to SUMO-RanGAP1 of cytoplasmic fibrils of the NPC, and that this interaction is needed for optimal NFATc1 and NF-kappaB p65 nuclear entry in T cells. Transmission electron microscopy showed anti-SLP-76 cytoplasmic labeling of the majority of NPCs in anti-CD3 activated T cells. Further, SUMO-RanGAP1 bound to the N-terminal lysine 56 of SLP-76 where the interaction was needed for optimal RanGAP1-NPC localization and GAP exchange activity. While the SLP-76-RanGAP1 (K56E) mutant had no effect on proximal signaling, it impaired NF-ATc1 and p65/RelA nuclear entry and in vivo responses to OVA peptide. Overall, we have identified SLP-76 as a direct regulator of nuclear pore function in T cells.

Multiple sclerosis (MS) is an autoimmune disease of the CNS, and autoreactive CD4(+) T cells are considered important for its pathogenesis. The etiology of MS involves a complex genetic trait and environmental triggers that include viral infections, particularly the EBV. Among the risk alleles that have repeatedly been identified by genome-wide association studies, three are located near the Casitas B-lineage lymphoma proto-oncogene b gene (CBLB). The CBLB protein (CBL-B) is a key regulator of peripheral immune tolerance by limiting T cell activation and expansion and hence T cell-mediated autoimmunity through its ubiquitin E3-ligase activity. In this study, we show that CBL-B expression is reduced in CD4(+) T cells from relapsing-remitting MS (RR-MS) patients during relapse. The MS risk-related single nucleotide polymorphism of CBLB rs12487066 is associated with diminished CBL-B expression levels and alters the effects of type I IFNs on human CD4(+) T cell proliferation. Mechanistically, the CBLB rs12487066 risk allele mediates increased binding of the transcription factor C/EBPbeta and reduced CBL-B expression in human CD4(+) T cells. Our data suggest a role of the CBLB rs12487066 variant in the interactions of a genetic risk factor and IFN function during viral infections in MS.

Expression of the CTLA-4 gene is absolutely required for immune homeostasis, but aspects of its molecular nature remain undefined. In particular, the characterization of the soluble CTLA-4 (sCTLA-4) protein isoform generated by an alternatively spliced mRNA of CTLA4 lacking transmembrane-encoding exon 3 has been hindered by the difficulty in distinguishing it from the transmembrane isoform of CTLA-4, Tm-CTLA-4. In the current study, sCTLA-4 has been analyzed using novel mAbs and polyclonal Abs specific for its unique C-terminal amino acid sequence. We demonstrate that the sCTLA-4 protein is secreted at low levels following the activation of primary human CD4(+) T cells and is increased only rarely in the serum of autoimmune patients. Unexpectedly, during our studies aimed to define the kinetics of sCTLA-4 produced by activated human CD4(+) T cells, we discovered that Tm-CTLA-4 is associated with microvesicles produced by the activated cells. The functional roles of sCTLA-4 and microvesicle-associated Tm-CTLA-4 warrant further investigation, especially as they relate to the multiple mechanisms of action described for the more commonly studied cell-associated Tm-CTLA-4.

Immunodeficient mice are now readily engrafted with human hematopoietic cells. However, these mice are susceptible to graft-versus-host disease (GVHD) induced by the engraftment and rapid expansion of coinjected human T cells. Therefore, highly purified sample populations must be used, adding significant time, expense, and effort. Here, we have explored in vivo and in vitro methods utilizing anti-T-cell antibodies to circumvent this problem. Intraperitoneal injection of the antibody within 48 hours prevented GVHD. Alternatively, short-term in vitro incubation of cells with antibody immediately before transplant was equally effective. Although in vitro antithymocyte globulin treatment resulted in a dramatic loss of SCID-repopulating cells (SRCs), treatment with OKT3 or UCHT1 abrogated GVHD risk and preserved engraftment potential. Leukemia samples that presented with substantial human T-cell contamination were effectively rescued from GVHD. In addition, OKT3 treatment of unfractionated cord blood resulted in robust engraftment of primary and secondary mice that was indistinguishable from grafts obtained using purified CD34(+) cells. Limiting dilution analysis of unfractionated blood demonstrated a SRC frequency of 1 in 300 to 500 CD34(+) cells, similar to that of purified hematopoietic stem and progenitor cells. This protocol streamlines xenograft studies while significantly reducing the cost and time of the procedure.

V-domain Ig suppressor of T cell activation (VISTA) is a potent negative regulator of T-cell function that is expressed on hematopoietic cells. VISTA levels are heightened within the tumor microenvironment, in which its blockade can enhance antitumor immune responses in mice. In humans, blockade of the related programmed cell death 1 (PD-1) pathway has shown great potential in clinical immunotherapy trials. Here, we report the structure of human VISTA and examine its function in lymphocyte negative regulation in cancer. VISTA is expressed predominantly within the hematopoietic compartment with highest expression within the myeloid lineage. VISTA-Ig suppressed proliferation of T cells but not B cells and blunted the production of T-cell cytokines and activation markers. Our results establish VISTA as a negative checkpoint regulator that suppresses T-cell activation, induces Foxp3 expression, and is highly expressed within the tumor microenvironment. By analogy to PD-1 and PD-L1 blockade, VISTA blockade may offer an immunotherapeutic strategy for human cancer.