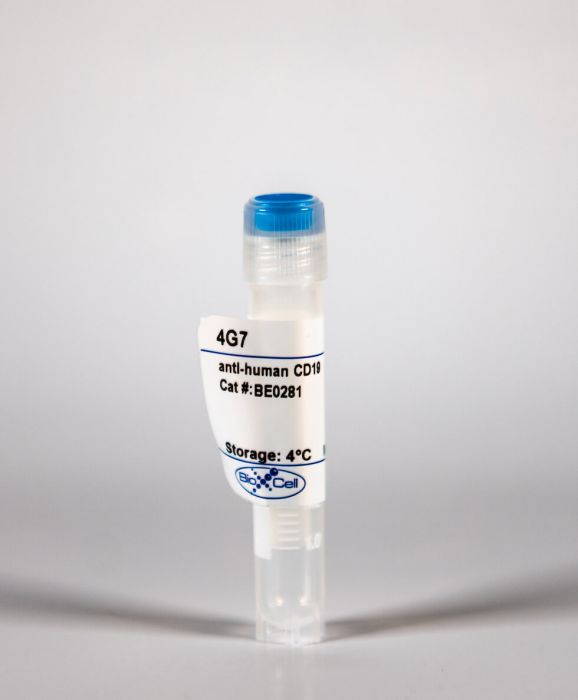 The 4G7 monoclonal antibody reacts with human CD19, a B cell-specific 95 kDa transmembrane glycoprotein of the immunoglobulin superfamily. CD19 contains two extracellular immunoglobulin-like domains and an extensive cytoplasmic tail. It functions as a positive regulator of B-cell receptor signaling in conjunction with CD21 and CD81. CD19 is highly expressed in most lymphomas and leukemias including some early B-cell malignancies that do not express CD20. For these reasons CD19 is quickly becoming an attractive alternative target for the immunotherapy of lymphoproliferative disorders.

Adoptive immunotherapy using autologous T cells endowed with chimeric antigen receptors (CAR) has emerged as a powerful means of treating cancer. However, a limitation of this approach is that autologous CAR T cells must be generated on a custom-made basis. Here we show that electroporation of transcription activator-like effector nuclease (TALEN) mRNA allows highly efficient multiplex gene editing in primary human T cells. We use this TALEN-mediated editing approach to develop a process for the large-scale manufacturing of T cells deficient in expression of both their alphabeta T-cell receptor (TCR) and CD52, a protein targeted by alemtuzumab, a chemotherapeutic agent. Functionally, T cells manufactured with this process do not mediate graft-versus-host reactions and are rendered resistant to destruction by alemtuzumab. These characteristics enable the administration of alemtuzumab concurrently or prior to engineered T cells, supporting their engraftment. Furthermore, endowing the TALEN-engineered cells with a CD19 CAR led to efficient destruction of CD19(+) tumor targets even in the presence of the chemotherapeutic agent. These results demonstrate the applicability of TALEN-mediated genome editing to a scalable process, which enables the manufacturing of third-party CAR T-cell immunotherapies against arbitrary targets. As such, CAR T-cell immunotherapies can therefore be used in an “off-the-shelf” manner akin to other biologic immunopharmaceuticals

Philadelphia chromosome-negative Myeloproliferative neoplasms (Ph-MPN) are accompanied by a markedly increased risk for development of chronic lymphocytic leukemia (CLL) compared to the general population. However, the pattern of onset and the biological characteristics of CLL in patients with coexistent Ph-MPN are highly heterogeneous rendering questionable if the above association reflects a causal relationship between the two disorders or merely represents a random event. By analyzing 82 patients with Ph-MPN and 100 age-matched healthy individuals we demonstrate that MPN patients have an almost threefold higher prevalence of, typically low-count, CLL-like monoclonal B lymphocytosis (MBL) compared to normal adults. The clone size remained unaltered during the disease course and unaffected by the administration of hydroxycarbamide, whereas no patient with Ph-MPN/MBL progressed to CLL during a median follow up of 4 years. Monoclonal B cells in Ph-MPN/MBL patients and normal individuals and in four more patients with coexistence of overt CLL and MPN displayed heterogeneous biological characteristics, while the JAK2V617F mutation was absent in isolated lymphocytes from Ph-MPN patients with coexistence of CLL. Despite its clinical and biological variability, the increased incidence of MBL in Ph-MPN patients along with the one reported for CLL further enforces the notion of a shared pathophysiology among the two malignancies via a common genetic link and/or microenviromental interactions.

PURPOSE: Transformation of follicular lymphoma is a critical event associated with a poor prognosis. The role of the tumor microenvironment in previous transformation studies has yielded conflicting results. EXPERIMENTAL DESIGN: To define cell subtypes associated with transformation, we examined tissue specimens at diagnosis from patients with follicular lymphoma that later transformed and, using immunohistochemistry (IHC), stained for CD68, CD11c, CD21, CXCL13, FOXP3, PD1, and CD14. Cell content and the pattern of expression were evaluated. Those identified as significantly associated with time to transformation (TTT) and overall survival (OS) were further characterized by flow cytometry and multicolor IHC. RESULTS: Of note, 58 patients were analyzed with median TTT of 4.7 years. The pattern of PD1(+) and CD14(+) cells rather than the quantity of cells was predictive of clinical outcomes. On multivariate analysis, including the follicular lymphoma international prognostic index score, CD14(+) cells localized in the follicle were associated with a shorter TTT (HR, 3.0; P = 0.004). PD1(+) cells with diffuse staining were associated with a shorter TTT (HR, 1.9; P = 0.045) and inferior OS (HR, 2.5; P = 0.012). Multicolor IHC and flow cytometry identified CD14(+) cells as follicular dendritic cells (FDC), whereas PD1(+) cells represented two separate populations, TFH and exhausted T cells. CONCLUSION: These results identify the presence of PD1(+) T cells and CD14(+) FDC as independent predictors of transformation in follicular lymphoma. Clin Cancer Res; 20(11); 2862-72. (c)2014 AACR.

Targeted T cells are emerging as effective non-toxic therapies for cancer. Multiple elements, however, contribute to the overall pathogenesis of cancer through both distinct and redundant mechanisms. Hence, targeting multiple cancer-specific markers simultaneously could result in better therapeutic efficacy. We created a functional chimeric antigen receptor-the TanCAR, a novel artificial molecule that mediates bispecific activation and targeting of T cells. We demonstrate the feasibility of cumulative integration of structure and docking simulation data using computational tools to interrogate the design and predict the functionality of such a complex bispecific molecule. Our prototype TanCAR induced distinct T cell reactivity against each of two tumor restricted antigens, and produced synergistic enhancement of effector functions when both antigens were simultaneously encountered. Furthermore, the TanCAR preserved the cytolytic ability of T cells upon loss of one of the target molecules and better controlled established experimental tumors by recognition of both targets in an animal disease model. This proof-of-concept approach can be used to increase the specificity of effector cells for malignant versus normal target cells, to offset antigen escape or to allow for targeting the tumor and its microenvironment.Molecular Therapy-Nucleic Acids (2013) 2, e105; doi:10.1038/mtna.2013.32; published online 9 July 2013.

CD19 is a pan B-cell surface receptor expressed from pro-B-cell development until its down-regulation during terminal differentiation into plasma cells. CD19 represents an attractive immunotherapy target for cancers of lymphoid origin due to its high expression levels on the vast majority of non-Hodgkin’s lymphomas and some leukemias. A humanized anti-CD19 antibody with an engineered Fc domain (XmAb5574) was generated to increase binding to Fcgamma receptors on immune cells and thus increase Fc-mediated effector functions. In vitro, XmAb5574 enhanced antibody-dependent cell-mediated cytotoxicity 100-fold to 1,000-fold relative to an anti-CD19 IgG1 analogue against a broad range of B-lymphoma and leukemia cell lines. Furthermore, XmAb5574 conferred antibody-dependent cell-mediated cytotoxicity against patient-derived acute lymphoblastic leukemia and mantle cell lymphoma cells, whereas the IgG1 analogue was inactive. XmAb5574 also increased antibody-dependent cellular phagocytosis and apoptosis. In vivo, XmAb5574 significantly inhibited lymphoma growth in prophylactic and established mouse xenograft models, and showed more potent antitumor activity than its IgG1 analogue. Comparisons with a variant incapable of Fcgamma receptor binding showed that engagement of these receptors is critical for optimal antitumor efficacy. These results suggest that XmAb5574 exhibits potent tumor cytotoxicity via direct and indirect effector functions and thus warrants clinical evaluation as an immunotherapeutic for CD19(+) hematologic malignancies.

Infection with hepatitis C virus (HCV), a leading cause of chronic liver diseases, can associate with B lymphocyte proliferative disorders, such as mixed cryoglobulinemia and non-Hodgkin lymphoma. The major envelope protein of HCV (HCV-E2) binds, with high affinity CD81, a tetraspanin expressed on several cell types. Here, we show that engagement of CD81 on human B cells by a combination of HCV-E2 and an anti-CD81 mAb triggers the JNK pathway and leads to the preferential proliferation of the naive (CD27-) B cell subset. In parallel, we have found that B lymphocytes from the great majority of chronic hepatitis C patients are activated and that naive cells display a higher level of activation markers than memory (CD27+) B lymphocytes. Moreover, eradication of HCV infection by IFN therapy is associated with normalization of the activation-markers expression. We propose that CD81-mediated activation of B cells in vitro recapitulates the effects of HCV binding to B cell CD81 in vivo and that polyclonal proliferation of naive B lymphocytes is a key initiating factor for the development of the HCV-associated B lymphocyte disorders.

We produced a hybridoma designated 4G7 from a mouse immunized with chronic lymphocytic leukemia cells. The 4G7 hybridoma secretes an IgG1 antibody that is specific for normal and malignant B lymphocytes. Using dual color immunofluorescence staining, this antibody reacted with all immunoglobulin-positive cells but no T cells in normal peripheral blood. There was no detectable 4G7 antigen on monocytes, platelets, red cells, granulocytes, or phytohemagglutinin-activated T cells. When PBL were depleted of 4G7 positive cells and stimulated with pokeweed mitogen, secreted immunoglobulin levels fell to less than 10% of control values on Day 5 and less than 1% of control on Day 7. This antibody was reactive with 155 of 176 B lineage neoplasms on which it was screened. Thirty-five cases of myeloid or T-lymphoid malignancy were negative. Our studies show that the 4G7 antigen modulates in the presence of excess antibody. Free 4G7 antigen was not found circulating in human serum. The cell surface antigen identified by 4G7 was sensitive to pronase proteolysis but resistant to trypsin and chymotrypsin digestion. A comparison of 4G7 with other known B-cell antibodies indicates that the 4G7 antigen has not been previously identified. This antibody is of use for the identification of normal B lymphocytes, the study of B-cell differentiation, and the characterization of lymphoid malignancies.