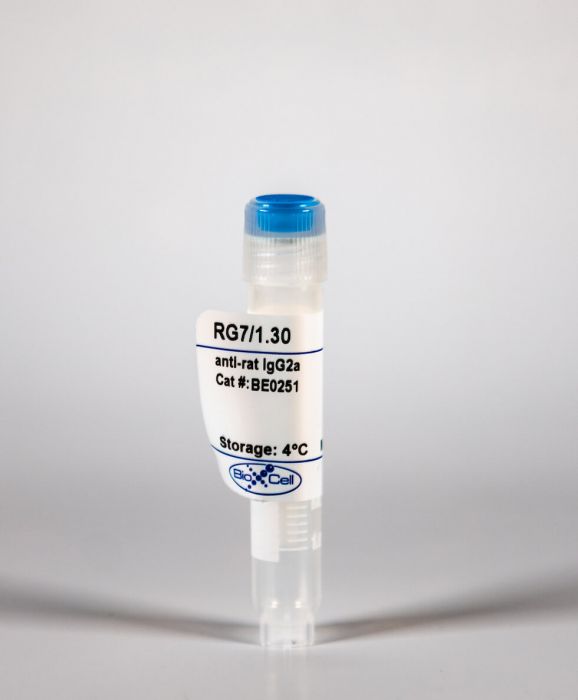 The RG7/1.30 monoclonal antibody reacts with the Fc region of rat IgG2a. It is commonly used as a secondary antibody to detect rat IgG2a antibodies in various diagnostic applications.

Hematopoietic stem cells (HSCs) first emerge during embryonic development within vessels such as the dorsal aorta of the aorta-gonad-mesonephros (AGM) region, suggesting that signals from the vascular microenvironment are critical for HSC development. Here, we demonstrated that AGM-derived endothelial cells (ECs) engineered to constitutively express AKT (AGM AKT-ECs) can provide an in vitro niche that recapitulates embryonic HSC specification and amplification. Specifically, nonengrafting embryonic precursors, including the VE-cadherin-expressing population that lacks hematopoietic surface markers, cocultured with AGM AKT-ECs specified into long-term, adult-engrafting HSCs, establishing that a vascular niche is sufficient to induce the endothelial-to-HSC transition in vitro. Subsequent to hematopoietic induction, coculture with AGM AKT-ECs also substantially increased the numbers of HSCs derived from VE-cadherin(+)CD45(+) AGM hematopoietic cells, consistent with a role in supporting further HSC maturation and self-renewal. We also identified conditions that included NOTCH activation with an immobilized NOTCH ligand that were sufficient to amplify AGM-derived HSCs following their specification in the absence of AGM AKT-ECs. Together, these studies begin to define the critical niche components and resident signals required for HSC induction and self-renewal ex vivo, and thus provide insight for development of defined in vitro systems targeted toward HSC generation for therapeutic applications.

Fluid shear stress promotes the emergence of hematopoietic stem cells (HSCs) in the aorta-gonad-mesonephros (AGM) of the developing mouse embryo. We determined that the AGM is enriched for expression of targets of protein kinase A (PKA)-cAMP response element-binding protein (CREB), a pathway activated by fluid shear stress. By analyzing CREB genomic occupancy from chromatin-immunoprecipitation sequencing (ChIP-seq) data, we identified the bone morphogenetic protein (BMP) pathway as a potential regulator of CREB. By chemical modulation of the PKA-CREB and BMP pathways in isolated AGM VE-cadherin(+) cells from mid-gestation embryos, we demonstrate that PKA-CREB regulates hematopoietic engraftment and clonogenicity of hematopoietic progenitors, and is dependent on secreted BMP ligands through the type I BMP receptor. Finally, we observed blunting of this signaling axis using Ncx1-null embryos, which lack a heartbeat and intravascular flow. Collectively, we have identified a novel PKA-CREB-BMP signaling pathway downstream of shear stress that regulates HSC emergence in the AGM via the endothelial-to-hematopoietic transition.

IgM antibodies specific for a certain antigen can enhance antibody responses when administered together with this antigen, a process believed to require complement activation by IgM. However, recent data show that a knock-in mouse strain, Cmu13, which only produces IgM unable to activate complement, has normal antibody responses. Moreover, the recently discovered murine IgM Fc receptor (FcmicroR or TOSO/FAIM3) was shown to affect antibody responses. This prompted the re-investigation of whether complement activation by specific IgM is indeed required for enhancement of antibody responses and whether the mutation in Cmicro13 IgM also caused impaired binding to FcmicroR. The results show that IgM from Cmicro13 and wildtype mice bound equally well to the murine FcmicroR. In spite of this, specific Cmu13 IgM administered together with sheep red blood cells or keyhole limpet hemocyanine was a very poor enhancer of the antibody and germinal center responses as compared with wildtype IgM. Within seconds after immunization, wildtype IgM induced deposition of C3 on sheep red blood cells in the blood. IgM which efficiently enhanced the T-dependent humoral immune response had no effect on activation of specific CD4(+) T cells as measured by cell numbers, cell division, blast transformation, or expression of the activation markers LFA-1 and CD44 in vivo. These observations confirm the importance of complement for the ability of specific IgM to enhance antibody responses and suggest that there is a divergence between the regulation of T- and B-cell responses by IgM.

The contributions of IFN regulatory factor (IRF) 3/7 and the type I IFNs IFN-alpha/beta to the innate host defense have been extensively investigated; however, their role in thymic development is less clear. In this study, we show that mice lacking the type I IFN receptor IFN-alpha/beta receptor (IFNAR) or the downstream transcription factor STAT1 harbor a significant reduction in self-Ag-presenting, autoimmune regulator (AIRE)(+) medullary thymic epithelial cells (mTECs). Constitutive IFNAR signaling occurs in the thymic medulla in the absence of infection or inflammation. Receptor activator for NF-kappaB (RANK) ligand stimulation results in IFN-beta upregulation, which in turn inhibits RANK signaling and facilitates AIRE expression in mTECs. Finally, we find that IRF7 is required for thymic IFN-beta induction, maintenance of thymic architecture, and mTEC differentiation. We conclude that spatially and temporally coordinated cross talks between the RANK ligand/RANK and IRF7/IFN-beta/IFNAR/STAT1 pathways are essential for differentiation of AIRE(+) mTECs.

IgM antibodies have been known for decades to enhance humoral immune responses in an antigen-specific fashion. This enhancement has been thought to be dependent on complement activation by IgM-antigen complexes; however, recent genetic studies render this mechanism unlikely. Here, we describe a likely alternative explanation; mice lacking the recently identified Fc receptor for IgM (FcmuR) on B cells produced significantly less antibody to protein antigen during both primary and memory responses. This immune deficiency was accompanied by impaired germinal center formation and decreased plasma and memory B-cell generation. FcmuR did not affect steady-state B-cell survival but specifically enhanced the survival and proliferation induced by B-cell receptor cross-linking. Moreover, FcmuR-deficient mice produced far more autoantibodies than control mice as they aged, suggesting that FcmuR is also required for maintaining tolerance to self-antigens. Our results thus define a unique pathway mediated by the FcmuR for regulating immunity and tolerance and suggest that IgM antibodies promote humoral immune responses to foreign antigen yet suppress autoantibody production through at least two pathways: complement activation and FcmuR.

The mammalian host has developed a long-standing symbiotic relationship with a considerable number of microbial species. These include the microbiota on environmental surfaces, such as the respiratory and gastrointestinal tracts, and also endogenous retroviruses (ERVs), comprising a substantial fraction of the mammalian genome. The long-term consequences for the host of interactions with these microbial species can range from mutualism to parasitism and are not always completely understood. The potential effect of one microbial symbiont on another is even less clear. Here we study the control of ERVs in the commonly used C57BL/6 (B6) mouse strain, which lacks endogenous murine leukaemia viruses (MLVs) able to replicate in murine cells. We demonstrate the spontaneous emergence of fully infectious ecotropic MLV in B6 mice with a range of distinct immune deficiencies affecting antibody production. These recombinant retroviruses establish infection of immunodeficient mouse colonies, and ultimately result in retrovirus-induced lymphomas. Notably, ERV activation in immunodeficient mice is prevented in husbandry conditions associated with reduced or absent intestinal microbiota. Our results shed light onto a previously unappreciated role for immunity in the control of ERVs and provide a potential mechanistic link between immune activation by microbial triggers and a range of pathologies associated with ERVs, including cancer.

To study the effect of enhanced glucocorticoid signaling on T cells, we generated transgenic rats overexpressing a mutant glucocorticoid receptor with increased ligand affinity in the thymus. We found that this caused massive thymocyte apoptosis at physiological hormone levels, which could be reversed by adrenalectomy. Due to homeostatic proliferation, a considerable number of mature T lymphocytes accumulated in the periphery, responding normally to costimulation but exhibiting a perturbed T-cell repertoire. Furthermore, the transgenic rats showed increased resistance to experimental autoimmune encephalomyelitis, which manifests in a delayed onset and milder disease course, impaired leukocyte infiltration into the central nervous system and a distinct cytokine profile. In contrast, the ability of the transgenic rats to mount an allergic airway response to ovalbumin was not compromised, although isotype switching of antigen-specific immunoglobulins was altered. Collectively, our findings suggest that endogenous glucocorticoids impact T-cell development and favor the selection of Th2- over Th1-dominated adaptive immune responses.