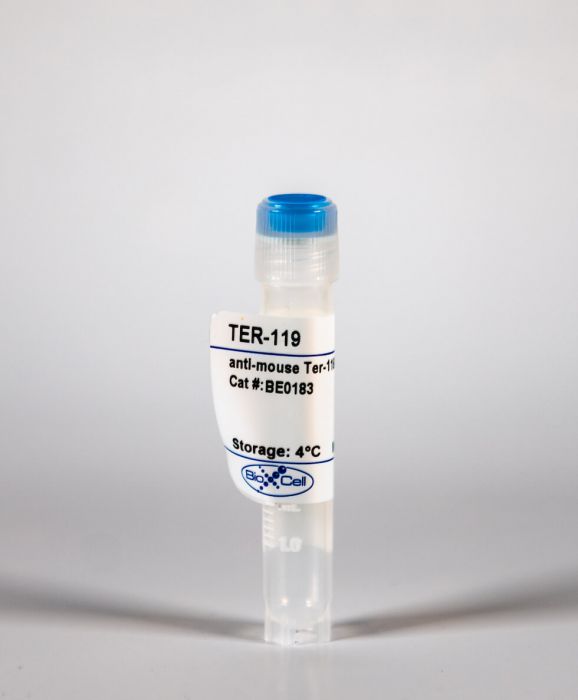 The TER-119 monoclonal antibody reacts with mouse Ter-119 a 52 kDa glycophorin A-associated protein that is expressed by erythroid cells from the early proerythroblast stage to mature erythrocytes. The TER-119 antibody is commonly used for identifying erythrocytes and cells in the erythroid lineage.

Natural killer (NK) cells play a critical role in controlling viral infections, coordinating the response of innate and adaptive immune systems. They also possess certain features of adaptive lymphocytes, such as undergoing clonal proliferation. However, it is not known whether this adaptive NK cell response can be modulated by other lymphocytes during viral exposure. Here, we show that the clonal expansion of NK cells during mouse cytomegalovirus infection is severely blunted in the absence of cytotoxic CD8(+) T cells. This correlates with higher viral burden and an increased pro-inflammatory milieu, which maintains NK cells in a hyper-activated state. Antiviral therapy rescues NK cell expansion in the absence of CD8(+) T cells, suggesting that high viral loads have detrimental effects on adaptive NK cell responses. Altogether, our data support a mechanism whereby cytotoxic innate and adaptive lymphocytes cooperate to ensure viral clearance and the establishment of robust clonal NK cell responses.

The process of affinity maturation, whereby T and B cells bearing antigen receptors with optimal affinity to the relevant antigen undergo preferential expansion, is a key feature of adaptive immunity. Natural killer (NK) cells are innate lymphocytes capable of “adaptive” responses after cytomegalovirus (CMV) infection. However, whether NK cells are similarly selected on the basis of their avidity for cognate ligand is unknown. Here, we showed that NK cells with the highest avidity for the mouse CMV glycoprotein m157 were preferentially selected to expand and comprise the memory NK cell pool, whereas low-avidity NK cells possessed greater capacity for interferon-γ (IFN-γ) production. Moreover, we provide evidence for avidity selection occurring in human NK cells during human CMV infection. These results delineate how heterogeneity in NK cell avidity diversifies NK cell effector function during antiviral immunity, and how avidity selection might serve to produce the most potent memory NK cells.

BACKGROUND: The mechanism of action of anti-D in ameliorating immune thrombocytopenia (ITP) remains unclear. The monoclonal antibody (MoAb) Ter119, which targets murine red blood cells (RBCs), has been shown to mimic the effect of anti-D in improving antibody-mediated murine ITP. The mechanism of Ter119-mediated ITP amelioration, especially the role of the antigen-binding and Fc domains, remains untested. A functional Fc domain is crucial for many therapeutic MoAb activity; therefore, the requirement of Ter119 Fc domain in ITP amelioration is investigated using outbred CD-1 mice. STUDY DESIGN AND METHODS: Ter119 variants, including Ter119 F(ab’)2 fragments, deglycosylated Ter119, and afucosylated Ter119, were generated to test their effect in ameliorating antibody-induced murine ITP. In vivo inhibition of FcgammaRIII and FcgammaRIIB was achieved using the Fab fragment of the FcgammaRIII/FcgammaRIIB-specific MoAb 2.4G2. RESULTS: Ter119 F(ab’)2 fragments and deglycosylated Ter119 were unable to ameliorate murine ITP or mediate phagocytosis of RBCs by RAW264.7 macrophages in vitro. Inhibition of FcgammaRIII and FcgammaRIIB, as well as Ter119 defucosylation, do not affect Ter119-mediated ITP amelioration. CONCLUSION: The Fc domain of Ter119, as well as its Fc glycosylation, is required for Ter119-mediated ITP amelioration. Moreover, both Fc and Fc glycosylation are required for Ter119-mediated phagocytosis in vitro. These findings demonstrate the importance of the Fc domain in a therapeutic MoAb with anti-D-like activity.

Primitive erythroblasts (EryPs) are the first hematopoietic cell type to form during mammalian embryogenesis and emerge within the blood islands of the yolk sac. Large, nucleated EryPs begin to circulate around midgestation, when connections between yolk sac and embryonic vasculature mature. Two to 3 days later, small cells of the definitive erythroid lineage (EryD) begin to differentiate within the fetal liver and rapidly outnumber EryPs in the circulation. The development and maturation of EryPs remain poorly defined. Our analysis of embryonic blood at different stages reveals a stepwise developmental progression within the EryP lineage from E9.5 to E12.5. Thereafter, EryDs are also present in the bloodstream, and the 2 lineages are not easily distinguished. We have generated a transgenic mouse line in which the human epsilon-globin gene promoter drives expression of green fluorescent protein exclusively within the EryP lineage. Here, we have used this line to characterize changes in cell morphology and surface-marker expression as EryPs mature and to track EryP numbers and enucleation throughout gestation. This study identifies previously unrecognized synchronous developmental stages leading to the maturation of EryPs in the mouse embryo. Unexpectedly, we find that EryPs are a stable cell population that persists through the end of gestation.

OBJECTIVE: In this study, we analyzed murine primitive erythropoiesis by coculturing Flk-1+ ES-derived cells with OP9 to find efficient culture conditions for erythroid cell induction. We utilized a nonserum culture system and EPO (erythropoietin) and found that this cytokine had unique properties. MATERIALS AND METHODS: ES cells (E14.1) were first differentiated to Flk-1+ cells and then cocultured with OP9 stromal cells. BIT9500 was used as a serum replacement. The erythroid morphology, hemoglobin types, and TER-119 expression levels were analyzed. RESULTS: Primitive erythroid cells with embryonic hemoglobin were generated very efficiently when the serum-containing culture was converted to the nonserum system. In this serum-free culture, TER-119+ erythroblasts appeared first on day 2 and maturation proceeded until day 7. When EPO was added to this coculture, the number of induced floating cells increased twofold to threefold. Unexpectedly, the erythroid-specific antigen TER-119 expression of these cells was drastically reduced. Since reduced TER-119 expression is usually interpreted as maturation arrest, we examined the phenotypic features of the EPO-treated cells. We found, however, no evidence of maturation arrest in the aspects of morphology and hemoglobin content. EPO did not suppress TER-119 expression of erythroblasts derived from fetal liver or adult bone marrow. CONCLUSIONS: Our results showed that EPO had the unusual property of inducing TER-119- erythroblasts in ES-derived primitive erythropoiesis. It is likely that this effect is unique to primitive erythropoiesis.