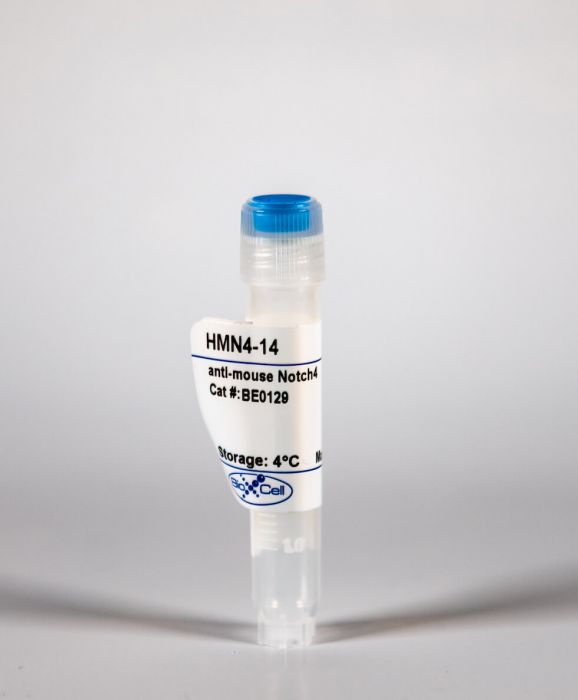 The HMN4-14 monoclonal antibody reacts with mouse neurogenic locus notch homolog 4 (Notch4) a member of the Notch family of type 1 transmembrane proteins. The Notch signaling pathway is a highly conserved intercellular signaling pathway. Five Notch ligands have been identified including DLL4 and Jagged2. Upon ligand binding the Notch receptor undergoes proteolysis and translocates to the nucleus ultimately activating transcription. The Notch pathway has been shown to play a role in myeloid cell proliferation, hematopoiesis, and embryonic endothelial development.

Notch family members were first identified as cell adhesion molecules by cell aggregation assays in Drosophila studies. However, they are generally recognized as signaling molecules, and it was unclear if their adhesion function was restricted to Drosophila. We previously demonstrated that a mouse Notch ligand, Delta-like 1 (Dll1) functioned as a cell adhesion molecule. We here investigated whether this adhesion function was conserved in the diversified mammalian Notch ligands consisted of two families, Delta-like (Dll1, Dll3 and Dll4) and Jagged (Jag1 and Jag2). The forced expression of mouse Dll1, Dll4, Jag1, and Jag2, but not Dll3, on stromal cells induced the rapid and enhanced adhesion of cultured mast cells (MCs). This was attributed to the binding of Notch1 and Notch2 on MCs to each Notch ligand on the stromal cells themselves, and not the activation of Notch signaling. Notch receptor-ligand binding strongly supported the tethering of MCs to stromal cells, the first step of cell adhesion. However, the Jag2-mediated adhesion of MCs was weaker and unlike other ligands appeared to require additional factor(s) in addition to the receptor-ligand binding. Taken together, these results demonstrated that the function of cell adhesion was conserved in mammalian as well as Drosophila Notch family members. Since Notch receptor-ligand interaction plays important roles in a broad spectrum of biological processes ranging from embryogenesis to disorders, our finding will provide a new perspective on these issues from the aspect of cell adhesion.

OBJECTIVE: We previously reported that blockade of the Notch ligand delta-like protein 1 (DLL-1) suppressed osteoclastogenesis and ameliorated arthritis in a mouse model of rheumatoid arthritis (RA). However, the mechanisms by which joint inflammation were suppressed have not yet been revealed. This study was undertaken to determine whether DLL-1 regulates the production of RA-related proinflammatory cytokines. METHODS: Joint cells from mice with collagen-induced arthritis (CIA) and mouse fibroblast-like synoviocytes (FLS) were cultured with or without stimuli in the presence of neutralizing antibodies against Notch ligands, and the production of proinflammatory cytokines was determined by enzyme-linked immunosorbent assay. The expression of Notch receptors and ligands on mouse joint cells was determined by flow cytometry. RESULTS: The production of interleukin-6 (IL-6) and granulocyte-macrophage colony-stimulating factor (GM-CSF) by mouse joint cells with or without stimulation was suppressed by DLL-1 blockade. DLL-1 blockade also suppressed the levels of IL-6 and matrix metalloproteinase 3 (MMP-3) in the joint fluid in a mouse model of RA. However, the production of tumor necrosis factor alpha and IL-1beta was not suppressed by DLL-1 blockade. The production of IL-6 and MMP-3 by mouse FLS was enhanced by DLL-1 stimulation as well as Notch-2 activation. Among joint cells, DLL-1 was not expressed on mouse FLS but was expressed on macrophages. CONCLUSION: These results suggest that the interaction of DLL-1 on mouse joint macrophages with Notch-2 on mouse FLS enhances the production of IL-6 and MMP-3. Therefore, suppression of IL-6, GM-CSF, and MMP-3 production by DLL-1 blockade might be responsible for the amelioration of arthritis in a mouse model of RA.