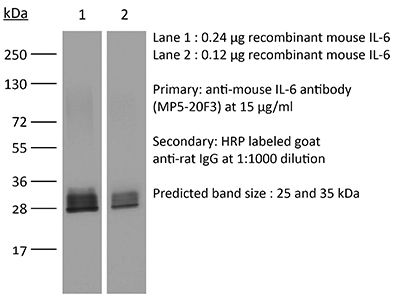 The MP5-20F3 monoclonal antibody reacts with mouse IL-6 (interleukin-6) a 21-28 kDa cytokine that is expressed by many cell types, including T lymphocytes, B lymphocytes, monocytes, fibroblasts, and endothelial cells. IL-6 signals through a cell-surface type I cytokine receptor complex consisting of the ligand-binding IL-6Rα chain (CD126), and the signal-transducing component gp130 (also called CD130). Upon receptor binding IL-6 influences antigen-specific immune responses, inflammatory responses, neuronal development, and is a major mediator of the acute phase reaction. The MP5-20F3 monoclonal antibody has been shown to neutralize the bioactivity of natural or recombinant IL-6.

Host anti-viral innate immunity plays important roles in the defense against HSV-1 infection. In this study, we find an unexpected role for innate LT/LIGHT signaling in promoting HSV-1 replication and virus induced inflammation in immunocompromised mice. Using a model of footpad HSV-1 infection in Rag1(-/-) mice, we observed that blocking LT/LIGHT signaling with LTbetaR-Ig could significantly delay disease progression and extend the survival of infected mice. LTbetaR-Ig treatment reduced late proinflammatory cytokine release in the serum and nervous tissue, and inhibited chemokine expression and inflammatory cells infiltration in the dorsal root ganglia (DRG). Intriguingly, LTbetaR-Ig treatment restricted HSV-1 replication in the DRG but not the footpad. These findings demonstrate a critical role for LT/LIGHT signaling in modulating innate inflammation and promoting HSV-1 replication in the nervous system, and suggest a new target for treatment of virus-induced adverse immune response and control of severe HSV-1 infection.

BACKGROUND: Progression of neurodegenerative diseases occurs when microglia, upon persistent activation, perpetuate a cycle of damage in the central nervous system. Use of mesenchymal stem cells (MSC) has been suggested as an approach to manage microglia activation based on their immunomodulatory functions. In the present study, we describe the mechanism through which bone marrow-derived MSC modulate the proliferative responses of lipopolysaccharide-stimulated BV2 microglia. METHODS: BV2 microglia were cultured with MSC and stimulated with 1 mug/ml lipopolysaccharide. Using an inducible nitric oxide synthase inhibitor, tritiated thymidine (3H-TdR) incorporation assay was performed to determine the role of nitric oxide in the anti-proliferative effect of MSC. We also studied apoptosis and the cell cycle of both cell types using flow cytometry and explored their cytokine profile using protein and cytometric arrays. Moreover, the role of IL-6 and TNF-alpha in immunomodulation was deduced using specific blocking antibodies and recombinant proteins. RESULTS: MSC reduces microglia proliferation upon lipopolysaccharide stimulation by 21 to 28% and modulates the levels of nitric oxide, IL-6 and TNF-alpha. The role of nitric oxide in conferring the anti-proliferative effect of MSC was ruled out. Furthermore, we found that MSC exert their anti-proliferative effect by restoring the percentage of BV2 cells at S and G2/M phase to levels similar to unstimulated cells. MSC undergo a G0/G1 arrest while exerting this effect. We have also identified that MSC-mediated modulation of microglia is independent of IL-6, whilst reduction of TNF-alpha in co-culture is critical for inhibition of microglia proliferation. CONCLUSIONS: Our study demonstrates that MSC inhibit microglia proliferation independent of nitric oxide and IL-6, although reduction of TNF-alpha is critical for this effect. The inhibition of proliferation is through cell cycle modulation. These findings shed light on the mechanisms of microglial immunomodulation by MSC.

Immune reconstitution inflammatory syndrome (IRIS) is a major adverse event of antiretroviral therapy in HIV infection, and paradoxically occurs as HIV viremia is suppressed and CD4 T cell numbers recover. IRIS reflects pathogenic immune responses against opportunistic infections acquired during the period of immunodeficiency, but little is understood about the mechanisms of inflammatory pathology. In this study, we show that IL-6 and C-reactive protein levels transiently rise at the time of the IRIS event in HIV-infected patients, unmasking Mycobacterium avium complex infection after starting antiretroviral therapy. To directly test the role of IL-6 in IRIS pathology, we used a model of experimentally inducible IRIS in which M. avium-infected T cell-deficient mice undergo a fatal inflammatory disease after reconstitution with CD4 T cells. We find that IL-6 neutralization reduces C-reactive protein levels, alleviates wasting disease, and extends host survival during experimental IRIS. Moreover, we show that combined blockade of IL-6 and IFN-gamma further reduces IRIS pathology, even after the onset of wasting disease. The combination of these clinical and experimental-model data show that the IL-6 pathway is not only a biomarker of mycobacterial IRIS but also a major mediator of pathology distinct from IFN-gamma and may be a useful target for therapeutic intervention.

Synthetic glucocorticoids (GCs) are commonly used in the treatment of inflammatory diseases, but the role of endogenous GCs in the regulation of host-protective immune responses is poorly understood. Here we show that GCs are induced during acute Toxoplasma gondii infection and directly control the T cell response to the parasite. When infected with toxoplasma, mice that selectively lack GC receptor (GR) expression in T cells (GR(lck-Cre)) rapidly succumb to infection despite displaying parasite burdens indistinguishable from control animals and unaltered levels of the innate cytokines IL-12 and IL-27. Mortality in the GR(lck-Cre) mice was associated with immunopathology and hyperactive Th1 cell function as revealed by enhanced IFN-gamma and TNF production in vivo. Unexpectedly, these CD4(+) T lymphocytes also overexpressed IL-10. Importantly, CD4(+) T cell depletion in wild-type or GR(lck-Cre) mice led to ablation of the GC response to infection. Moreover, in toxoplasma-infected RAG(-/-) animals, adoptive transfer of CD4(+) T lymphocytes was required for GC induction. These findings establish a novel IL-10-independent immunomodulatory circuit in which CD4(+) T cells trigger a GC response that in turn dampens their own effector function. In the case of T. gondii infection, this self-regulatory pathway is critical for preventing collateral tissue damage and promoting host survival.

Immune responses in newborn mice are known to be biased toward the helper type 2 phenotype. This may account for their propensity to develop tolerance. Herein, we evaluated the effects of IL-4 deprivation on CD4(+) T-cell activities elicited by neonatal exposure to allogeneic spleen cells. We showed that chimerism, Th2-type polarization and pathology, as well as skin allograft acceptance were inhibited in BALB/c mice immunized at birth with (A/J x BALB/c) F(1) spleen cells upon in vivo IL-4 neutralization. While IL-4 neutralization inhibited the development of Th2 cells in this model, it led to the accumulation of IL-17A, IL-17F, IL-22, IL-6 and RORgammat mRNA in the spleen or graft tissues. Moreover, IL-4 deprivation led to the differentiation of donor-specific Th17 cells with a concomitant Th1 response characterized by IFN-gamma production. The Th17-type response emerging in IL-4-deprived mice was found to mediate both intragraft neutrophil infiltration and the abrogation of B-cell chimerism. Neutralization of this Th17 response failed however to restore functional skin graft acceptance. Collectively, our observations indicate that the neonatal Th2 response opposes the development of Th17 cells, and that Th17 cells are responsible for controlling lymphoid chimerism in mice neonatally injected with semiallogeneic cells.

The concentration of Ag or mitogenic stimuli is known to play an important role in controlling the differentiation of naive CD4(+) T cells into different effector phenotypes. In particular, whereas TCR engagement at low Ag doses in the presence of TGF-beta and IL-2 can promote differentiation of Foxp3-expressing induced regulatory T cells (iTregs), high levels of Ag have been shown in vitro and in vivo to prevent Foxp3 upregulation. This tight control of iTreg differentiation dictated by Ag dose most likely determines the quality and duration of an immune response. However, the molecular mechanism by which this high-dose inhibition of Foxp3 induction occurs is not well understood. In this study, we demonstrate that when cells are in the presence of CD28 costimulation, TCR-dependent NF-kappaB signaling is essential for Foxp3 inhibition at high doses of TCR engagement in mouse T cells. Prevention of Foxp3 induction depends on the production of NF-kappaB-dependent cytokines by the T cells themselves. Moreover, T cells that fail to upregulate Foxp3 under iTreg-differentiating conditions and high TCR stimulation acquire the capacity to make TNF and IFN-gamma, as well as IL-17 and IL-9. Thus, NF-kappaB helps T cells control their differentiation fate in a cell-intrinsic manner and prevents peripheral iTreg development under conditions of high Ag load that may require more vigorous effector T cell responses.

Staphylococcus aureus is a common cause of prosthetic implant infections, which can become chronic due to the ability of S. aureus to grow as a biofilm. Little is known about adaptive immune responses to these infections in vivo. We hypothesized that S. aureus elicits inflammatory Th1/Th17 responses, associated with biofilm formation, instead of protective Th2/Treg responses. We used an adapted mouse model of biofilm-mediated prosthetic implant infection to determine chronic infection rates, Treg cell frequencies, and local cytokine levels in Th1-biased C57BL/6 and Th2-biased BALB/c mice. All C57BL/6 mice developed chronic S. aureus implant infection at all time points tested. However, over 75% of BALB/c mice spontaneously cleared the infection without adjunctive therapy and demonstrated higher levels of Th2 cytokines and anti-inflammatory Treg cells. When chronic infection rates in mice deficient in the Th2 cytokine interleukin-4 (IL-4) via STAT6 mutation in a BALB/c background were assessed, the mice were unable to clear the S. aureus implant infection. Additionally, BALB/c mice depleted of Treg cells via an anti-CD25 monoclonal antibody (MAb) were also unable to clear the infection. In contrast, the C57BL/6 mice that were susceptible to infection were able to eliminate S. aureus biofilm populations on infected intramedullary pins once the Th1 and Th17 responses were diminished by MAb treatment with anti-IL-12 p40. Together, these results indicate that Th2/Treg responses are mechanisms of protection against chronic S. aureus implant infection, as opposed to Th1/Th17 responses, which may play a role in the development of chronic infection.