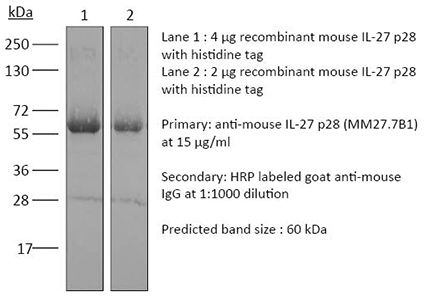 The MM27.7B1 monoclonal antibody reacts with the p28 subunit of mouse IL-27, a member of the IL-6/IL-12 cytokine family. IL-27 is a heterodimeric cytokine composed the EBI3 (Epstein-Barr virus induced gene 3) protein and the p28 subunit, also known as IL-30. Myeloid cells including macrophages, inflammatory monocytes, microglia, and dendritic cells are the dominant cellular sources of IL-27. These cells secrete IL-27 in response to TLR ligands and inflammatory cytokines. IL-27 p28 signals through IL-27 receptors (IL-27R) which are highly expressed by NK cells and activated T cells and to a lesser extent on B cells, naïve T cells, and others. IL-27 signaling has been shown to have both pro-inflammatory and anti-inflammatory effects. Signaling through IL-27R promotes Th1 polarization and IFNγ production but also suppresses the differentiation and proliferation of Th2 and Th17 cells and induces the expression of IL-10. The MM27.7B1 clone has been shown to neutralize the bioactivity of mouse IL-27 in vivo and in vitro and reported to also bind and inhibit human IL-27.

Antibody-mediated lymphoablation is used in solid organ and stem cell transplantation and autoimmunity. Using murine anti-thymocyte globulin (mATG) in a mouse model of heart transplantation, we previously reported that the homeostatic recovery of CD8+ T cells requires help from depletion-resistant memory CD4+ T cells delivered through CD40-expressing B cells. This study investigated the mechanisms by which B cells mediate CD8+ T cell proliferation in lymphopenic hosts. While CD8+ T cell recovery required MHC class I expression in the host, the reconstitution occurred independently of MHC class I, MHC class II, or CD80/CD86 expression on B cells. mATG lymphoablation upregulated the B cell expression of several cytokine genes, including IL-15 and IL-27, in a CD4-dependent manner. Neither treatment with anti-CD122 mAb nor the use of IL-15Ralpha-/- recipients altered CD8+ T cell recovery after mATG treatment, indicating that IL-15 may be dispensable for T cell proliferation in our model. Instead, IL-27 neutralization or the use of IL-27Ralpha-/- CD8+ T cells inhibited CD8+ T cell proliferation and altered the phenotype and cytokine profile of reconstituted CD8+ T cells. Our findings uncover what we believe is a novel role of IL-27 in lymphopenia-induced CD8+ T cell proliferation and suggest that targeting B cell-derived cytokines may increase the efficacy of lymphoablation and improve transplant outcomes.

Genetic variants in il2 and il2ra have been associated with autoimmune disease susceptibility in both genome-wide association studies (GWAS) in humans and in genetic linkage studies in experimental models of autoimmunity. Specifically, genetic variants resulting in a low IL-2 phenotype are susceptibility alleles while variants resulting in a high IL-2 phenotype are resistance alleles. The association of high IL-2 phenotypes with resistance has been attributed primarily to the T cell intrinsic promotion of regulatory T cell development, maintenance, and function; however, IL-2 can also act T cell intrinsically to dampen differentiation of pathogenic IL-17-producing Th17 cells. Here, we have uncovered a novel T cell extrinsic mechanism whereby IL-2 promotes both IFN-gamma and IL-27 production from tissue resident macrophages which in turn dampen the differentiation of pathogenic Th17 cells.

Acute graft versus host disease (aGVHD) remains a life-threatening complication of bone marrow transplantation. Here we show that IL-27, a member of the IL-12 cytokine family, plays an essential role in a parent-to-F1 murine aGVHD model, using B6 mice as parents and B6D2 mice as F1 recipients. IL-27 is transiently detectable in the serum of B6D2 recipients of B6 spleen cells, with a peak at day 10. Treatment with anti-IL-27p28 mAb MM27.7B1 (alphap28Ab), at the time of and six days after B6 cell transfer, blocked GVHD. Protection was associated with host cell survival and undiminished engraftment of donor cells, lack of host B-cell depletion, increased Th2-type immunoglobulin production, a decrease in serum IFN-gamma, a drop in anti-H-2D(d) cytotoxic T lymphocyte activity and an increase in Foxp3(+) T cells. We therefore conclude that IL-27 plays a critical role in the parent-to-F1 model of aGVHD and that blocking IL-27 could have therapeutic relevance.

The aim of this study was to test the hypothesis that gene expression and release of IL-27 may be modulated by Tyk2. Macrophages derived from the peritoneum or bone marrow of C57BL/10SnJ (WT) mice produced abundant amounts of IL-27(p28) following TLR4 activation by LPS. In contrast, production of IL-27(p28), but not EBI3, was reduced by approximately 50% in TLR4-activated macrophages derived from mice with genetic deficiency of Tyk2 compared with WT macrophages. Frequencies of IL-27(p28)+F4/80+CD11b+ cells were lower in TLR4-activated macrophages derived from Tyk2-/- mice. Mechanistically, Tyk2-/- resulted in disruption of a type I IFN-dependent mechanism for production of IL-27(p28), which was induced by type I IFNs, and release of IL-27 was defective in macrophages from IFN-beta-/- and IFNAR1-/- mice. In contrast, Tyk2 was not required to mediate the effects of IL-27 on target gene expression in CD4(+) T cells. In vivo, we observed that Tyk2-/- mice have improved survival following endotoxic shock or polymicrobial sepsis induced by CLP. Plasma levels of IL-27(p28) during endotoxic shock or polymicrobial sepsis were markedly reduced in Tyk2-/- mice compared with WT mice. Disruption of IL-27 signaling using IL-27RA-/- mice was protective against sepsis-associated mortality. These data suggest that Tyk2 may mediate adverse outcomes of SIRS by promoting the production of IL-27. In conclusion, this report identifies Tyk2 as a prerequisite factor in the molecular networks that are involved in generation of IL-27.