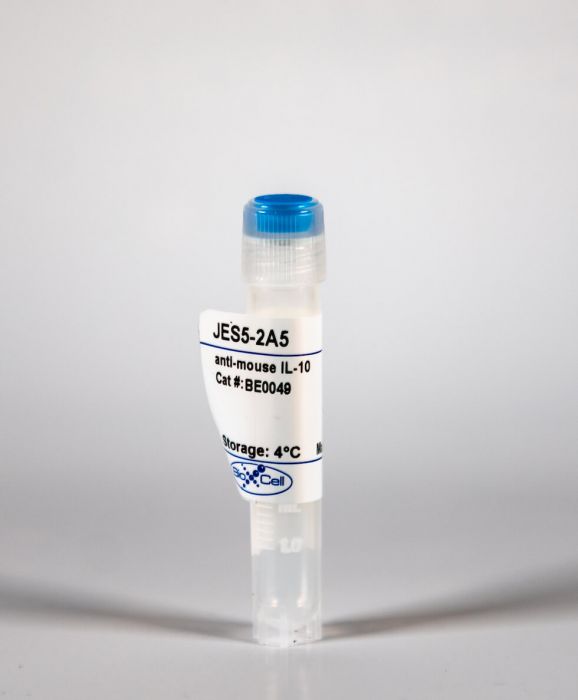 The JES5-2A5 monoclonal antibody reacts with mouse IL-10. IL-10 is a 17-21 kDa cytokine which is primarily produced by monocytes and, to a lesser extent, Th2 cells, mast cells, T regulatory cells, and certain subsets of activated T and B cells. IL-10 has pleiotropic effects in immunoregulation and inflammation. It down-regulates the expression of Th1 cytokines, MHC class II antigens, and costimulatory molecules on macrophages. It also enhances B cell survival, proliferation, and antibody production. This cytokine can block NF-κB activity, and is involved in the regulation of the JAK-STAT signaling pathway. Knockout studies in mice suggest that this cytokine is an essential immunoregulator in the intestinal tract. The JES5-2A5 antibody has been shown to neutralize the bioactivity of natural or recombinant IL-10.

Inhibitory cytokines, such as transforming growth factor-beta (TGF-beta) and interleukin-10 (IL-10), are humoral factors involved in the suppressive function of regulatory T cells and play critical roles in maintaining immune homeostasis. However, TGF-beta and IL-10 also have pleiotropic effects and induce humoral immune responses depending on conditions, and thus their therapeutic application to autoimmune diseases remains limited. Here, we show that a combination of TGF-beta and IL-10, but not single cytokine, is required to suppress B cell activation induced by toll-like receptor (TLR) stimulation. In in vivo analyses, the simultaneous presence of TGF-beta and IL-10 effectively suppressed TLR-mediated antigen-specific immune responses and ameliorated pathologies in imiquimod (TLR7 agonist)-induced lupus model and lupus-prone MRL/lpr mice. Intriguingly, TGF-beta and IL-10 synergistically modulated transcriptional programs and suppressed cellular energetics of both glycolysis and oxidative phosphorylation via inhibition of the mammalian target of rapamycin complex 1 (mTORC1)/S6 kinase 1 (S6K1) pathway in TLR-stimulated B cells. On the other hand, enhancement of mTOR signaling and mitochondrial biosynthesis in TLR-stimulated B cells counteracted the synergistic inhibitory effects. The inhibitory cytokine synergy of TGF-beta and IL-10 via suppression of energy metabolism was also observed in human TLR-stimulated B cells. There is increasing evidence supporting the importance of adequate metabolic signals in various immune cells to exert their immune function. In this study, we have shown that a previously unrecognized synergy of inhibitory cytokines regulates systemic humoral immune responses via modulating immunometabolism in B cells. Our findings indicate that inhibition of B cell metabolism mediated by two synergistic cytokines contributes to the induction of immune tolerance and could be a new therapeutic strategy for autoimmune diseases such as systemic lupus erythematosus.

Women diagnosed with breast cancer within 5 years postpartum have poor survival rates. The process of postpartum mammary gland involution, whereby the lactating gland remodels to its prepregnant state, promotes breast cancer progression in xenograft models. Macrophage influx occurs during mammary gland involution, implicating immune modulation in the promotion of postpartum breast cancer. Herein, we characterize the postpartum murine mammary gland and find an orchestrated influx of immune cells similar to that which occurs during wound healing. Further, the normal involuting gland may be in an immunosuppressed state as discerned by the transient presence of Foxp3(+) regulatory T cells and IL-10(+) macrophages with T cell suppressive function. To determine the influence of the postpartum immune microenvironment on mammary tumor promotion, we developed an immune-competent model. In this model, mammary tumors in the involution group are sixfold larger than nulliparous group tumors, have decreased CD4(+) and CD8(+) T cell infiltrates and contain a greater number of macrophages with the ability to inhibit T cell activation. Targeting involution with a neutralizing antibody against the immunosuppressive cytokine IL-10 reduces tumor growth in involution group mice but not in nulliparous mice, implicating the involution microenvironment as the primary target of alphaIL-10 treatment. Relevance to women is implicated, as we find postlactational human breast tissue has transient high IL-10(+) and Foxp3(+) immune cell infiltrate. These data show an immune modulated microenvironment within the normal involuting mammary gland suggestive of immunosuppression, that when targeted reduces tumor promotion, revealing possible immune-based strategies for postpartum breast cancer.

The TH9 subset of helper T cells was initially shown to contribute to the induction of autoimmune and allergic diseases, but subsequent evidence has suggested that these cells also exert antitumor activities. However, the molecular events that account for their effector properties are elusive. Here we found that the transcription factor IRF1 enhanced the effector function of TH9 cells and dictated their anticancer properties. Under TH9-skewing conditions, interleukin 1beta (IL-1beta) induced phosphorylation of the transcription factor STAT1 and subsequent expression of IRF1, which bound to the promoters of Il9 and Il21 and enhanced secretion of the cytokines IL-9 and IL-21 from TH9 cells. Furthermore, IL-1beta-induced TH9 cells exerted potent anticancer functions in an IRF1- and IL-21-dependent manner. Our findings thus identify IRF1 as a target for controlling the function of TH9 cells.

The exact nature of the immune response elicited by autologous-induced pluripotent stem cell (iPSC) progeny is still not well understood. Here we show in murine models that autologous iPSC-derived endothelial cells (iECs) elicit an immune response that resembles the one against a comparable somatic cell, the aortic endothelial cell (AEC). These cells exhibit long-term survival in vivo and prompt a tolerogenic immune response characterized by elevated IL-10 expression. In contrast, undifferentiated iPSCs elicit a very different immune response with high lymphocytic infiltration and elevated IFN-gamma, granzyme-B and perforin intragraft. Furthermore, the clonal structure of infiltrating T cells from iEC grafts is statistically indistinguishable from that of AECs, but is different from that of undifferentiated iPSC grafts. Taken together, our results indicate that the differentiation of iPSCs results in a loss of immunogenicity and leads to the induction of tolerance, despite expected antigen expression differences between iPSC-derived versus original somatic cells.

We evaluated the therapeutic efficacy and mechanisms of action of both mouse and human B7-H4 Immunoglobulin fusion proteins (mB7-H4Ig; hB7-H4Ig) in treating EAE. The present data show that mB7-H4Ig both directly and indirectly (via increasing Treg function) inhibited CD4(+) T-cell proliferation and differentiation in both Th1- and Th17-cell promoting conditions while inducing production of IL-10. B7-H4Ig treatment effectively ameliorated progression of both relapsing (R-EAE) and chronic EAE correlating with decreased numbers of activated CD4(+) T-cells within the CNS and spleen, and a concurrent increase in number and function of Tregs. The functional requirement for Treg activation in treating EAE was demonstrated by a loss of therapeutic efficacy of hB7-H4Ig in R-EAE following inactivation of Treg function either by anti-CD25 treatment or blockade of IL-10. Significant to the eventual translation of this treatment into clinical practice, hB7-H4Ig similarly inhibited the in vitro differentiation of naive human CD4(+) T-cells in both Th1- and Th17-promoting conditions, while promoting the production of IL-10. B7-H4Ig thus regulates pro-inflammatory T-cell responses by a unique dual mechanism of action and demonstrates significant promise as a therapeutic for autoimmune diseases, including MS.

TLR9-deficient (TLR9(-)/(-)) NOD mice develop a significantly reduced incidence of diabetes. This study was to investigate the molecular mechanisms of the protective role of TLR9 deficiency. Through gene screening and confirmation by both mRNA and protein expression, we found a significant increase in CD73-expressing immune cells from peripheral lymphoid tissues in TLR9(-)/(-) NOD mice. The elevated frequency of CD73-expressing immune cells seemed to be specific for TLR9 deficiency and was MyD88 independent. Moreover, the increased frequency of CD73 expression was limited to the NOD background. Increased frequency of CD73 expression was also associated with lower levels of proinflammatory cytokines and more anti-inflammatory cytokine production in CD4(+) T cells in TLR9(-)/(-) NOD mice. Purified CD73(+)CD4(+) T cells showed stronger immunosuppressive function in vitro and delayed diabetes development in vivo. The immunosuppression appeared to be mediated by TGF-beta. In addition, elevated frequency of CD73-expressing cells was associated with improved beta cell function. Our observations were further confirmed by protection from diabetes with similar alterations in CD73 in the NY8.3 TCR NOD mouse model crossed with TLR9(-)/(-) mice and by the use of a TLR9 inhibitor in NOD mice. Our novel findings suggest an important immune-regulatory role of CD73 in regulation of diabetes development and may offer a new therapeutic strategy for specific intervention to prevent type 1 diabetes.

Sepsis continues to cause significant morbidity and mortality in critically ill patients. Studies of patients and animal models have revealed that changes in the immune response during sepsis play a decisive role in the outcome. Using a clinically relevant two-hit model of sepsis, i.e., cecal ligation and puncture (CLP) followed by the induction of Pseudomonas aeruginosa pneumonia, we characterized the host immune response. Second, AS101 [ammonium trichloro(dioxoethylene-o,o’)tellurate], a compound that blocks interleukin 10 (IL-10), a key mediator of immunosuppression in sepsis, was tested for its ability to reverse immunoparalysis and improve survival. Mice subjected to pneumonia following CLP had different survival rates depending upon the timing of the secondary injury. Animals challenged with P. aeruginosa at 4 days post-CLP had approximately 40% survival, whereas animals challenged at 7 days had 85% survival. This improvement in survival was associated with decreased lymphocyte apoptosis, restoration of innate cell populations, increased proinflammatory cytokines, and restoration of gamma interferon (IFN-gamma) production by stimulated splenocytes. These animals also showed significantly less P. aeruginosa growth from blood and bronchoalveolar lavage fluid. Importantly, AS101 improved survival after secondary injury 4 days following CLP. This increased survival was associated with many of the same findings observed in the 7-day group, i.e., restoration of IFN-gamma production, increased proinflammatory cytokines, and decreased bacterial growth. Collectively, these studies demonstrate that immunosuppression following initial septic insult increases susceptibility to secondary infection. However, by 7 days post-CLP, the host’s immune system has recovered sufficiently to mount an effective immune response. Modulation of the immunosuppressive phase of sepsis may aid in the development of new therapeutic strategies.

Type 1 diabetes (T1D) is a T cell-mediated autoimmune disease that targets the beta-cells of the pancreas. We investigated the ability of soluble galectin-1 (gal-1), an endogenous lectin that promotes T cell apoptosis, to down-regulate the T cell response that destroys the pancreatic beta-cells. We demonstrated that in nonobese diabetic (NOD) mice, gal-1 therapy reduces significantly the amount of Th1 cells, augments the number of T cells secreting IL-4 or IL-10 specific for islet cell Ag, and causes peripheral deletion of beta-cell-reactive T cells. Administration of gal-1 prevented the onset of hyperglycemia in NOD mice at early and subclinical stages of T1D. Preventive gal-1 therapy shifted the composition of the insulitis into an infiltrate that did not invade the islets and that contained a significantly reduced number of Th1 cells and a higher percentage of CD4(+) T cells with content of IL-4, IL-5, or IL-10. The beneficial effects of gal-1 correlated with the ability of the lectin to trigger apoptosis of the T cell subsets that cause beta-cell damage while sparing naive T cells, Th2 lymphocytes, and regulatory T cells in NOD mice. Importantly, gal-1 reversed beta-cell autoimmunity and hyperglycemia in NOD mice with ongoing T1D. Because gal-1 therapy did not cause major side effects or beta-cell toxicity in NOD mice, the use of gal-1 to control beta-cell autoimmunity represents a novel alternative for treatment of subclinical or ongoing T1D.