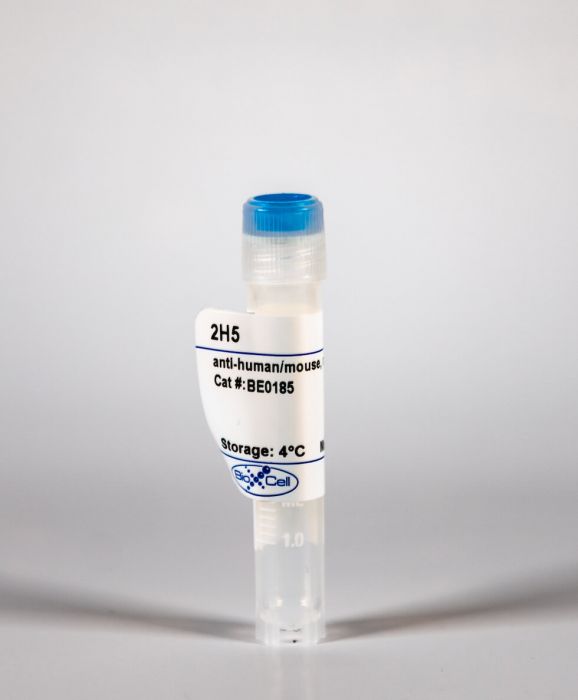 The 2H5 antibody reacts with mouse, human, and rat CCL2 also known as monocyte chemoattractant protein 1 (MCP-1). CCL2 is a 13 kDa chemokine that is produced mainly by monocytes/macrophages but is also expressed by endothelial, fibroblasts, epithelial, smooth muscle, mesangial, astrocytic, and microglial cells. It can be expressed constitutively or after induction by oxidative stress, cytokines, or growth factors. CCL2 regulates the migration and infiltration of monocytes, memory T lymphocytes, and NK cells and is implicated in the pathogeneses of several diseases characterized by monocytic infiltrates, such as multiple sclerosis, psoriasis, rheumatoid arthritis, and atherosclerosis. The 2H5 antibody has been shown to neutralize the biological effects of CCL2 in vivo.

Chemokines are small chemotactic proteins that have a crucial role in leukocyte recruitment into tissue. Targeting these mediators has been suggested as a potential therapeutic option in inflammatory skin diseases such as psoriasis. Using quantitative RT-PCR, we found CCL7, a chemokine ligand known to interact with multiple C-C chemokine receptors, to be markedly increased in lesional psoriasis as opposed to atopic dermatitis, lichen planus, non-lesional psoriatic and normal control skin. Surprisingly, this increase in CCL7 mRNA expression exceeded that of all other chemokines investigated, and keratinocytes and dermal blood endothelial cells were identified as its likely cellular sources. In an imiquimod-induced psoriasis-like mouse model, CCL7 had a profound impact on myeloid cell inflammation as well as on the upregulation of key pro-psoriatic cytokines such as CCL20, IL-12p40 and IL-17C, while its blockade led to an increase in the antipsoriatic cytokine IL-4. In humans receiving the TNF-alpha-blocker infliximab, CCL7 was downregulated in lesional psoriatic skin already within 16 hours after a single intravenous infusion. These data suggest that CCL7 acts as a driver of TNF-alpha-dependent Th1/Th17-mediated inflammation in lesional psoriatic skin.

Intratumoral immune activation can induce local and systemic antitumor immunity. Imiquimod is a cream-formulated, TLR7 agonist that is Food and Drug Administration approved for the treatment of nonmelanoma skin cancers, but it has limited activity against melanoma. We studied the antitumor activity and mechanism of action of a novel, injectable, tissue-retained TLR7/8 agonist, 3M-052, which avoids systemic distribution. Intratumoral administration of 3M-052 generated systemic antitumor immunity and suppressed both injected and distant, uninjected wild-type B16.F10 melanomas. Treated tumors showed that an increased level of CCL2 chemokines and infiltration of M1 phenotype-shifted macrophages, which could kill tumor cells directly through production of NO and CCL2, were essential for the antitumor activity of 3M-052. CD8(+) T cells, B cells, type I IFN, IFN-gamma, and plasmacytoid dendritic cells were contributed to efficient tumor suppression, whereas perforin, NK cells, and CD4 T cells were not required. Finally, 3M-052 therapy potentiated checkpoint blockade therapy with anti-CTLA-4 and anti-programmed death ligand 1 Abs, even when checkpoint blockade alone was ineffective. Our findings suggest that intratumoral treatment with 3M-052 is a promising approach for the treatment of cancer and establish a rational strategy and mechanistic understanding for combination therapy with intratumoral, tissue-retained TLR7/8 agonist and checkpoint blockade in metastatic cancer.

PURPOSE: To characterize the roles played by monocyte chemoattractant protein-1 and its preferential receptor CCR2 (MCP-1/CCL2) in acute allergic inflammation. METHODS: The direct effects of MCP-1 were evaluated histologically after a subconjunctival injection of recombinant MCP-1 into naive mice. The mice were sensitized to ragweed pollen, and allergic conjunctivitis was induced by an allergen challenge. The location of the induced MCP-1 was determined by immunohistochemistry. Anti-MCP-1 antibody and CCR2-specific antagonist, RS 504393, were used to determine whether an inhibition of MCP-1 or CCR2 signals would suppress the allergen-induced immediate hypersensitivity reaction. The effect of blocking CCR2 was tested in vitro with isolated mast cells from connective tissue, to evaluate the co-stimulatory signals mediated by CCR2 in mast cells directly. RESULTS: A subconjunctival injection of MCP-1 stimulated conjunctival mast cell degranulation and recruited monocytes/macrophages. In the allergic conjunctivitis model, the allergen-induced MCP-1 protein was located in the monocytes/macrophages in the substantia propria of the conjunctiva. Blocking MCP-1 significantly suppressed the allergen-induced clinical signs and mast cell degranulation without affecting the allergen-specific IgE, or the release of Th2 cytokine from the isolated draining lymph node cells. Inhibition of CCR2 similarly suppressed the acute inflammatory responses. Consistent with the outcome of the disease model, inhibition of CCR2 suppressed allergen-specific degranulation of IgE-primed, isolated conjunctival mast cells. CONCLUSIONS: Stimulation of the co-stimulatory axis of CCR2 by MCP-1 is essentially required for mast cell-mediated hypersensitivity reactions in mouse eyes.