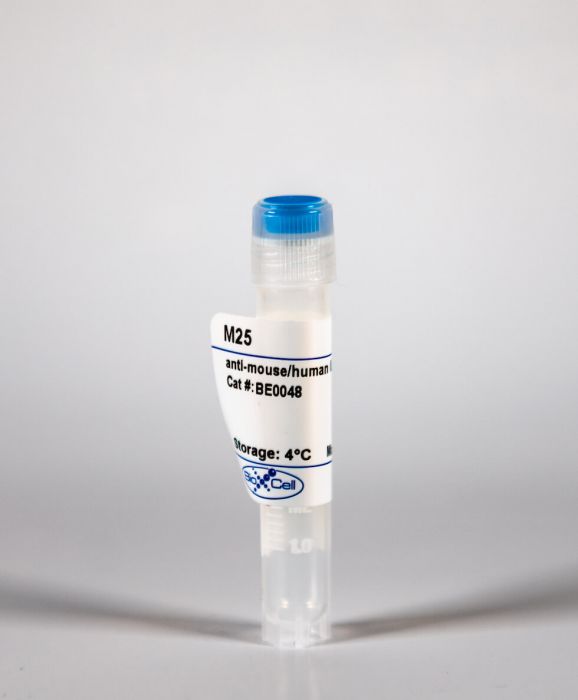 The M25 monoclonal antibody reacts with mouse and human IL-7, a 20-28 kDa hematopoietic growth factor secreted by stromal cells in the bone marrow and thymus. IL-7 is also produced by keratinocytes, dendritic cells, hepatocytes, neurons, and epithelial cells. IL-7 binds to the IL-7 receptor, a heterodimer consisting of IL-7 receptor alpha and the common gamma chain receptor. Binding results in stimulation of differentiation of pluripotent hematopoietic stem cells into lymphoid progenitor cells and proliferation of all lymphoid cells. IL-7 is also important for proliferation of pre-B cells as well as T and NK cell survival, development and homeostasis. The M25 antibody is useful for neutralizing the bioactivity of IL-7 as well as administration of IL-7 cytokine. IL-7 administration as a complex with M25 prolongs IL-7 availability in vivo by decreasing specific and nonspecific consumption.

IL-17-producing CD4(+) T (Th17) cells, along with IFN-gamma-expressing Th1 cells, represent two major pathogenic T cell subsets in experimental autoimmune encephalomyelitis (EAE), the animal model of multiple sclerosis (MS). The cytokines and transcription factors involved in the development and effector functions of Th1 and Th17 cells have been largely characterized. Among them, IL-23 is essential for the generation of stable and encephalitogenic Th17 cells and for the development of EAE. The IL-7/IL-7R signaling axis participates in cell survival, and perturbation of this pathway has been associated with enhanced susceptibility to MS. A link between IL-23-driven pathogenic T cells and IL-7/IL-7R signaling has previously been proposed, but has not been formally addressed. In the current study, we showed that Th17 cells from mice with EAE express high levels of IL-7Ralpha compared with Th1 cells. Using mice that constitutively express IL-7Ralpha on T cells, we determined that sustained IL-7R expression in IL-23R-deficient mice could not drive pathogenic T cells and the development of EAE. IL-7 inhibited the differentiation of Th17 cells, but promoted IFN-gamma and GM-CSF secretion in vitro. In vivo IL-7/anti-IL-7 mAb complexes selectively expanded and enhanced the proliferation of CXCR3-expressing Th1 cells, but did not impact Th17 cells and EAE development in wild-type and IL-23R-deficient mice. Importantly, high IL-7 expression was detected in the CNS during EAE and could drive the plasticity of Th17 cells to IFN-gamma-producing T cells. Together, these data address the contribution of IL-23/IL-23R and IL-7/IL-7R signaling in Th17 and Th1 cell dynamics during CNS autoimmunity.

HIV infection and the associated chronic immune activation alter T cell homeostasis leading to CD4 T cell depletion and CD8 T cell expansion. The mechanisms behind these outcomes are not totally defined and only partially explained by the direct cytopathic effect of the virus. In this manuscript, we addressed the impact of lymphopenia and chronic exposure to IFN-alpha on T cell homeostasis. In a lymphopenic murine model, this interaction led to decreased CD4 counts and CD8 T cell expansion in association with an increase in the Signal Transducer and Activator of Transcription 1 (STAT1) levels resulting in enhanced CD4 T cell responsiveness to IFN-alpha. Thus, in the setting of HIV infection, chronic stimulation of this pathway could be detrimental for CD4 T cell homeostasis.

Natural killer T (NKT) cells are innate-like T cells that rapidly recognize pathogens and produce cytokines that shape the ensuing immune response. IL-17-producing NKT cells are enriched in barrier tissues, such as the lung, skin, and peripheral lymph nodes, and the factors that maintain this population in the periphery have not been elucidated. Here we show that NKT17 cells deviate from other NKT cells in their survival requirements. In contrast to conventional NKT cells that are maintained by IL-15, RORgammat(+) NKT cells are IL-15 independent and instead rely completely on IL-7. IL-7 initiates a T-cell receptor-independent (TCR-independent) expansion of NKT17 cells, thus supporting their homeostasis. Without IL-7, survival is dramatically impaired, yet residual cells remain lineage committed with no downregulation of RORgammat evident. Their preferential response to IL-7 does not reflect enhanced signaling through STAT proteins, but instead is modulated via the PI3K/AKT/mTOR signaling pathway. The ability to compete for IL-7 is dependent on high-density IL-7 receptor expression, which would promote uptake of low levels of IL-7 produced in the non-lymphoid sites of lung and skin. This dependence on IL-7 is also reported for RORgammat(+) innate lymphoid cells and CD4(+) Th17 cells, and suggests common survival requirements for functionally similar cells.

Cervical thymus mimics the thoracic thymus in supporting T-cell development and exists in a subset of mice and humans. Importantly, it remains unknown whether the cervical thymus can generate T cells that are self-tolerant in the complete absence of signals from the thoracic thymus. Using a fetal liver reconstitution model in thoracic thymectomized RAG(-/-) mice, we found that T cells could be generated without contribution from the thoracic thymus. However, these mice had decreased T cells, increased proportions of effector memory T cells and Treg phenotype cells, increased serum IgG1/2b, and increased frequency of T cells expressing IFN-gamma, IL-17 or IL-10. Half of the mice that received a thoracic thymectomy and fetal liver cells, unlike sham surgery controls, developed substantial morbidity with age. Disease was associated with lymphopenia-driven activation rather than inherent defects in the cervical thymus, as both thoracic and cervical thymocytes could generate disease in lymphopenic recipients. Administration of the homeostatic cytokine IL-7 caused a rapid, transient increase in T-cell numbers and reduced the time to disease onset. Together the data suggests that the cervical thymus can function in the complete absence of the thoracic thymus; however, the T cells generated do not establish homeostasis.

Several clinical trials have shown anti-CD3 treatment to be a promising therapy for autoimmune diabetes, but its mechanism of action remains unclear. Foxp3(+) regulatory T cells (Tregs) are likely to be involved, but through unknown mechanistic pathways. We profiled the transcriptional consequences in CD4(+) Tregs and conventional T cells (Tconvs) in the first hours and days after anti-CD3 treatment of NOD mice. Anti-CD3 treatment led to a transient transcriptional response, terminating faster than most Ag-induced responses. Most transcripts were similarly induced in Tregs and Tconvs, but several were differential, in particular, those encoding the IL-7R and transcription factors Id2/3 and Gfi1, upregulated in Tregs but repressed in Tconvs. Because IL-7R was a plausible candidate for driving the homeostatic response of Tregs to anti-CD3, we tested its relevance by supplementation of anti-CD3 treatment with IL-7/anti-IL-7 complexes. Although ineffective alone, IL-7 significantly improved the rate of remission induced by anti-CD3. Four anti-human CD3 mAbs exhibited the same differential effect on IL-7R expression in human as in mouse cells, suggesting that the mechanism also underlies therapeutic effect in human cells, and perhaps a rationale for testing a combination of anti-CD3 and IL-7 for the treatment of recent-onset human type 1 diabetes. Thus, systems-level analysis of the response to anti-CD3 in the early phase of the treatment demonstrates different responses in Tregs and Tconvs, and provides new leads to a mechanistic understanding of its mechanism of action in reverting recent-onset diabetes.

Mechanisms governing peripheral CD4+ FOXP3+ regulatory T cells (Treg) survival and homeostasis are multiple suggesting tight and complex regulation of regulatory T cells homeostasis. Some specific factors, such as TGF-beta, interleukin-2 (IL-2) and B7 costimulatory molecules have been identified as essentials for maintenance of the peripheral Treg compartment. Conversely, Treg dependency upon classical T cell homeostatic factors such as IL-7 is still unclear. In this work, we formally investigated the role of IL-7 in Treg homeostasis in vivo in murine models. We demonstrated that IL-7 availability regulated the size of peripheral Treg cell pool and thus paralleled the impact of IL-7 on conventional T cell pool. Moreover, we showed that IL-7 administration increased Treg cell numbers by inducing thymic-independent Treg peripheral expansion. Importantly the impact of IL-7 on Treg expansion was detected whether conventional T cells were present or absent as IL-7 directly participates to the peripheral expansion of Treg after adoptive transfer into lymphopenic hosts. Our results definitively identify IL-7 as a central factor contributing to Treg peripheral homeostasis, thus reassembling Treg to other T cell subsets in respect of their need for IL-7 for their peripheral maintenance.