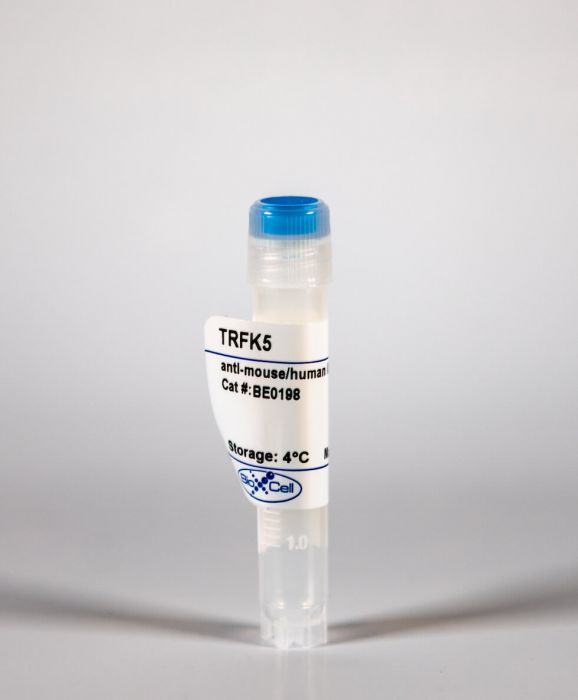 The TRFK5 monoclonal antibody reacts with mouse and human interleukin-5 (IL-5), a 26 kDa homodimeric cytokine. IL-5 stimulates B lymphocyte differentiation and proliferation and increases the secretion of IgM and IgA. It is also a key mediator in eosinophil activation and differentiation. IL-5 has long been associated with the cause of several allergic diseases including allergic rhinitis and asthma, wherein a large increase in the number of circulating, airway tissue, and induced sputum eosinophils have been observed. The TRFK5 antibody has been shown to neutralize the bioactivity of natural or recombinant IL-5.

Checkpoint blockade with antibodies specific for cytotoxic T lymphocyte-associated protein (CTLA)-4 or programmed cell death 1 (PDCD1; also known as PD-1) elicits durable tumor regression in metastatic cancer, but these dramatic responses are confined to a minority of patients. This suboptimal outcome is probably due in part to the complex network of immunosuppressive pathways present in advanced tumors, which are unlikely to be overcome by intervention at a single signaling checkpoint. Here we describe a combination immunotherapy that recruits a variety of innate and adaptive immune cells to eliminate large tumor burdens in syngeneic tumor models and a genetically engineered mouse model of melanoma; to our knowledge tumors of this size have not previously been curable by treatments relying on endogenous immunity. Maximal antitumor efficacy required four components: a tumor-antigen-targeting antibody, a recombinant interleukin-2 with an extended half-life, anti-PD-1 and a powerful T cell vaccine. Depletion experiments revealed that CD8+ T cells, cross-presenting dendritic cells and several other innate immune cell subsets were required for tumor regression. Effective treatment induced infiltration of immune cells and production of inflammatory cytokines in the tumor, enhanced antibody-mediated tumor antigen uptake and promoted antigen spreading. These results demonstrate the capacity of an elicited endogenous immune response to destroy large, established tumors and elucidate essential characteristics of combination immunotherapies that are capable of curing a majority of tumors in experimental settings typically viewed as intractable.

Asthma is generally thought to confer an increased risk for invasive pneumococcal disease (IPD) in humans. However, recent reports suggest that mortality rates from IPD are unaffected in patients with asthma and that chronic obstructive pulmonary disease (COPD), a condition similar to asthma, protects against the development of complicated pneumonia. To clarify the effects of asthma on the subsequent susceptibility to pneumococcal infection, ovalbumin (OVA)-induced allergic lung inflammation (ALI) was induced in mice followed by intranasal infection with A66.1 serotype 3 Streptococcus pneumoniae. Surprisingly, mice with ALI were significantly more resistant to lethal infection than non-ALI mice. The heightened resistance observed following ALI correlated with enhanced early clearance of pneumococci from the lung, decreased bacterial invasion from the airway into the lung tissue, a blunted inflammatory cytokine and neutrophil response to infection, and enhanced expression of transforming growth factor beta1 (TGF-beta1). Neutrophil depletion prior to infection had no effect on enhanced early bacterial clearance or resistance to IPD in mice with ALI. Although eosinophils recruited into the lung during ALI appeared to be capable of phagocytizing bacteria, neutralization of interleukin-5 (IL-5) to inhibit eosinophil recruitment likewise had no effect on early clearance or survival following infection. However, enhanced resistance was associated with an increase in levels of clodronate-sensitive, phagocytic SiglecF(low) alveolar macrophages within the airways following ALI. These findings suggest that, while the risk of developing IPD may actually be decreased in patients with acute asthma, additional clinical data are needed to better understand the risk of IPD in patients with different asthma phenotypes.

The role of intestinal eosinophils in immune homeostasis is enigmatic and the molecular signals that drive them from protective to tissue damaging are unknown. Most commonly associated with Th2 cell-mediated diseases, we describe a role for eosinophils as crucial effectors of the interleukin-23 (IL-23)-granulocyte macrophage colony-stimulating factor (GM-CSF) axis in colitis. Chronic intestinal inflammation was characterized by increased bone marrow eosinopoiesis and accumulation of activated intestinal eosinophils. IL-5 blockade or eosinophil depletion ameliorated colitis, implicating eosinophils in disease pathogenesis. GM-CSF was a potent activator of eosinophil effector functions and intestinal accumulation, and GM-CSF blockade inhibited chronic colitis. By contrast neutrophil accumulation was GM-CSF independent and dispensable for colitis. In addition to TNF secretion, release of eosinophil peroxidase promoted colitis identifying direct tissue-toxic mechanisms. Thus, eosinophils are key perpetrators of chronic inflammation and tissue damage in IL-23-mediated immune diseases and it suggests the GM-CSF-eosinophil axis as an attractive therapeutic target.

Diffuse pulmonary hemorrhage (DPH) is an uncommon but critical complication of systemic lupus erythematosus. Peritoneal administration of 2,6,10,14-tetramethylpentadecane (pristane) can recapitulate a lupus-like syndrome in mice, which can develop into DPH within a few weeks, especially in C57BL/6 mice. Mac-1 (CD11b/CD18), a leukocyte adhesion molecule, is known to play a role in inflammation by regulating migration of leukocytes into injured tissue. In this study, we aimed to clarify the role of Mac-1 in pristane-induced DPH, using Mac-1(-/-) and wild-type (WT) mice on a C57BL/6 background. After pristane injection, Mac-1(-/-) mice showed reduced prevalence of DPH and attenuated peritonitis compared with WT mice. Analysis of the peritoneal lavage on days 5 and 10 after pristane treatment revealed increased numbers of eosinophils and alternatively activated macrophages, but decreased numbers of neutrophils and classically activated macrophages in Mac-1(-/-) mice compared with WT. Enhanced production of IL-4 and IL-13, both key mediators of macrophage polarization toward the mannose receptor(+) (MMR(+)) phenotype, was observed in the peritoneal cavity of Mac-1(-/-) mice. Depletion of neutrophils and eosinophils or adoptive transfer of classically activated macrophages resulted in the exacerbation of pristane-mediated DPH in both WT and Mac-1(-/-) mice. Moreover, peritoneal transfer of F4/80(high)MMR(+) alternatively activated macrophages successfully reduced the prevalence of DPH in WT mice. Collectively, Mac-1 promoted acute inflammatory responses in the peritoneal cavity and the lungs by downregulating granulocyte migration and subsequent phenotypic conversion of macrophages in a pristane-induced systemic lupus erythematosus model.