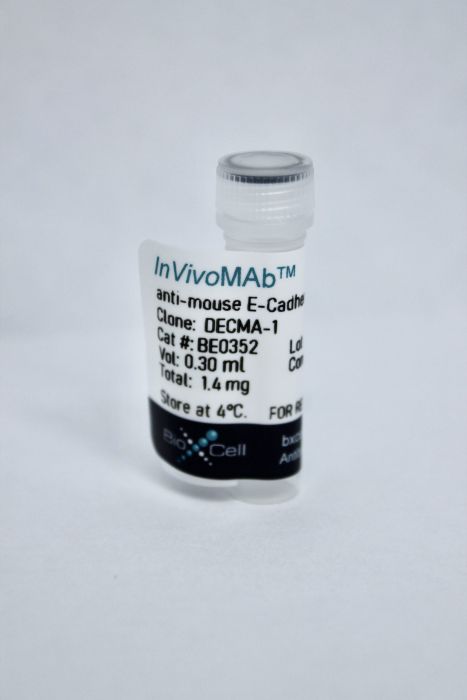 The DECMA-1 monoclonal antibody reacts with the extracellular domain of mouse E-Cadherin, a 120-kDa transmembrane cell-cell adhesion glycoprotein also known as CD324 and uvomorulin. E-Cadherin is widely expressed on epithelial cells in the colon, uterus, liver, keratinocytes, brain, heart, muscle, kidney, and pancreas as well as erythroid cells. E-Cadherin is a critical regulator of epithelial junction formation. Its association with catenins is necessary for cell-to-cell adhesion. E-Cadherin is involved in development, bacterial pathogenesis, and tumor invasion. The DECMA-1 antibody has been shown to delay tumor onset and attenuate tumor burden in MMTV-PyMT mice by reducing tumor cell proliferation and inducing apoptosis without any detectable cytotoxicity.

Treating neuropathic pain is a major clinical challenge, and several key molecules associated with nociception have been suggested as potential targets for novel analgesics. Many studies have reported the anti-nociceptive effects of glial cell-derived neurotrophic factor (GDNF), but the underlying mechanism remains largely unknown. The present study was performed to assess the effects of GDNF in a mouse model of chronic constriction injury (CCI)-induced neuropathic pain. We also determined the potential role of E-cadherin/p120 catenin (p120ctn) signaling in these effects. Mice received an intrathecal acute injection of PBS, GDNF, and DECMA-1 (an E-cadherin functional blocking antibody) or a combination of DECMA-1 with GDNF on the testing days. Our results demonstrated that CCI caused a rapid decrease in E-cadherin and membrane-associated p120ctn in the spinal dorsal horn. Together, these data demonstrated that E-cadherin-associated p120ctn was upregulated by GDNF and that this upregulation was inhibited by pre-treatment with DECMA-1. Moreover, DECMA-1 significantly inhibited the effect of GDNF on thermal hyperalgesia. These data suggest that GDNF might have a therapeutic potential for the treatment of CCI-induced neuropathic pain and that the E-cadherin/p120ctn might play a role in GDNF-induced attenuation of thermal hyperalgesia.

PURPOSE: Although targeted therapies against HER2 have been one of the most successful therapeutic strategies for breast cancer, patients eventually developed acquired resistance from compensatory upregulation of alternate HERs and mitogen-activated protein kinase-phosphoinositide 3-kinase (PI3K)/Akt/mTOR signaling. As we and others have shown that the soluble ectodomain fragment of E-cadherin exerts prooncogenic effects via HER1/2-mediated binding and activation of downstream prosurvival pathways, we explored whether targeting this ectodomain [DECMA-1 monoclonal antibody (mAb)] was effective in the treatment of HER2-positive (HER2(+)) breast cancers. EXPERIMENTAL DESIGN: MMTV-PyMT transgenic mice and HER2(+)/E-cadherin-positive MCF-7 and BT474 trastuzumab-resistant (TtzmR) cells were treated with the DECMA-1 mAb. Antitumor responses were assessed by bromodeoxyuridine incorporation, apoptosis, and necrosis. The underlying intracellular prooncogenic pathways were explored using subcellular fractionation, immunoprecipitation, fluorescence microscopy, and immunoblotting. RESULTS: Treatment with DECMA-1 mAb significantly delayed tumor onset and attenuated tumor burden in MMTV-PyMT mice by reducing tumor cell proliferation and inducing apoptosis without any detectable cytotoxicity to mice or end-organs. In vitro treatment of MCF-7 and BT474 TtzmR cells reduced proliferation and induced cancer cell apoptosis. Importantly, this inhibition of breast tumorigenesis was due to concomitant downregulation, via ubiquitin-mediated degradation through the lysosome and proteasome pathways, of all HER family members, components of downstream PI3K/Akt/mTOR prosurvival signaling and suppression of inhibitor of apoptosis proteins. CONCLUSIONS: Our results establish that the E-cadherin ectodomain-specific mAb DECMA-1 inhibits Ecad(+)/HER2(+) breast cancers by hindering tumor growth and inducing apoptosis via downregulation of key oncogenic pathways involved in trastuzumab resistance, thereby establishing a novel therapeutic platform for the treatment of HER2(+) breast cancers.

The assembly and permanent sealing of tight junctions (TJs) depend crucially on cell-cell contacts containing E-cadherin. This poses a puzzling problem because, while TJs can be established between epithelial cells from different tissues and even different animal species (“heterotypic TJs”; Gonzalez-Mariscal et al. 1989, J Membr Biol 107:43), the cell-cell binding mediated by E-cadherin is a highly specific one (Takeichi 1995, Curr Opin Cell Biol 7:619). Yet the demonstration that TJs can be established at heterotypic borders is open to two distinct challenges. First, it is based on transepithelial electrical resistance (TER) and restriction to ruthenium red permeation only, which today are known to be just two of the many characteristics of TJs; and second some attributes of the TJs (e.g. the presence of specific molecules) have been found even in cells that do not establish these structures. This raised the question of whether heterotypic TJs were not true or full TJs. In the present work we demonstrate that heterotypic TJs in mixed monolayers of MDCK cells with a different cell type (LLC-PK1) are true TJs through several criteria, such as TER, the ability to stop the membrane diffusion of fluorescent sphingomyelin from the apical to the lateral domain, the presence of ZO-1, ZO-2, occludin, claudin-1 and claudin-2. We then turn to the presence of E-cadherin at heterotypic borders, and observe that it cannot be detected by the highly specific DECMA-1 antibody, in spite of the fact that this antibody does reveal the presence of E-cadherin at homotypic contacts of the same cell. Yet, ECCD-2, an antibody against another domain of E-cadherin, reveals that this molecule may be present at both types of borders. Thus, E-cadherin is present at heterotypic borders, yet it seems to be in a conformation unable to bind DECMA-1. Our results suggest: (1) that heterotypic borders can establish fully developed TJs; (2) that the sealing of these heterotypic TJs depends on E-cadherin; (3) but that this dependence is mediated through a cascade of chemical reactions involving two different G-proteins, PLC, PKC and calmodulin, which we have characterized elsewhere (Balda et al. 1991, J Membr Biol 122:193); and (4) hence molecules of E-cadherin that trigger junction formation can act from a distant homotypic contact.