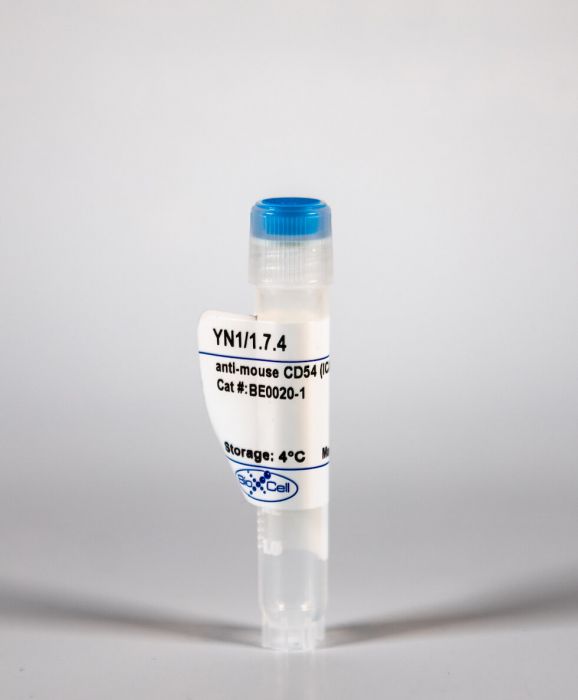 The YN1/1.7.4 monoclonal antibody reacts with mouse CD54 also known as Intercellular Adhesion Molecule-1 (ICAM-1). CD54 is a 90 kDa single-chain transmembrane glycoprotein and a member of the Ig superfamily. CD54 is typically expressed on non-hematopoietic cells such as endothelial cells, thymic epithelial cells, and fibroblasts but can also be expressed on macrophages, T-lymphoblasts, germinal center B cells and dendritic cells. CD54 is a ligand for LFA-1, a receptor found on leukocytes. When activated, leukocytes bind to endothelial cells via CD54/LFA-1 to facilitate transmigration into tissues. Pro-inflammatory cytokines such as IL-1, TNF and IFNγ induce CD54 expression on endothelial cells and fibroblasts. The YN1/1.7.4 antibody has been shown to neutralize CD54 in vivo and inhibit CXCL1, IFNγ, and IL-17 production and neutrophil infiltration into inflammatory lesions.

Advances in cell-fate mapping have revealed the complexity in phenotype, ontogeny and tissue distribution of the mammalian myeloid system. To capture this phenotypic diversity, we developed a 38-antibody panel for mass cytometry and used dimensionality reduction with machine learning-aided cluster analysis to build a composite of murine (mouse) myeloid cells in the steady state across lymphoid and nonlymphoid tissues. In addition to identifying all previously described myeloid populations, higher-order analysis allowed objective delineation of otherwise ambiguous subsets, including monocyte-macrophage intermediates and an array of granulocyte variants. Using mice that cannot sense granulocyte macrophage-colony stimulating factor GM-CSF (Csf2rb(-/-)), which have discrete alterations in myeloid development, we confirmed differences in barrier tissue dendritic cells, lung macrophages and eosinophils. The methodology further identified variations in the monocyte and innate lymphoid cell compartment that were unexpected, which confirmed that this approach is a powerful tool for unambiguous and unbiased characterization of the myeloid system.

Contact hypersensitivity is a CD8 T cell-mediated response to hapten sensitization and challenge of the skin. Effector CD8 T cell recruitment into the skin parenchyma to elicit the response to hapten challenge requires prior CXCL1/KC-directed neutrophil infiltration within 3-6 h after challenge and is dependent on IFN-gamma and IL-17 produced by the hapten-primed CD8 T cells. Mechanisms directing hapten-primed CD8 T cell localization and activation in the Ag challenge site to induce this early CXCL1 production in response to 2,4-dinitrofluorobenzene were investigated. Both TNF-alpha and IL-17, but not IFN-gamma, mRNA was detectable within 1 h of hapten challenge of sensitized mice and increased thereafter. Expression of ICAM-1 was observed by 1 h after challenge of sensitized and nonsensitized mice and was dependent on TNF-alpha. The induction of IL-17, IFN-gamma, and CXCL1 in the challenge site was not observed when ICAM-1 was absent or neutralized by specific Ab. During the elicitation of the contact hypersensitivity response, endothelial cells expressed ICAM-1 and produced CXCL1 suggesting this as the site of CD8 T cell localization and activation. Endothelial cells isolated from challenged skin of naive and sensitized mice had acquired the hapten and the ability to activate hapten-primed CD8 T cell cytokine production. These results indicate that hapten application to the skin of sensitized animals initiates an inflammatory response promoting hapten-primed CD8 T cell localization to the challenge site through TNF-alpha-induced ICAM-1 expression and CD8 T cell activation to produce IFN-gamma and IL-17 through endothelial cell presentation of hapten.

Mice deficient in intercellular adhesion molecule-1 (ICAM-1), lacking membranous ICAM-1, show a normal development but abnormalities of inflammatory and immune functions. Although the membrane-bound form of ICAM-1 is not detectable in the mutant strain, circulating ICAM-1 (cICAM) is present in serum from ICAM-1-deficient mice in similar amounts as in serum from wild-type mice. These findings were confirmed in vitro by flow cytometric analysis of lipopolysaccharide-stimulated spleen cells, and cICAM-enzyme-linked immunosorbent assay analysis of supernatants of cultured spleen cells. To analyze for the source of cICAM-1, spleen cell RNA was isolated and ICAM-1 RNA was amplified by reverse transcriptase-polymerase chain reaction using primers binding in the 5′ and 3′ untranslated regions. Different fragments were cloned and sequenced. In wild-type RNA the common 5 domain form of ICAM-1 was identified. In RNA from ICAM-1 mutant mice only 3 smaller fragments were found. Sequencing these fragments identified 3 alternatively spliced isoforms of ICAM-1, lacking 2 or 3 extracellular domains. However, in all spliced fragments the transmembrane domain was included. Therefore, we postulate that circulating forms of ICAM-1 are generated by proteolytic cleavage of membranous ICAM-1. The data indicate that the expression of membranous ICAM-1 and the appearance of circulating forms in serum are independently regulated mechanisms.

Effects of ICAM-1 antisense oligonucleotide on the renal tubulointerstitium in mice with unilateral ureteral obstruction. BACKGROUND: To extend our previous study of the therapy of the renal lesions of unilateral ureteral obstruction (UUO) in mice by an inhibitor of intercellular adhesion molecule-1 (ICAM-1), we investigated the blocking effects of ICAM-1 antisense oligonucleotides (ASONs) on the ICAM-1 expression in mouse kidney. METHODS: First, ICAM-1 ASON was transducted into mouse renal tubular epithelial cells to investigate the effects of ICAM-1 ASON in vitro. Second, fluorescein isothiocyanate (FITC)-labeled ICAM-1 ASON was injected intravenously to determine the distribution of the ASON in vivo. Third, the expression of ICAM-1 in kidney and the changes of renal morphology were observed to investigate the therapeutic effects of ICAM-1 ASON on the UUO mice in vivo. RESULTS: The expressions of ICAM-1 in the epithelial cells induced by interleukin-1beta were inhibited by ICAM-1 ASON at the dosages of 100 and 200 nmol/L. Twenty-four hours after an introvenous injection with FITC-labeled ICAM-1 ASON, the highest level of fluorescein was detected within the proximal tubules in mouse kidney. Results of immunohistology and Northern blot showed that the ICAM-1 expression was markedly reduced in the obstructed kidney after treatment with ICAM-1 ASON. The ASON also alleviated the infiltration of inflammatory cells and accumulation of the extracellular matrix in the tubulointerstitium of UUO mice without apparent side effects. CONCLUSION: Our data demonstrate that ICAM-1 ASON is taken up primarily by the proximal tubular cells of mouse kidney. ICAM-1 ASON can selectively inhibit the ICAM-1 expression of the renal tubular cells both in vitro and in vivo.