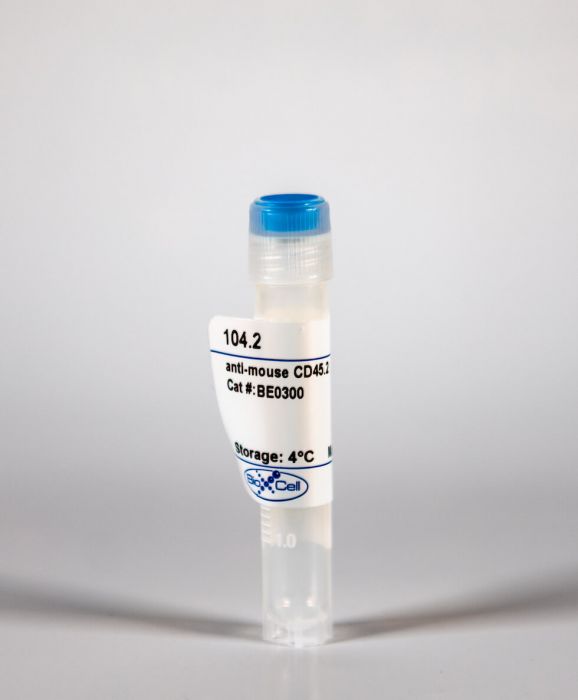 The 104.2 monoclonal antibody reacts with mouse CD45.2 a 180-240 kDa member of the protein tyrosine phosphatase family. CD45.2 is an alloantigen of CD45 and is only expressed by certain mouse strains including C57BL/6, CBA, 129, A, AKR, C58, DBA/1, DBA/2, BALB/c, and C3H/He. The 104.2 monoclonal antibody does not react with leukocytes of CD45.1-expressing mouse strains including DA, SJL/J, RIII, and STS/A. CD45.2 is expressed on all hematopoietic cells except mature erythrocytes and platelets and is thought to be involved in TCR and BCR signal transduction. The 104.2 antibody has been shown to block B cell responses in vitro and reduce serum autoantibody concentration in vivo in SLE-prone mice.

During chronic infection, pathogen-specific CD8(+) T cells upregulate expression of molecules such as the inhibitory surface receptor PD-1, have diminished cytokine production and are thought to undergo terminal differentiation into exhausted cells. Here we found that T cells with memory-like properties were generated during chronic infection. After transfer into naive mice, these cells robustly proliferated and controlled a viral infection. The reexpanded T cell populations continued to have the exhausted phenotype they acquired during the chronic infection. Thus, the cells underwent a form of differentiation that was stably transmitted to daughter cells. We therefore propose that during persistent infection, effector T cells stably differentiate into a state that is optimized to limit viral replication without causing overwhelming immunological pathology.

One of the hallmarks of immunological abnormalities in mice that are prone to syndromes resembling systemic lupus erythematosus is polyclonal activation of B cells and a switch of serum immunoglobulins or autoantibodies from IgM to IgG that coincides with onset of autoimmune disease. Therefore, we investigated whether the development of autoimmunity can be alleviated in such mice by administration of monoclonal alloantibody directed against Ly-5, because this was known to reduce levels of polyclonal IgG antibody without affecting other immunoglobulin isotypes. Our results indicate that at least some forms of autoimmune disease may be effectively treated by thus reducing the concentration of IgG autoantibody in this manner.

We have identified two important molecules involved in the regulation of B cell differentiation, namely Lyb-2 and Ly-5. To gain further insight into the function of these two molecules, we examined the effect of monoclonal Lyb-2 and Ly-5 antibodies on lipopolysaccharide (LPS)-induced B cell growth and maturation. We found that Lyb-2 antibody does not have any effect on LPS-induced proliferation and on polyclonal IgM or total IgG responses. On the other hand, although Ly-5 antibody did not affect proliferation and polyclonal IgM responses, it strongly inhibited polyclonal IgG responses, presumably by direct action on B cells. This inhibition was not caused by direct suppressive effect of Ly-5 antibody or Fc receptor-mediated negative signaling. To exert maximal inhibitory effect, Ly-5 antibody had to be added to the culture during the initial 48 hr. However, the presence of Ly-5 antibody during the first 2 days did not cause a significant inhibition. It is thus likely that Ly-5 plays a critical role in the regulation of LPS-induced B cell maturation into IgG-secreting cells at a phase starting within 48 hr after LPS stimulation and continuing thereafter.

Generation of anti-sheep erythrocyte plaque-forming cells (PFC) is greatly reduced in the presence of monoclonal Ly-5 alloantibody. Although Ly-5 is expressed in one of its molecular forms on T cells and macrophages (M phi ) involved in this response, the only demonstrated action of Ly-5 antibody was on B cells. Evidence from elimination of Lyt-2+ cells, and from the responses of serial proportions of Ly-5.1 and Ly-5.2 cells and of Ly-5 heterozygous cells, signifies that PFC reduction cannot be ascribed to any known mechanism of suppression or to a direct suppressive action of Ly-5 antibody on B cells. A critical distinction of Ly-5 from Lyb-2 is that Ly-5 antibody reduces PFC generation to trinitrophenylated Ficoll, a thymus-independent type 2 antigen requiring T cells and M phi for maximal PFC generation in vitro. A second distinction is that PFC reduction by Ly-5 antibody is strictly tied to the time of operation of M phi factor, whereas PFC reduction by Lyb-2 antibody relates to the time of B cell triggering by antigen. Accordingly, M phi factor competitively and quantitatively inhibits the action of Ly-5 antibody in reducing PFC generation. It is likely that the Ly-5 system is concerned in the reception or handling of M phi message by B cells.