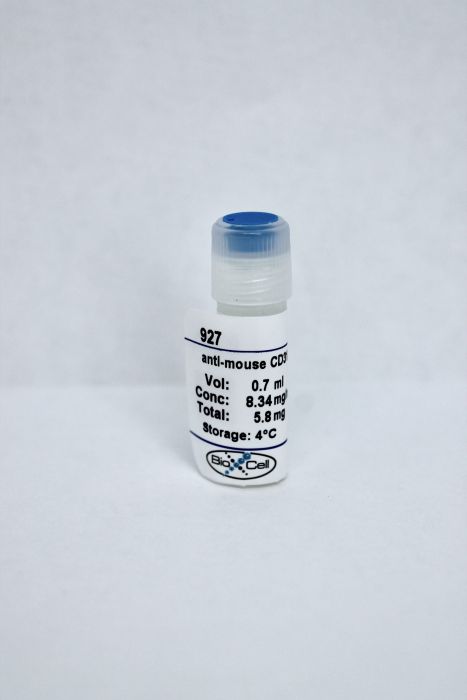 The 927 monoclonal antibody reacts with mouse CD317 also known as BST2 and PDCA-1, a 29-33 kDa type II transmembrane glycoprotein. CD317 is expressed exclusively by plasmacytoid dendritic cells and serves as a marker for these cells. CD317 is also sometimes expressed by some tumor cells, including multiple myeloma, renal cell carcinoma, and melanoma cells. The 927 antibody is a useful tool to specifically deplete plasmacytoid dendritic cells when administered in vivo.

Dendritic cells (DC) are well-known modulators of immunity. This heterogeneous population is composed of defined subsets that exhibit functional specialization and are critical in initiating responses to pathogens. As such, many infectious agents employ strategies to disrupt DC functioning in attempts to evade the immune system. In some instances, this manifests as an outright loss of these cells. Previous work has suggested that, in the absence of an efficient natural killer (NK) cell response, murine cytomegalovirus (MCMV) induces large amounts of interferon (IFN)-I. This heightened IFN-I response is thought to contribute to conventional DC (cDC) loss and delayed development of T cell immunity. However, the precise role of IFN-I in such cDC loss remains unclear. We investigated the effects of licensed NK cells and IFN-I signaling on splenic cDC subsets during MCMV infection and found that a licensed NK cell response partially protects cDC numbers, but does not prevent increases in serum IFN-I. This suggested that high residual IFN-I could contribute to cDC loss. Therefore, we used multiple strategies to modulate IFN-I signaling during MCMV infection including plasmacytoid DC depletion, IFN-I receptor (IFNAR) blockade, and genetic ablation of IFNAR expression. Interestingly, restriction of IFN-I signals did not substantially preserve either CD8(+) or CD4(+) DC total numbers, but resulted in significant retention and/or accumulation of the splenic CD8(-) CD4(-) [double negative (DN)] subset. However, the DN DC effect manifested in a DC-extrinsic manner since IFNAR-deficient cells were not preferentially retained over their IFNAR wild-type counterparts in a mixed-chimera setting. Our results show that IFN-I signaling is not responsible for overt cDC toxicity in the setting of acute MCMV infection and emphasize that additional mechanisms contribute to DC loss and require exploration.

Dendritic cells (DCs) bear the main responsibility for initiation of adaptive immune responses necessary for antimicrobial immunity. In the small intestine, afferent lymphatics convey Ags and microbial signals to mesenteric lymph nodes (LNs) to induce adaptive immune responses against microbes and food Ags derived from the small intestine. Whether the large intestine is covered by the same lymphatic system or represents its own lymphoid compartment has not been studied until very recently. We identified three small mesenteric LNs, distinct from small intestinal LNs, which drain lymph specifically from the colon, and studied DC responses to the attaching and effacing pathogen Citrobacter rodentium in these. Transcriptional profiling of conventional (CD11c(high)CD103(high)) DC and plasmacytoid (plasmacytoid DC Ag-1(high)B220(+)CD11c(int)) DC (pDC) populations during steady-state conditions revealed activity of distinct sets of genes in these two DC subsets, both in small intestinal and colon-draining LNs. C. rodentium activated DC especially in colon-draining LNs, and gene expression changed in pDC more profoundly than in conventional DC. Among the genes most upregulated in pDC were C-type lectin receptor CLEC4E, IL-1Rs (IL-1R1 and -2), proinflammatory cytokines (IL-1a and IL-6), and TLR6. Our results indicate that colon immune surveillance is distinct from that of the small intestine in terms of draining LNs, and identify pDC as active sentinels of colonic inflammation and/or microbial dysbiosis.

The discovery of accessible markers of lymphoma may facilitate the development of antibody-based therapeutic strategies. Here, we describe the results of a chemical proteomic study, based on the in vivo biotinylation of vascular proteins in lymphoma-bearing mice followed by mass spectrometric and bioinformatic analysis, to discover proteins expressed at the tissue-blood border of disseminated B-cell lymphoma. From a list of 58 proteins, which were more than 10-fold up-regulated in nodal and extranodal lymphoma lesions compared with their levels in the corresponding normal host organs, we validated BST-2 as a novel vascular marker of B-cell lymphoma, using immunochemical techniques and in vivo biodistribution studies. Furthermore, targeting BST-2 with 2 independent monoclonal antibodies delayed lymphoma growth in a syngeneic mouse model of the disease. The results of this study delineate a strategy for the treatment of systemic B-cell lymphoma in humans and suggest that anti-BST-2 antibodies may facilitate pharmacodelivery approaches that target the tumor-stroma interface.

There is a high demand for the development of adjuvants that induce cytotoxic T lymphocytes, which are crucial for the elimination of intracellular pathogens and tumor cells. Toll-like receptor (TLR) agonists are prime candidates to fulfill this role because they induce innate immune activation and promote adaptive immune responses. The successful application of the TLR7 agonist R837 for treatment of basal cell carcinoma shows the potential for exploiting this pathway in tumor immunotherapy. Imidazoquinolines like R837 and stimulatory ssRNA oligonucleotides both trigger TLR7-mediated immune activation, but little is known about their comparative ability to promote immunity induction. We investigated differences in innate immune activation and adjuvant activity between the imidazoquinoline R848 and the ssRNA TLR7 agonist polyUs21. In contrast to R848, polyUs21 induced detectable levels of intracellular interferon-alpha (IFN-alpha) in plasmacytoid dendritic cells (PDCs). In immunization studies, only polyUs21 led to robust priming of type 1 T helper cells and cytotoxic T lymphocytes, and it was more efficient in inducing antitumor immunity than R848. Notably, exogenous IFN-alpha augmented the adjuvant activity of R848, whereas depletion of PDC abrogated the adjuvanticity of polyUs21. This study, therefore, identifies sufficient IFN-alpha production by PDC as an important determinant of vaccine efficacy.

Type I IFN-producing cells (IPC) are sentinels of viral infections. Identification and functional characterization of these cells have been difficult because of their small numbers in blood and tissues and their complex cell surface phenotype. To overcome this problem in mice, mAbs recognizing IPC-specific cell surface molecules have been generated. In this study, we report the identification of new Abs specific for mouse IPC, which recognize the bone marrow stromal cell Ag 2 (BST2). Interestingly, previously reported IPC-specific Abs 120G8 and plasmacytoid dendritic cell Ag-1 also recognize BST2. BST2 is predominantly specific for mouse IPC in naive mice, but is up-regulated on most cell types following stimulation with type I IFNs and IFN-gamma. The activation-induced promiscuous expression of BST2 described in this study has important implications for the use of anti-BST2 Abs in identification and depletion of IPC. Finally, we show that BST2 resides within an intracellular compartment corresponding to the Golgi apparatus, and may be involved in trafficking secreted cytokines in IPC.