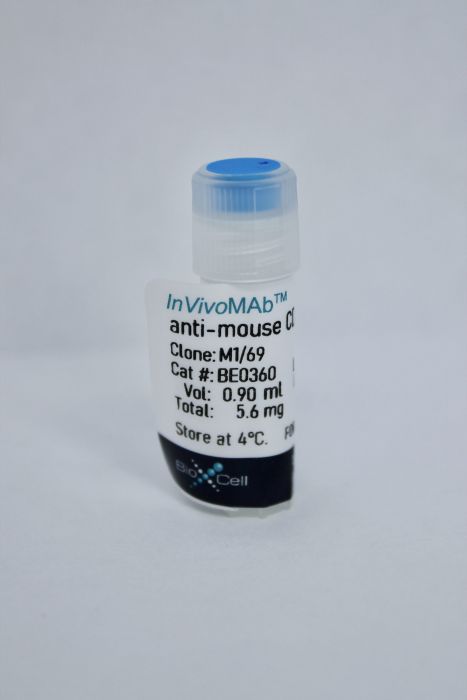 The M1/69 monoclonal antibody reacts with mouse CD24 also known as heat stable antigen (HSA), a 35-50 kDa glycosylated membrane protein. CD24 is expressed by erythrocytes, granulocytes, monocytes, lymphocytes, and dendritic cells. Immature B cells in bone marrow and spleen of adult mice express high levels of CD24, while mature peripheral B cells express intermediate levels of CD24. The expression of CD24 has been used to resolve stages of B cell lymphopoiesis in mouse bone marrow. It has been reported that P-selectin (CD62P) binds to CD24. CD24 is often overexpressed in human tumors. In cancer, CD24 is a regulator of cell migration, invasion, and proliferation.

BACKGROUND: Healthy individuals rarely have problems with wound healing. Most skin lesions heal rapidly and efficiently within one to two weeks. However, many medical and surgical complications can be attributed to deficiencies in wound repair. Open wounds have lost the barrier that protects tissues from bacterial invasion and allows the escape of vital fluids. Without expeditious healing, infections become more frequent. The CD24 gene encodes a heavily-glycosylated cell surface protein anchored to the membrane by phosphatidylinositol. CD24 plays an important role in the adaptive immune response and controls an important genetic checkpoint for homeostasis and autoimmune diseases in both mice and humans. We have previously shown that overexpression of CD24 results in increased proliferation and migration rates. AIM: To examine the role of CD24 in the wound healing process. METHODS: An excisional model of wound healing was used and delayed wound healing was studied in genetically modified heat stable antigen (HSA/CD24)-deficient mice (HSA-/-) compared to wild-type (WT) mice. RESULTS: Large full-thickness skin wounds, excised on the back of mice, exhibited a significant delay in the formation of granulation tissue, and in wound closure when compared to their WTHSA+/+ littermates. Wounds were histologically analyzed and scored, based on the degree of cellular invasion, granulation tissue formation, vascularity, and re-epithelialization. Additionally, in stitched wounds, the HSA-/- mice failed to maintain their stitches; they did not hold and fell already 24 hours, revealing erythematous wound fields. Re-expression of HSA, delivered by lentivirus, restored the normal healing phenotype, within 24 hours post-injury, and even improved the healing in WT, and in BalbC mice. CONCLUSIONS: Delayed wound-healing in the absence of HSA/CD24 suggests that CD24 plays an important role in this process. Increased expression of CD24, even in the normal state, may be used to enhance wound repair.

Erythropoiesis is an important response to certain types of stress, including hypoxia, hemorrhage, bone marrow suppression, and anemia, that result in inadequate tissue oxygenation. This stress-induced erythropoiesis is distinct from basal red blood cell generation; however, neither the cellular nor the molecular factors that regulate this process are fully understood. Here, we report that type 1 conventional dendritic cells (cDC1s), which are defined by expression of CD8alpha in the mouse and XCR1 and CLEC9 in humans, are critical for induction of erythropoiesis in response to stress. Specifically, using murine models, we determined that engagement of a stress sensor, CD24, on cDC1s upregulates expression of the Kit ligand stem cell factor on these cells. The increased expression of stem cell factor resulted in Kit-mediated proliferative expansion of early erythroid progenitors and, ultimately, transient reticulocytosis in the circulation. Moreover, this stress response was triggered in part by alarmin recognition and was blunted in CD24 sensor- and CD8alpha+ DC-deficient animals. The contribution of the cDC1 subset to the initiation of stress erythropoiesis was distinct from the well-recognized role of macrophages in supporting late erythroid maturation. Together, these findings offer insight into the mechanism of stress erythropoiesis and into disorders of erythrocyte generation associated with stress.

Hashimoto thyroiditis can be partially reproduced in mice by immunization with thyroglobulin or, more recently, thyroperoxidase. This experimental autoimmune thyroiditis (EAT) model has been extensively characterized during early disease phases (up to d 35 after immunization). By extending the analysis of EAT to 100 d after immunization, we noted a remarkable regenerative capacity of the thyroid and the expression of Oct-4, suggesting in vivo the existence of adult thyroid stem cells. After an almost complete destruction of the follicular architecture, occurring between d 21 and 28, the thyroid was capable of restoring its follicles and reducing the mononuclear infiltration, so that by d 100 after immunization, it regained its normal morphology and function. During this regeneration process, thyrocytes expressed high levels of CD24. We therefore assessed the role of CD24 in thyroid regeneration by inducing EAT in mice lacking CD24. Regeneration was faster in the absence of CD24, likely a consequence of the effect of CD24 on the infiltrating lymphocytes. The study suggests that the EAT model can also be used as a tool to investigate adult thyroid stem cells.

CD24 is a cell surface glycoprotein that is expressed on both immune cells and cells of the CNS. We have previously shown that CD24 is required for the induction of experimental autoimmune encephalomyelitis (EAE), an experimental model for the human disease multiple sclerosis (MS). The development of EAE requires CD24 expression on both T cells and non-T host cells in the CNS. To understand the role of CD24 on the resident cells in the CNS during EAE development, we created CD24 bone marrow chimeras and transgenic mice in which CD24 expression was under the control of a glial fibrillary acidic protein promotor (AstroCD24TG mice). We showed that mice lacking CD24 expression on the CNS resident cells developed a mild form of EAE; in contrast, mice with overexpression of CD24 in the CNS developed severe EAE. Compared with nontransgenic mice, the CNS of AstroCD24TG mice had higher expression of cytokine genes such as IL-17 and demyelination-associated marker P8; the CNS of AstroCD24TG mice accumulated higher numbers of Th17 and total CD4+ T cells, whereas CD4+ T cells underwent more proliferation during EAE development. Expression of CD24 in CD24-deficient astrocytes also enhanced their costimulatory activity to myelin oligodendrocyte glycoprotein-specific, TCR-transgenic 2D2 T cells. Thus, CD24 on the resident cells in the CNS enhances EAE development via costimulation of encephalitogenic T cells. Because CD24 is increased drastically on resident cells in the CNS during EAE, our data have important implications for CD24-targeted therapy of MS.

Follicular dendritic cell networks are said to be pivotal to both the formation of germinal centers (GCs) and their functions in generating antigen-specific antibody affinity maturation and B cell memory. We report that lymphotoxin beta-deficient mice form GC cell clusters in the gross anatomical location expected of GCs, despite the complete absence of follicular dendritic cell networks. Furthermore, antigen-specific GC generation was at first relatively normal, but these GCs then rapidly regressed and GC-phase antibody affinity maturation was reduced. Lymphotoxin beta-deficient mice also showed substantial B cell memory in their mesenteric lymph nodes. This memory antibody response was of relatively low affinity for antigen at week 4 after challenge, but by week 10 after challenge was comparable to wild-type, indicating that affinity maturation had failed in the GC phase but developed later.