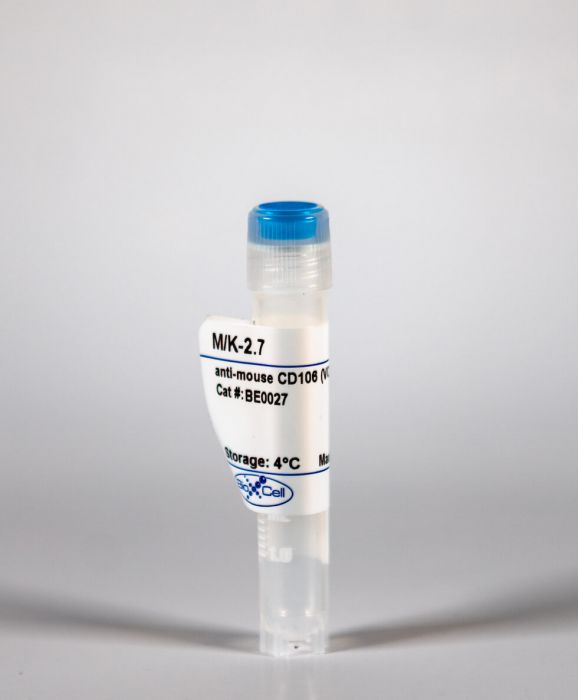 The M/K-2.7 monoclonal antibody reacts with CD106 also known as VCAM-1 and INCAM-110. CD106 is a 110 kDa single chain type I glycoprotein that is expressed primarily on activated vascular endothelial cells but has also been reported on follicular and interfollicular dendritic cells, some macrophages, bone marrow stromal cells, and non-vascular cell populations within joints, kidney, muscle, heart, placenta, and brain. CD106 expression is induced by inflammatory stimuli and cytokines. CD106 binds the integrins CD49d/CD29 (VLA-4) and α4β7 which contribute to leukocyte adhesion, transmigration, and co-stimulation of T cell proliferation.

An aged circulatory environment can activate microglia, reduce neural precursor cell activity and impair cognition in mice. We hypothesized that brain endothelial cells (BECs) mediate at least some of these effects. We observe that BECs in the aged mouse hippocampus express an inflammatory transcriptional profile with focal upregulation of vascular cell adhesion molecule 1 (VCAM1), a protein that facilitates vascular-immune cell interactions. Concomitantly, levels of the shed, soluble form of VCAM1 are prominently increased in the plasma of aged humans and mice, and their plasma is sufficient to increase VCAM1 expression in cultured BECs and the hippocampi of young mice. Systemic administration of anti-VCAM1 antibody or genetic ablation of Vcam1 in BECs counteracts the detrimental effects of plasma from aged individuals on young brains and reverses aging aspects, including microglial reactivity and cognitive deficits, in the brains of aged mice. Together, these findings establish brain endothelial VCAM1 at the blood-brain barrier as a possible target to treat age-related neurodegeneration.

BACKGROUND: The incidence of acute cardiovascular complications is highly time-of-day dependent. However, the mechanisms driving rhythmicity of ischemic vascular events are unknown. Although enhanced numbers of leukocytes have been linked to an increased risk of cardiovascular complications, the role that rhythmic leukocyte adhesion plays in different vascular beds has not been studied. METHODS: We evaluated leukocyte recruitment in vivo by using real-time multichannel fluorescence intravital microscopy of a tumor necrosis factor-α-induced acute inflammation model in both murine arterial and venous macrovasculature and microvasculature. These approaches were complemented with genetic, surgical, and pharmacological ablation of sympathetic nerves or adrenergic receptors to assess their relevance for rhythmic leukocyte adhesion. In addition, we genetically targeted the key circadian clock gene Bmal1 (also known as Arntl) in a lineage-specific manner to dissect the importance of oscillations in leukocytes and components of the vessel wall in this process. RESULTS: In vivo quantitative imaging analyses of acute inflammation revealed a 24-hour rhythm in leukocyte recruitment to arteries and veins of the mouse macrovasculature and microvasculature. Unexpectedly, although in arteries leukocyte adhesion was highest in the morning, it peaked at night in veins. This phase shift was governed by a rhythmic microenvironment and a vessel type-specific oscillatory pattern in the expression of promigratory molecules. Differences in cell adhesion molecules and leukocyte adhesion were ablated when disrupting sympathetic nerves, demonstrating their critical role in this process and the importance of β(2)-adrenergic receptor signaling. Loss of the core clock gene Bmal1 in leukocytes, endothelial cells, or arterial mural cells affected the oscillations in a vessel type-specific manner. Rhythmicity in the intravascular reactivity of adherent leukocytes resulted in increased interactions with platelets in the morning in arteries and in veins at night with a higher predisposition to acute thrombosis at different times as a consequence. CONCLUSIONS: Together, our findings point to an important and previously unrecognized role of artery-associated sympathetic innervation in governing rhythmicity in vascular inflammation in both arteries and veins and its potential implications in the occurrence of time-of-day-dependent vessel type-specific thrombotic events.

The number of leukocytes present in circulation varies throughout the day, reflecting bone marrow output and emigration from blood into tissues. Using an organism-wide circadian screening approach, we detected oscillations in pro-migratory factors that were distinct for specific vascular beds and individual leukocyte subsets. This rhythmic molecular signature governed time-of-day-dependent homing behavior of leukocyte subsets to specific organs. Ablation of BMAL1, a transcription factor central to circadian clock function, in endothelial cells or leukocyte subsets demonstrated that rhythmic recruitment is dependent on both microenvironmental and cell-autonomous oscillations. These oscillatory patterns defined leukocyte trafficking in both homeostasis and inflammation and determined detectable tumor burden in blood cancer models. Rhythms in the expression of pro-migratory factors and migration capacities were preserved in human primary leukocytes. The definition of spatial and temporal expression profiles of pro-migratory factors guiding leukocyte migration patterns to organs provides a resource for the further study of the impact of circadian rhythms in immunity.

The hypoxia-inducible transcription factors HIF-1 and HIF-2 mediate key cellular adaptions to hypoxia and contribute to renal homeostasis and pathophysiology; however, little is known about the cell type-specific functions of HIF-1 and HIF-2 in response to ischemic kidney injury. Here, we used a genetic approach to specifically dissect the roles of endothelial HIF-1 and HIF-2 in murine models of hypoxic kidney injury induced by ischemia reperfusion or ureteral obstruction. In both models, inactivation of endothelial HIF increased injury-associated renal inflammation and fibrosis. Specifically, inactivation of endothelial HIF-2alpha, but not endothelial HIF-1alpha, resulted in increased expression of renal injury markers and inflammatory cell infiltration in the postischemic kidney, which was reversed by blockade of vascular cell adhesion molecule-1 (VCAM1) and very late antigen-4 (VLA4) using monoclonal antibodies. In contrast, pharmacologic or genetic activation of HIF via HIF prolyl-hydroxylase inhibition protected wild-type animals from ischemic kidney injury and inflammation; however, these same protective effects were not observed in HIF prolyl-hydroxylase inhibitor-treated animals lacking endothelial HIF-2. Taken together, our data indicate that endothelial HIF-2 protects from hypoxia-induced renal damage and represents a potential therapeutic target for renoprotection and prevention of fibrosis following acute ischemic injury.

A role for macrophages in erythropoiesis was suggested several decades ago when erythroblastic islands in the bone marrow, composed of a central macrophage surrounded by developing erythroblasts, were described. However, the in vivo role of macrophages in erythropoiesis under homeostatic conditions or in disease remains unclear. We found that specific depletion of CD169(+) macrophages markedly reduced the number of erythroblasts in the bone marrow but did not result in overt anemia under homeostatic conditions, probably because of concomitant alterations in red blood cell clearance. However, CD169(+) macrophage depletion significantly impaired erythropoietic recovery from hemolytic anemia, acute blood loss and myeloablation. Furthermore, macrophage depletion normalized the erythroid compartment in a JAK2(V617F)-driven mouse model of polycythemia vera, suggesting that erythropoiesis in polycythemia vera remains under the control of macrophages in the bone marrow and splenic microenvironments. These results indicate that CD169(+) macrophages promote late erythroid maturation and that modulation of the macrophage compartment may be a new strategy to treat erythropoietic disorders.

Peripheral tissue homing receptors enable T cells to access inflamed nonlymphoid tissues. In this study, we show that two such molecules, E-selectin ligand and alpha4beta1 integrin, enable activated and memory T cells to enter lymph nodes (LN) as well. This affects the quantitative and qualitative distribution of these cells among regional LN beds. CD8 memory T cells in LN that express these molecules were mostly CD62L(lo) and would normally be classified as effector memory cells. However, similar to central memory cells, they expanded upon Ag re-encounter. This led to differences in the magnitude of the recall response that depended on the route of immunization. These novel cells share properties of both central and effector memory cells and reside in LN based on previously undescribed mechanisms of entry.