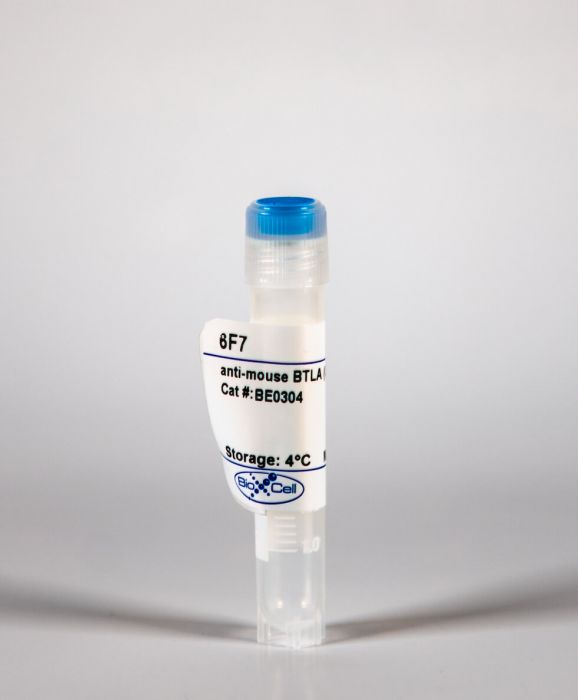 The 6F7 monoclonal antibody reacts with mouse B- and T-lymphocyte attenuator (BTLA) also known as CD272. BTLA is an Ig superfamily member which is expressed on B cells, T cells, macrophages, dendritic cells, NK cells, and NKT cells. Like PD-1 and CTLA-4, BTLA interacts with a B7 homolog, B7-H4. However, unlike PD-1 and CTLA-4, BTLA displays T cell inhibition via interaction with tumor necrosis family receptors, not just the B7 family of cell surface receptors. BTLA is a ligand for herpes virus entry mediator (HVEM). BTLA-HVEM complexes have been shown to negatively regulate T cell immune responses. There are conflicting reports concerning the activity of the 6F7 antibody. In some cases, the antibody is reported to deplete BTLA+ B and CD4 T cells while in others the antibody is reported as having agonistic activity. See the references for details.

It was recently reported that inhibitory molecules such as programmed death-1 (PD-1) were upregulated on CD8(+) T cells during acute Friend retrovirus infection and that the cells were prematurely exhausted and dysfunctional in vitro. The current study confirms that most activated CD8(+) T cells upregulated expression of PD-1 during acute infection and revealed a dichotomy of function between PD-1(hi) and PD-1(lo) subsets. More PD-1(lo) cells produced antiviral cytokines such as IFN-gamma and TNF-alpha, whereas more PD-1(hi) cells displayed characteristics of cytotoxic effectors such as production of granzymes and surface expression of CD107a. Importantly, CD8(+) T cells mediated rapid in vivo cytotoxicity and were critical for control of acute Friend virus replication. Thus, direct ex vivo analyses and in vivo experiments revealed high CD8(+) T cell functionality and indicate that PD-1 expression during acute infection is not a marker of T cell exhaustion.

The novel coinhibitory receptor BTLA may have a regulatory role in maintaining peripheral tolerance; however, its role in autoimmune diabetes is unknown. In this study, we show that anti-BTLA mAb 6F7 selectively depleted pathogenic B and CD4+ T(H) cells; enhanced the proportion of cells with the forkhead box p3+ PD-1+CD4+ regulatory T phenotype; and increased the production of potentially protective (IL-10) and detrimental (IL-2, IFN-gamma) cytokines in NOD mice. As interactions between BTLA and PD-1 coinhibitory pathways have been described in the cardiac allograft model, we also investigated if these pathways may have significant interaction in autoimmune diabetes. Anti-BTLA inhibited anti-PD-1-potentiated total IL-12 (p40+p70) production, suggesting the possibility that anti-BTLA may have a greater effect in the setting of anti-PD-1-triggered diabetes. To test this, NOD mice at 4 and 10 weeks of age were treated with anti-BTLA mAb, anti-PD-1 mAb, both mAb, or isotype control and were monitored for diabetes development. Although anti-BTLA mAb delayed diabetes onset significantly in 10- but not 4-week-old NOD mice, anti-BTLA mAb attenuated anti-PD-1-induced diabetes in both age groups. Hence, strategies targeting BTLA+ lymphocytes or therapies enhancing the BTLA-negative cosignal may prove valuable in treating autoimmune diabetes.

The interaction between the tumor necrosis factor (TNF) family member LIGHT and the TNF family receptor herpes virus entry mediator (HVEM) co-stimulates T cells and promotes inflammation. However, HVEM also triggers inhibitory signals by acting as a ligand that binds to B and T lymphocyte attenuator (BTLA), an immunoglobulin super family member. The contribution of HVEM interacting with these two binding partners in inflammatory processes remains unknown. In this study, we investigated the role of HVEM in the development of colitis induced by the transfer of CD4(+)CD45RB(high) T cells into recombination activating gene (Rag)(-/-) mice. Although the absence of HVEM on the donor T cells led to a slight decrease in pathogenesis, surprisingly, the absence of HVEM in the Rag(-/-) recipients led to the opposite effect, a dramatic acceleration of intestinal inflammation. Furthermore, the critical role of HVEM in preventing colitis acceleration mainly involved HVEM expression by radioresistant cells in the Rag(-/-) recipients interacting with BTLA. Our experiments emphasize the antiinflammatory role of HVEM and the importance of HVEM expression by innate immune cells in preventing runaway inflammation in the intestine.

in vivo BTLA+ B cell and CD4 T cell depletion

Complex interactions between positive and negative cosignaling receptors ultimately determine the fate of the immune response. The recently identified coinhibitory receptor, B and T lymphocyte attenuator (BTLA), contributes to regulation of autoimmune and potentially alloimmune responses. We investigated the role of BTLA in a fully major histocompatibility complex-mismatched mouse islet transplant model. We report that anti-BTLA mAb (6F7) alone does not accelerate graft rejection. Rather, while CTLA4Ig alone improved allograft survival, the addition of anti-BTLA mAb to CTLA4Ig led to indefinite (>100 days) allograft survival. Immediately after treatment with anti-BTLA mAb and CTLA4Ig, islet allografts showed intact islets and insulin production despite a host cellular response, with local accumulation of Foxp3+ cells. We clearly demonstrate that combined therapy with anti-BTLA mAb and CTLA4Ig mice induced donor-specific tolerance, since mice accepted a second donor-specific islet graft without further treatment and rejected third party grafts. CTLA4Ig and anti-BTLA mAb limited the initial in vivo proliferation of CFSE-labeled allogeneic lymphocytes, and anti-BTLA mAb enhanced the proportion of PD-1 expressing T cells while depleting pathogenic BTLA+ lymphocytes. We conclude that targeting the BTLA pathway in conjunction with CTLA4Ig costimulatory blockade may be a useful strategy for promoting immunological tolerance in murine islet allografts.

B and T lymphocyte attenuator (BTLA) was initially identified as expressed on Th1 cells and B cells, but recently reported to be expressed by macrophages, dendritic cells, and NK cells as well. To address this discrepancy we generated a panel of BTLA-specific mAbs and characterized BTLA expression under various activation conditions. We report the existence of three distinct BTLA alleles among 23 murine strains, differing both in Ig domain structure and cellular distribution of expression on lymphoid subsets. The BALB/c and MRL/lpr alleles differ at one amino acid residue, but C57BL/6 has nine additional differences and alters the predicted cysteine bonding pattern. The BALB/c BTLA allele is also expressed by B cells, T cells, and dendritic cells, but not macrophages or NK cells. However, C57BL/6 BTLA is expressed on CD11b+ macrophages and NK cells. Finally, in CD4+ T cells, BTLA is expressed most highly following Ag-specific induction of anergy in vivo, and unlike programmed death-1 and CTLA-4, not expressed by CD25+ regulatory T cells. These results clarify discrepancies regarding BTLA expression, suggest that structural and expression polymorphisms be considered when analyzing BTLA in various murine backgrounds, and indicate a possible role in anergic CD4+ T cells.