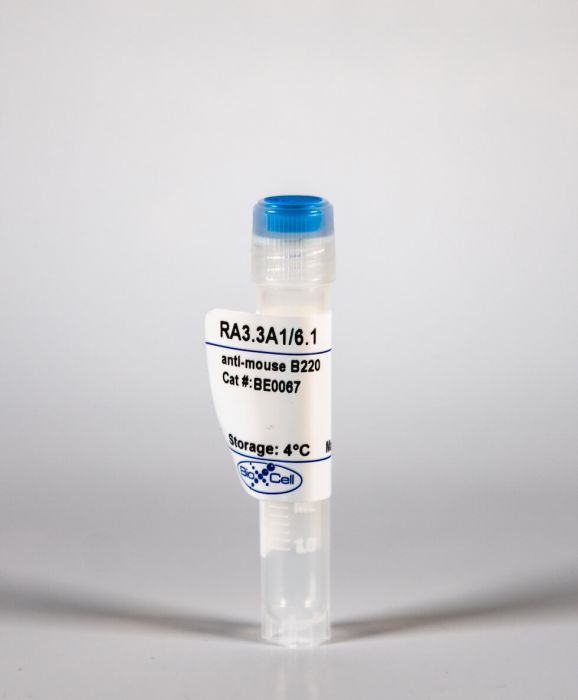 The RA3.3A1/6.1 monoclonal antibody reacts with mouse B220 also known as CD45R. B220 is a 220 kDa transmembrane protein tyrosine phosphatase expressed on B cells and some subsets of T and NK cells. B220 plays a critical role in TCR and BCR signaling and is commonly used as a B cell marker. The RA3.3A1/6.1 antibody is commonly used for in vivo B cell depletion.

in vivo B cell depletion

Whereas cancers grow within host tissues and evade host immunity through immune-editing and immunosuppression, tumours are rarely transmissible between individuals. Much like transplanted allogeneic organs, allogeneic tumours are reliably rejected by host T cells, even when the tumour and host share the same major histocompatibility complex alleles, the most potent determinants of transplant rejection. How such tumour-eradicating immunity is initiated remains unknown, although elucidating this process could provide the basis for inducing similar responses against naturally arising tumours. Here we find that allogeneic tumour rejection is initiated in mice by naturally occurring tumour-binding IgG antibodies, which enable dendritic cells (DCs) to internalize tumour antigens and subsequently activate tumour-reactive T cells. We exploited this mechanism to treat autologous and autochthonous tumours successfully. Either systemic administration of DCs loaded with allogeneic-IgG-coated tumour cells or intratumoral injection of allogeneic IgG in combination with DC stimuli induced potent T-cell-mediated antitumour immune responses, resulting in tumour eradication in mouse models of melanoma, pancreas, lung and breast cancer. Moreover, this strategy led to eradication of distant tumours and metastases, as well as the injected primary tumours. To assess the clinical relevance of these findings, we studied antibodies and cells from patients with lung cancer. T cells from these patients responded vigorously to autologous tumour antigens after culture with allogeneic-IgG-loaded DCs, recapitulating our findings in mice. These results reveal that tumour-binding allogeneic IgG can induce powerful antitumour immunity that can be exploited for cancer immunotherapy.

The production of mature eosinophils (Eos) is a tightly orchestrated process with the aim to sustain normal Eos levels in tissues while also maintaining low numbers of these complex and sensitive cells in the blood. To identify regulators of homeostatic eosinophilopoiesis in mice, we took a global approach to identify genome-wide transcriptome and epigenome changes that occur during homeostasis at critical developmental stages, including Eos-lineage commitment and lineage maturation. Our analyses revealed a markedly greater number of transcriptome alterations associated with Eos maturation (1199 genes) than with Eos-lineage commitment (490 genes), highlighting the greater transcriptional investment necessary for differentiation. Eos-lineage-committed progenitors (EoPs) were noted to express high levels of granule proteins and contain granules with an ultrastructure distinct from that of mature resting Eos. Our analyses also delineated a 976-gene Eos-lineage transcriptome that included a repertoire of 56 transcription factors, many of which have never previously been associated with Eos. EoPs and Eos, but not granulocyte-monocyte progenitors or neutrophils, expressed Helios and Aiolos, members of the Ikaros family of transcription factors, which regulate gene expression via modulation of chromatin structure and DNA accessibility. Epigenetic studies revealed a distinct distribution of active chromatin marks between genes induced with lineage commitment and genes induced with cell maturation during Eos development. In addition, Aiolos and Helios binding sites were significantly enriched in genes expressed by EoPs and Eos with active chromatin, highlighting a potential novel role for Helios and Aiolos in regulating gene expression during Eos development.

Advances in cell-fate mapping have revealed the complexity in phenotype, ontogeny and tissue distribution of the mammalian myeloid system. To capture this phenotypic diversity, we developed a 38-antibody panel for mass cytometry and used dimensionality reduction with machine learning-aided cluster analysis to build a composite of murine (mouse) myeloid cells in the steady state across lymphoid and nonlymphoid tissues. In addition to identifying all previously described myeloid populations, higher-order analysis allowed objective delineation of otherwise ambiguous subsets, including monocyte-macrophage intermediates and an array of granulocyte variants. Using mice that cannot sense granulocyte macrophage-colony stimulating factor GM-CSF (Csf2rb(-/-)), which have discrete alterations in myeloid development, we confirmed differences in barrier tissue dendritic cells, lung macrophages and eosinophils. The methodology further identified variations in the monocyte and innate lymphoid cell compartment that were unexpected, which confirmed that this approach is a powerful tool for unambiguous and unbiased characterization of the myeloid system.

Modification of allogeneic dendritic cells (DCs) through drug treatment results in DCs with in vitro hallmarks of tolerogenicity. Despite these observations, using murine MHC-mismatched skin and heart transplant models, donor-derived drug-modified DCs not only failed to induce tolerance but also accelerated graft rejection. The latter was inhibited by injecting the recipient with anti-CD8 Ab, which removed both CD8(+) T cells and CD8(+) DCs. The discrepancy between in vitro and in vivo data could be explained, partly, by the presentation of drug-modified donor DC MHC alloantigens by recipient APCs and activation of recipient T cells with indirect allospecificity, leading to the induction of alloantibodies. Furthermore, allogeneic MHC molecules expressed by drug-treated DCs were rapidly processed and presented in peptide form by recipient APCs in vivo within hours of DC injection. Using TCR-transgenic T cells, Ag presentation of injected OVA-pulsed DCs was detectable for = 3 d, whereas indirect presentation of MHC alloantigen by recipient APCs led to activation of T cells within 14 h and was partially inhibited by reducing the numbers of CD8(+) DCs in vivo. In support of this observation when mice lacking CD8(+) DCs were pretreated with drug-modified DCs prior to transplantation, skin graft rejection kinetics were similar to those in non-DC-treated controls. Of interest, when the same mice were treated with anti-CD40L blockade plus drug-modified DCs, skin graft survival was prolonged, suggesting endogenous DCs were responsible for T cell priming. Altogether, these findings highlight the risks and limitations of negative vaccination using alloantigen-bearing “tolerogenic” DCs.

In recent years, influenza viruses with pandemic potential have been a major concern worldwide. One unresolved issue is how infection or vaccination with seasonal influenza virus strains influences the ability to mount a protective immune response to novel pandemic strains. In this study, we developed a mouse model of primary and secondary influenza infection by using a widely circulating seasonal H1N1 virus and the pandemic strain of H1N1 that emerged in Mexico in 2009, and we evaluated several key issues. First, using overlapping peptide libraries encompassing the entire translated sequences of 5 major influenza virus proteins, we assessed the specificity of CD4 T cell reactivity toward epitopes conserved among H1N1 viruses or unique to the seasonal or pandemic strain by enzyme-linked immunospot (ELISpot) assays. Our data show that CD4 T cells reactive to both virus-specific and genetically conserved epitopes are elicited, allowing separate tracking of these responses. Populations of cross-reactive CD4 T cells generated from seasonal influenza infection were found to expand earlier after secondary infection with the pandemic H1N1 virus than CD4 T cell populations specific for new epitopes. Coincident with this rapid CD4 T cell response was a potentiated neutralizing-antibody response to the pandemic strain and protection from the pathological effects of infection with the pandemic virus. This protection was not dependent on CD8 T cells. Together, our results indicate that exposure to seasonal vaccines and infection elicits CD4 T cells that promote the ability of the mammalian host to mount a protective immune response to pandemic strains of influenza virus.

in vivo B cell depletion

Pulmonary metastasis of breast cancer requires recruitment and expansion of T-regulatory cells (Treg) that promote escape from host protective immune cells. However, it remains unclear precisely how tumors recruit Tregs to support metastatic growth. Here we report the mechanistic involvement of a unique and previously undescribed subset of regulatory B cells. These cells, designated tumor-evoked Bregs (tBreg), phenotypically resemble activated but poorly proliferative mature B2 cells (CD19(+) CD25(High) CD69(High)) that express constitutively active Stat3 and B7-H1(High) CD81(High) CD86(High) CD62L(Low) IgM(Int). Our studies with the mouse 4T1 model of breast cancer indicate that the primary role of tBregs in lung metastases is to induce TGF-beta-dependent conversion of FoxP3(+) Tregs from resting CD4(+) T cells. In the absence of tBregs, 4T1 tumors cannot metastasize into the lungs efficiently due to poor Treg conversion. Our findings have important clinical implications, as they suggest that tBregs must be controlled to interrupt the initiation of a key cancer-induced immunosuppressive event that is critical to support cancer metastasis.