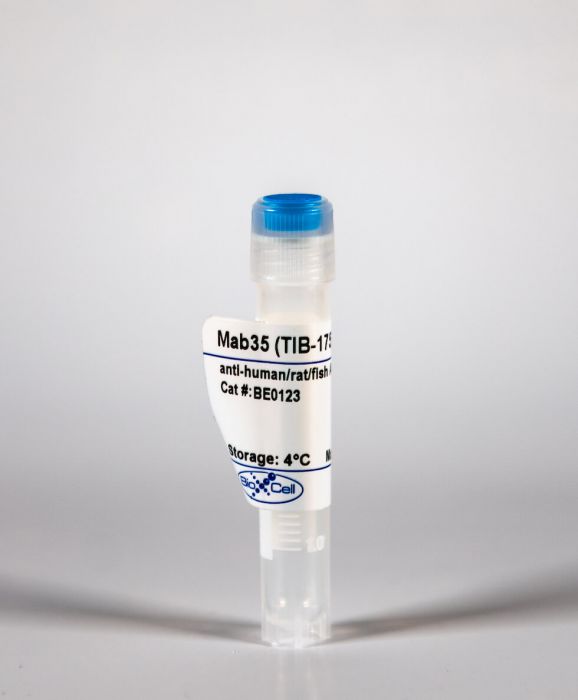 The mAb35 (TIB-175) antibody reacts with human rat and fish acetylcholine receptor (AChR). The AChR is a heterodimeric receptor consisting of four subunits in a molar stoichiometry α2βγδ during the early embryonic stages or after denervation and α2βεδ in the adult form. The mAB35 antibody binds to the major immunogenic region of the α subunits. It has been shown to passively transfer experimental autoimmune myasthenia gravis.

Targeted antibody blocking enables characterization of binding sites on immunoglobulin G (IgG), and can efficiently eliminate harmful antibodies from organisms. In this report, we present a novel peptide-denoted as a dual-functional conjugate of antigenic peptide and Fc-III mimetics (DCAF)-for targeted blocking of antibodies. Synthesis of DCAF was achieved by native chemical ligation, and the molecule consists of three functional parts: a specific antigenic peptide, a linker and the Fc-III mimetic peptide, which has a high affinity toward the Fc region of IgG molecules. We demonstrate that DCAF binds the cognate antibody with high selectivity by simultaneously binding to the Fab and Fc regions of IgG. Animal experiments revealed that DCAF molecules diminish the antibody-dependent enhancement effect in a dengue virus infection model, and rescue the acetylcholine receptor by inhibiting the complement cascade in a myasthenia gravis model. These results suggest that DCAFs could have utility in the development of new therapeutics against harmful antibodies.

Mutations in AChR subunits, expressed as pentamers in neuromuscular junctions (NMJs), cause various types of congenital myasthenic syndromes. In AChR pentamers, the adult epsilon subunit gradually replaces the embryonic gamma subunit as the animal develops. Because of this switch in subunit composition, mutations in specific subunits result in synaptic phenotypes that change with developmental age. However, a mutation in any AChR subunit is considered to affect the NMJs of all muscle fibers equally. Here, we report a zebrafish mutant of the AChR delta subunit that exhibits two distinct NMJ phenotypes specific to two muscle fiber types: slow or fast. Homozygous fish harboring a point mutation in the delta subunit form functional AChRs in slow muscles, whereas receptors in fast muscles are nonfunctional. To test the hypothesis that different subunit compositions in slow and fast muscles underlie distinct phenotypes, we examined the presence of epsilon/gamma subunits in NMJs using specific antibodies. Both wild-type and mutant larvae lacked epsilon/gamma subunits in slow muscle synapses. These findings in zebrafish suggest that some mutations in human congenital myasthenic syndromes may affect slow and fast muscle fibers differently.

Myasthenia gravis (MG) and experimental autoimmune myasthenia gravis (EAMG) are caused by Ab-mediated autoimmune responses to muscle nicotinic acetylcholine receptors (AChRs) that impair neuromuscular transmission, thereby causing muscle weakness. Previously, we discovered that i.p. injection of a therapeutic vaccine consisting of bacterially expressed cytoplasmic domains of human AChR subunits reduced the development of chronic EAMG in rats. In this article, we show that immunization with the therapeutic vaccine in adjuvants does not induce EAMG and, thus, is safe. The potency and efficacy of the therapeutic vaccine were greatly increased by s.c. administration of repeated low doses in IFA. Onset of chronic EAMG could be prevented. Established chronic EAMG could be rapidly reversed, modeling therapy of chronic MG. Therapy reduced pathological Abs assayed by immune precipitation of a main immunogenic region chimera. Successfully treated rats exhibited long-term resistance to reinduction of EAMG, suggesting a lasting cure of MG. A long-term effect of therapy was to change the isotype of the pathogenic Ab response from IgG2b, which fixes complement, to IgG1, which does not. Prevention and reversal of chronic EAMG was not caused by the isotype switch, but the isotype switch may contribute to resistance to reinduction of EAMG. Immunization with AChR cytoplasmic domains in adjuvant is promising as a safe, Ag-specific, potent, effective, rapidly acting, and long-lasting therapeutic approach to MG.

Myasthenia gravis (MG) is a debilitating and potentially fatal neuromuscular disease characterized by the generation of autoantibodies reactive with nicotinic acetylcholine receptors (AChR) that cause loss of AChR from the neuromuscular endplate with resultant failure of neuromuscular transmission. A role for complement (C) in the pathology of human MG has been suggested based upon identification of C activation products in plasma and deposited at the endplate in MG. In the rat model, experimental autoimmune MG (EAMG), C depletion or inhibition restricts clinical disease, further implicating C in pathology. The mechanisms by which C activation drives pathology in MG and EAMG are unclear. Here we provide further evidence implicating C and specifically the membrane attack complex (MAC) in the Lewis rat passive EAMG model of MG. Rats deficient in C6, an essential component of the MAC, were resistant to disease induction and endplate destruction was reduced markedly compared to C6-sufficient controls. After reconstitution with C6, disease severity and endplate destruction in the C6-deficient rats was equivalent to that in controls. The data confirm the essential role of the MAC in the destruction of the endplate in EAMG and raise the prospect of specific MAC inhibition as an alternative therapy in MG patients resistant to conventional treatments.

Myasthenia gravis is an autoimmune disease associated with thymic pathologies, including hyperplasia. In this study, we investigated the processes that may lead to thymic overexpression of the triggering Ag, the acetylcholine receptor (AChR). Using microarray technology, we found that IFN-regulated genes are more highly expressed in these pathological thymic tissues compared with age- and sex-matched normal thymus controls. Therefore, we investigated whether proinflammatory cytokines could locally modify AChR expression in myoid and thymic epithelial cells. We found that AChR transcripts are up-regulated by IFN-gamma, and even more so by IFN-gamma and TNF-alpha, as assessed by real-time RT-PCR, with the alpha-AChR subunit being the most sensitive to this regulation. The expression of AChR protein was increased at the cytoplasmic level in thymic epithelial cells and at the membrane in myoid cells. To examine whether IFN-gamma could influence AChR expression in vivo, we analyzed AChR transcripts in IFN-gamma gene knock-out mice, and found a significant decrease in AChR transcript levels in the thymus but not in the muscle, compared with wild-type mice. However, up-regulation of AChR protein expression was found in the muscles of animals with myasthenic symptoms treated with TNF-alpha. Altogether, these results indicate that proinflammatory cytokines influence the expression of AChR in vitro and in vivo. Because proinflammatory cytokine activity is evidenced in the thymus of myasthenia gravis patients, it could influence AChR expression and thereby contribute to the initiation of the autoimmune anti-AChR response.

Myasthenia gravis is usually caused by autoantibodies to the acetylcholine receptor (AChR). The AChR is clustered and anchored in the postsynaptic membrane of the neuromuscular junction (NMJ) by a cytoplasmic protein called rapsyn. We previously showed that resistance to experimental autoimmune myasthenia gravis (EAMG) in aged rats correlates with increased rapsyn concentration at the NMJ. It is possible, therefore, that endogenous rapsyn expression may be an important determinant of AChR loss and neuromuscular transmission failure in the human disease, and that upregulation of rapsyn expression could be used therapeutically. To examine first a potential therapeutic application of rapsyn upregulation, we induced acute EAMG in young rats by passive transfer of AChR antibody, mAb 35, and used in vivo electroporation to over-express rapsyn unilaterally in one tibialis anterior. We looked at the compound muscle action potentials (CMAPs) in the tibialis anterior, at rapsyn and AChR expression by quantitative radioimmunoassay and immunofluorescence, and at the morphology of the NMJs, comparing the electroporated and untreated muscles, as well as the control and EAMG rats. In control rats, transfected muscle fibres had extrasynaptic rapsyn aggregates, as well as slightly increased rapsyn and AChR concentrations at the NMJ. In EAMG rats, despite deposits of the membrane attack complex, the rapsyn-overexpressing muscles showed no decrement in the CMAPs, no loss of AChR, and the majority had normal postsynaptic folds, whereas endplates of untreated muscles showed typical AChR loss and morphological damage. These data suggest not only that increasing rapsyn expression could be a potential treatment for selected muscles of myasthenia gravis patients, but also lend support to the hypothesis that individual differences in innate rapsyn expression could be a factor in determining disease severity.