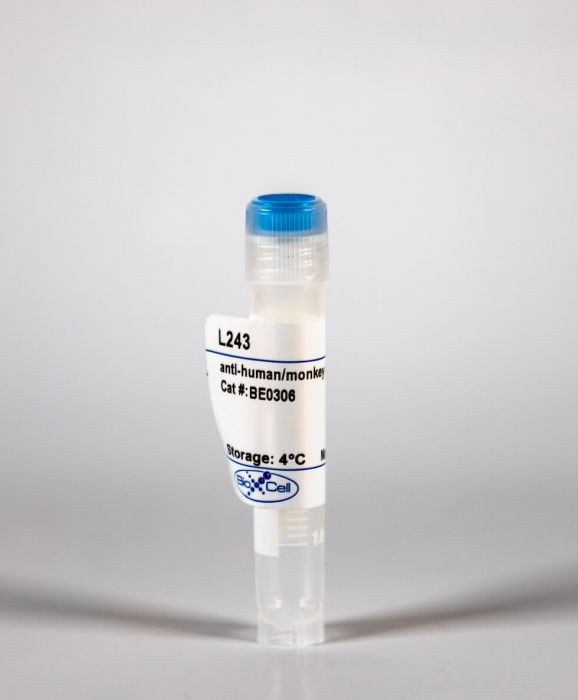 The L243 monoclonal antibody reacts with the human and monkey MHC class II, HLA-DR. HLA-DR is a transmembrane glycoprotein composed of an α chain (36 kDa) and a β chain (27 kDa). HLA-DR is expressed primarily on antigen presenting cells such as B cells, monocytes, macrophages, thymic epithelial cells and activated T cells. HLA-DR is critical for the presentation of peptides to CD4+ T cells.

Stressful conditions in the harsh tumor microenvironment induce autophagy in cancer cells as a mechanism to promote their survival. However, autophagy also causes post-translational modification of proteins that are recognized by the immune system. In particular, modified self-antigens can trigger CD4(+) T-cell responses that might be exploited to boost antitumor immune defenses. In this study, we investigated the ability of CD4 cells to target tumor-specific self-antigens modified by citrullination, which converts arginine residues in proteins to citrulline. Focusing on the intermediate filament protein vimentin, which is frequently citrullinated in cells during epithelial-to-mesenchymal transition of metastasizing epithelial tumors, we generated citrullinated vimentin peptides for immunization experiments in mice. Immunization with these peptides induced IFNgamma- and granzyme B-secreting CD4 T cells in response to autophagic tumor targets. Remarkably, a single immunization with modified peptide, up to 14 days after tumor implant, resulted in long-term survival in 60% to 90% of animals with no associated toxicity. This antitumor response was dependent on CD4 cells and not CD8(+) T cells. These results show how CD4 cells can mediate potent antitumor responses against modified self-epitopes presented on tumor cells, and they illustrate for the first time how the citrullinated peptides may offer especially attractive vaccine targets for cancer therapy.

Clinical illness with Plasmodium falciparum or Plasmodium vivax compromises the function of dendritic cells (DC) and expands regulatory T (Treg) cells. Individuals with asymptomatic parasitemia have clinical immunity, restricting parasite expansion and preventing clinical disease. The role of DC and Treg cells during asymptomatic Plasmodium infection is unclear. During a cross-sectional household survey in Papua, Indonesia, we examined the number and activation of blood plasmacytoid DC (pDC), CD141(+), and CD1c(+) myeloid DC (mDC) subsets and Treg cells using flow cytometry in 168 afebrile children (of whom 15 had P. falciparum and 36 had P. vivax infections) and 162 afebrile adults (of whom 20 had P. falciparum and 20 had P. vivax infections), alongside samples from 16 patients hospitalized with uncomplicated malaria. Unlike DC from malaria patients, DC from children and adults with asymptomatic, microscopy-positive P. vivax or P. falciparum infection increased or retained HLA-DR expression. Treg cells in asymptomatic adults and children exhibited reduced activation, suggesting increased immune responsiveness. The pDC and mDC subsets varied according to clinical immunity (asymptomatic or symptomatic Plasmodium infection) and, in asymptomatic infection, according to host age and parasite species. In conclusion, active control of asymptomatic infection was associated with and likely contingent upon functional DC and reduced Treg cell activation.

Idiosyncratic lapatinib-induced liver injury has been reported to be associated with human leukocyte antigen (HLA)-DRB1*07:01. In order to investigate its mechanism, interaction of lapatinib with HLA-DRB1*07:01 and its ligand peptide derived from tetanus toxoid, has been evaluated in vitro. Here we show that lapatinib enhances binding of the ligand peptide to HLA-DRB1*07:01. Furthermore in silico molecular dynamics analysis revealed that lapatinib could change the beta chain helix in the HLA-DRB1*07:01 specifically to form a tightly closed binding groove structure and modify a large part of the binding groove. These results indicate that lapatinib affects the ligand binding to HLA-DRB1*07:01 and idiosyncratic lapatinib-induced liver injury might be triggered by this mechanism. This is the first report showing that the clinically available drug can enhance the binding of ligand peptide to HLA class II molecules in vitro and in silico.

Polysaccharides of pathogenic extracellular bacteria commonly have negatively charged groups or no charged groups at all. These molecules have been considered classic T cell-independent Ags that do not elicit cell-mediated immune responses in mice. However, bacterial polysaccharides with a zwitterionic charge motif (ZPSs), such as the capsular polysaccharides of many strains of Bacteroides fragilis, Staphylococcus aureus, and Streptococcus pneumoniae type 1 elicit potent CD4(+) T cell responses in vivo and in vitro. The cell-mediated response to ZPS depends on the presence of both positively charged and negatively charged groups on each repeating unit of the polysaccharide. In this study, we define some of the requirements for the presentation of ZPS to CD4(+) T cells. We provide evidence that direct interactions of T cells with APCs are essential for T cell activation by ZPS. Monocytes, dendritic cells, and B cells are all able to serve as APCs for ZPS-mediated T cell activation. APCs lacking MHC class II molecules do not support this activity. Furthermore, mAb to HLA-DR specifically blocks ZPS-mediated T cell activation, while mAbs to other MHC class II and class I molecules do not. Immunoprecipitation of lysates of MHC class II-expressing cells following incubation with ZPS shows binding of ZPS and HLA-DR. Electron microscopy reveals colocalization of ZPS with HLA-DR on the cell surface and in compartments of the endocytic pathway. These results indicate that MHC class II molecules expressing HLA-DR on professional APCs are required for ZPS-induced T cell activation. The implication is that binding of ZPS to HLA-DR may be required for T cell activation.

Human immunodeficiency virus (HIV) infection results in a functional impairment of CD4(+) T cells long before a quantitative decline in circulating CD4(+) T cells is evident. The mechanism(s) responsible for this functional unresponsiveness and eventual depletion of CD4(+) T cells remains unclear. Both direct effects of cytopathic infection of CD4(+) cells and indirect effects in which uninfected “bystander” cells are functionally compromised or killed have been implicated as contributing to the immunopathogenesis of HIV infection. Because T-cell receptor engagement of major histocompatibility complex (MHC) molecules in the absence of costimulation mediated via CD28 binding to CD80 (B7-1) or CD86 (B7-2) can lead to anergy or apoptosis, we determined whether HIV type 1 (HIV-1) virions incorporated MHC class I (MHC-I), MHC-II, CD80, or CD86. Microvesicles produced from matched uninfected cells were also evaluated. HIV infection increased MHC-II expression on T- and B-cell lines, macrophages, and peripheral blood mononclear cells (PBMC) but did not significantly alter the expression of CD80 or CD86. HIV virions derived from all MHC-II-positive cell types incorporated high levels of MHC-II, and both virions and microvesicles preferentially incorporated CD86 compared to CD80. CD45, expressed at high levels on cells, was identified as a protein present at high levels on microvesicles but was not detected on HIV-1 virions. Virion-associated, host cell-derived molecules impacted the ability of noninfectious HIV virions to trigger death in freshly isolated PBMC. These results demonstrate the preferential incorporation or exclusion of host cell proteins by budding HIV-1 virions and suggest that host cell proteins present on HIV-1 virions may contribute to the overall pathogenesis of HIV-1 infection.

NK cells recognize and kill tumor cells and normal cells, and these play an important role in immune defense in cancer, infectious disease, and autoimmunity. NK killing is regulated by positive or negative signals derived from the interaction of surface receptors with ligands on the target cells. However, the mechanisms controlling the proliferation and maintenance of NK cells in normal human individuals are less clearly defined. In this study, using an entirely autologous system, we demonstrate that human peripheral blood CD3-CD56+, killer cell-inhibitory receptor (KIR)-expressing cells proliferate and expand in response to LPS. These responses are enhanced in the presence of anti-IL-10 receptor-blocking Abs or on the removal of CD14+ cells from the cultures. This enhancement is also reflected in substantial increases in cytolytic activity and IFN-gamma production. The negative effect of CD14+ cells may also be IL-10 mediated, IL-10 being lost from the culture supernatants of CD14-depleted PBMC and rIL-10 reversing the effect of this depletion. On the other hand, mRNA for the p35 and p40 subunits of IL-12 is still induced in CD14-depleted cultures. The expansion of CD3-CD56+ cells was also inhibited by CTLA4-Ig, indicating a role for CD80/86. B lymphocytes were not required for the expansion of CD3-CD56+ cells, whereas removal of MHC class II+ cells from CD14-depleted cultures resulted in a complete abrogation of these responses. Expansion of CD3-CD56+ cells was reconstituted in MHC class II-depleted cell cultures by adding back monocyte-derived dendritic cells. These results indicate that the responses of CD3-CD56+ NK cells to LPS may be driven by a MHC class II+ B7+ CD14- peripheral population, most likely blood dendritic cells.