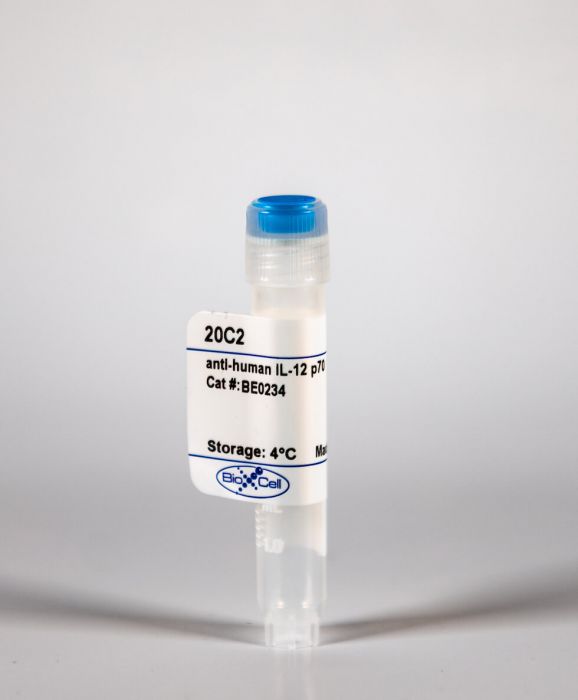 The 20C2 monoclonal antibody reacts with human interleukin-12 (IL-12), a heterodimeric 70 kDa (p70) cytokine consisting of two covalently linked subunits, 40 kDa (p40) and 35 kDa (p35). IL-12 is secreted by activated monocytes, macrophages, and dendritic cells in response to bacterial pathogens or products such as lipopolysaccharides (LPS). IL-12 is a potent regulator of cell-mediated immune responses and plays a key role in the development of Th1 responses, leading to IFNγ and IL-2 production.

Vitamin D is recognized as a potent immunosuppressive drug. The suppressive effects of vitamin D are attributed to its physiologically active metabolite 1,25 dihydroxy vitamin D3 (calcitriol), which was shown, to prime dendritic cells (DCs) to promote the development of regulatory T (Treg) cells. Despite the potential benefit in treating autoimmune diseases, clinical application of calcitriol is hindered by deleterious side effects manifested by hypercalcemia and hypercalciuria. Conversely, the physiological precursors of calcitriol, vitamin D3 (cholecalciferol) and its first metabolite 25-hydroxy vitamin D3 (calcidiol) are widely applied in the clinic due to their low calcimic burden. However, the mechanisms by which cholecalciferol and calcidiol may modulate adaptive immunity remain elusive. This prompted us to unravel the immunosuppressive capacity of these precursors by assessing their influence on DC functions and the subsequent polarization of naive CD4(+) T cells. In this study we show that, whereas cholecalciferol has insignificant effects on DC maturation and cytokine production, it only weakly primed DCs to induce suppressive T cells. However, like calcitriol, calcidiol not only exerted an inhibitory effect on DC maturation and cytokine production, and primed DCs to promote the development of suppressive IL-10-producing Treg cells. Strikingly, in contrast to the population of IL-10-producing Treg cells induced by calcitriol-primed DCs, the IL-10-producing Treg cells induced by calcidiol-primed DCs exhibited sustained IFN-gamma production in face of their suppressive capacity. Experiments with the steroid synthesis inhibitor ketoconazole indicated that the immunomodulatory features of the precursors are dependent on their conversion into calcitriol. Collectively, calcidiol is a potent immune modulator, which may be more adequate than calcitriol for the treatment of chronic inflammatory diseases, since it is less hypercalcimic. This may be of particular interest for the treatment of allergic disease, where concurrent suppression and sustained IFN-gamma production by Treg cells effectively counterbalance the Th2-dominated immune responses.

Secondary infections with Streptococcus pneumoniae (SP) are frequently observed following influenza A virus (IAV) infection and have a substantial impact on global health. Despite this, the basis for the disease progression is incompletely understood. To investigate the effect of co-infection on human monocyte-derived dendritic cells (MDDCs) we analysed the expression of clinically important pro-inflammatory and immune-modulatory cytokines. IAV infection or treatment with supernatants from IAV-infected cell cultures resulted in priming of the DCs which subsequently influenced the production of IL-12p70, as well as IL-6, following SP infection. Co-infection of the same cell was not required but this effect was dependent on the time, dose and duration of the infections, as well as pathogen viability, bacterial uptake and endosome acidification. Bacterially infected cells were characterized as the main producers of IL-12p70. Finally, we showed that type I interferons were primarily responsible for the priming of IL-12p70 that was observed by infection with IAV. These results provide a probable mechanism for the elevated levels of particular cytokines observed in IAV and SP co-infected cell cultures with implications for the pathogenic outcome observed during in vivo infection.

Recent reports have attributed an immunoregulatory role to the mammalian target of rapamycin (mTOR), a key serine/threonine protein kinase integrating input from growth factors and nutrients to promote cell growth and differentiation. In the present study, we investigated the role of the mTOR pathway in Th2 induction by human monocyte-derived dendritic cells (moDCs). Using a co-culture system of human lipopolysaccharide (LPS)-matured moDCs and allogeneic naive CD4(+) T cells, we show that inhibition of mTOR by the immunosuppressive drug rapamycin reduced moDC maturation and promoted Th2 skewing. Next, we investigated whether antigens from helminth parasites, the strongest natural inducers of Th2 responses, modulate moDCs via the mTOR pathway. In contrast to rapamycin, neither Schistosoma mansoni-soluble egg antigens (SEA) nor its major immunomodulatory component omega-1 affected the phosphorylation of S6 kinase (S6K) and 4E-binding protein 1 (4E-BP1), downstream targets of mTORC1. Finally, we found that the effects of rapamycin and SEA/omega-1 on Th2 skewing were additive, suggesting two distinct underlying molecular mechanisms. We conclude that conditioning human moDCs to skew immune responses towards Th2 can be achieved via an mTOR-dependent and -independent pathway triggered by rapamycin and helminth antigens, respectively.

IL-12 is a heterodimeric cytokine, composed of a p40 and a p35 subunit, that exerts its biological effects by binding to specific cell surface receptors. Two IL-12R proteins, designated human IL-12 (huIL-12) receptor beta1 (huIL-12Rbeta1) and huIL-12Rbeta2, have been previously identified. These IL-12R individually bind huIL-12 with low affinity and in combination bind huIL-12 with high affinity and confer IL-12 responsiveness. In this study the interactions of hulL-12 with these two identified human IL-12R protein subunits are examined. The heterodimer-specific anti-huIL-12 mAb 20C2, which neutralizes huIL-12 bioactivity but does not block 125I-huIL-12 binding to huIL-12Rbeta1, blocked binding of huIL-12 to huIL-12Rbeta2. In contrast, anti-huIL-12Rbeta1 mAb 2B10 and mouse IL-12 p40 subunit homodimer (mo(p40)2) blocked 125I-huIL-12 binding to huIL-12Rbeta1, but not to huIL-12Rbeta2. Therefore, two classes of IL-12 inhibitors can be identified that differ in their ability to block huIL-12 interaction with either huIL-12Rbeta1 or huIL-12Rbeta2. Both mo(p40)2 and 20C2 blocked high affinity binding to huIL-12Rbeta1/beta2-cotransfected COS-7 cells, although, as previously reported, mo(p40)2 does not block high affinity binding to IL-12R on PHA-activated human lymphoblasts. Furthermore, these two classes of IL-12 inhibitors synergistically decreased hulL-12-stimulated proliferation and IFN-gamma production. Therefore, IL-12, in binding to the high affinity IL-12R, interacts with IL-12Rbeta1 primarily via regions on the IL-12 p40 subunit and with IL-12Rbeta2 via 20C2-reactive, heterodimer-specific regions of IL-12 to which the p35 and p40 subunits both contribute.