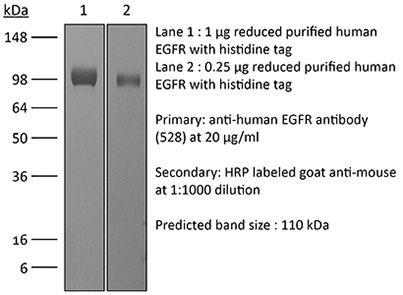 The 528 monoclonal antibody reacts with an epitope on the extracellular domain of human EGFR (epidermal growth factor receptor) also known as ErbB-1. EGFR is a 170 kDa cell-surface receptor and belongs to the ErbB family of receptors. EGFR signaling is activated upon binding one of its ligands including epidermal growth factor (EGF), transforming growth factor α (TGF α), Amphiregulin, and heparin binding-EGF (HB-EGF). Upon activation, EGFR transitions from an inactive monomeric form to an active homodimer. This initiates several downstream signal transduction cascades including the MAPK, Akt and JNK pathways, leading to DNA synthesis and cell proliferation. EGFR overexpression or constitutive activation are associated with many cancers. For this reason, anti-EGFR monoclonal antibody mediated immunotherapies are currently being explored as cancer treatments. The 528 antibody has been reported to block EGF binding to its receptor and inhibit A431 tumor formation in nude mice.

The epidermal growth factor receptor (EGFR) is a well characterized receptor-tyrosine kinase that functions in development and serves a vital role in many human cancers. Understanding EGFR regulatory mechanisms, and hence approaches for clinical intervention, has focused on ligand-receptor interactions and tyrosine kinase activity. Here, we show using the NCI-H460 lung and A431 epidermoid human cancer cell lines that EGFR binding to anterior gradient homolog 2 (AGR2) in the endoplasmic reticulum is required for receptor delivery to the plasma membrane and thus EGFR signaling. Reduced AGR2 protein levels or mutation of an essential cysteine in the active site result in decreased cell surface EGFR and a concomitant decrease in signaling as reflected by AREG, EGR1, and FOS expression. Similar to previously described EGFR nulls, an AGR2 null also resulted in embryonic lethality. Consistent with its role in regulating EGFR-mediated signaling, AGR2 expression is also enhanced in many human cancers and promotes the transformed phenotype. Furthermore, EGFR-mediated signaling in NCI-H460 cells, which are resistant to the tyrosine kinase inhibitor AG1478, is also disrupted with reduced AGR2 expression. The results provide insights into why cancer prognosis or response to therapy often does not correlate with EGFR protein or RNA levels because they do not reflect delivery to the cell surface where signaling is initiated. AGR2, therefore, represents a novel post-translational regulator of EGFR-mediated signaling and a promising target for treating human cancers.

Intestinal and systemic illnesses have been linked to increased gut permeability. Bile acids, whose luminal profile can be altered in human disease, modulate intestinal paracellular permeability. We investigated the mechanism by which selected bile acids increase gut permeability using a validated in vitro model. Human intestinal Caco-2 cells were grown in monolayers and challenged with a panel of bile acids. Transepithelial electrical resistance and luminal-to-basolateral fluxes of 10-kDa Cascade blue-conjugated dextran were used to monitor paracellular permeability. Immunoprecipitation and immunoblot analyses were employed to investigate the intracellular pathway. Redistribution of tight junction proteins was studied by confocal laser microscopy. Micromolar concentrations of cholic acid, deoxycholic acid (DCA), and chenodeoxycholic acid (CDCA) but not ursodeoxycholic acid decreased transepithelial electrical resistance and increased dextran flux in a reversible fashion. Coincubation of 50 muM CDCA or DCA with EGF, anti-EGF monoclonal antibody, or specific src inhibitor 4-Amino-5-(4-chlorophenyl)-7-(t-butyl)pyrazolo[3,4-d]pyrimidine (PP-2) abolished the effect. A concentration of 50 muM of either CDCA or DCA also induced EGF receptor phosphorylation, occludin dephosphorylation, and occludin redistribution at the tight junction level in the same time frame and in a reversible fashion. We conclude that selected bile acids modulate intestinal permeability via EGF receptor autophosphorylation, occludin dephosphorylation, and rearrangement at the tight junction level. The effect is mediated by the src family kinases and is abolished by EGF treatment. These data also support the role of bile acids in the genesis of necrotizing enterocolitis and the protective effect of EGF treatment.

Live attenuated measles viruses of the Edmonston lineage (MV-Edm) have potent anti-tumor activity but are not entirely tumor-specific owing to widespread distribution of their native receptors, CD46 and SLAM. We have therefore developed a pseudoreceptor system that allows rescue and propagation of fully retargeted viruses displaying single-chain antibody fragments. Viruses retargeted to tumor-selective CD38, epidermal growth factor receptor (EGFR) or EGFR mutant vIII (EGFRvIII) efficiently entered cells through their respective targeted receptors in vitro and in vivo, but not through CD46 and SLAM. When administered intratumorally or intravenously to mice bearing human CD38 or EGFR-positive human tumor xenografts, the targeted viruses demonstrated specific receptor-mediated anti-tumor activity. These data provide an in vivo demonstration of antibody-directed tumor destruction by retargeted oncolytic viruses.

in vivo EGFR blockade in xenografts

Monoclonal antibody (mAb) 806 is a novel epidermal growth factor receptor (EGFR) antibody with significant antitumor activity that recognizes a mutant EGFR commonly expressed in glioma known as delta2-7 EGFR (de2-7 EGFR or EGFRvIII) and a subset of the wild-type (wt) EGFR found in cells that overexpress the receptor. We have used two human xenograft mouse models to examine the efficacy of mAb 806 in combination with mAb 528, a prototypical anti-EGFR antibody with similar specificity to cetuximab. Treatment of nude mice, bearing s.c. or i.c. tumor human xenografts expressing the wt or de2-7 EGFR, with mAbs 806 and 528 in combination resulted in additive and in some cases synergistic, antitumor activity. Interestingly, mAb 528 was also effective against xenografts expressing the ligand independent de2-7 EGFR when used as a single agent, showing that its antitumor activity is not merely mediated through inhibition of ligand binding. When used as single agents, neither mAbs 806 or 528 induced down-regulation of the de2-7 EGFR either in vitro or in vivo. In contrast, the combination of antibodies produced a rapid and dramatic decrease in the total cell surface de2-7 EGFR both in vitro and in xenografts. Consistent with this decrease in total cell surface de2-7 EGFR, we observed up-regulation of the cell cycle inhibitor p27(KIP1) and a decrease in tumor cell proliferation as measured by Ki-67 immunostaining when the antibodies were used in combination in vivo. Thus, mAb 806 can synergize with other EGFR-specific antibodies thereby providing a rationale for its translation into the clinic.

PURPOSE: Glioblastoma multiforme (GBM) is a highly lethal neoplasm with a median survival of approximately 1 year. Only 2-5% of patients originally diagnosed with GBM will survive > or = 3 years. Whether tumors from these long-term survivors (LTSs) exhibit molecular genetic differences compared with typical GBM survivors is not known. EXPERIMENTAL DESIGN: Tumors from 41 patients initially diagnosed with GBM and having survival > or = 3 years (LTS) was compared with 48 GBMs from short-term survivors (STSs, survival < or = 1.5 years) for p53 aberrations (expression/mutation), epidermal growth factor receptor overexpression, mdm2 overexpression, and proliferation index. RESULTS: Nuclear p53 expression was significantly more frequent in the LTS group. However, no difference in the rate of p53 mutation was evident. Overexpression of epidermal growth factor receptor was slightly more frequent in the STS patients, but this is not statistically different. mdm2 overexpression was significantly more frequent in the STSs, and this group had a significantly higher median proliferation index. CONCLUSION: Long-term GBM survivors were more likely to have p53-overexpressing tumors, although a difference in p53 mutation rate could not be detected. They were less likely to exhibit mdm2 overexpression and had a lower proliferation rate compared with typical GBM survivors.

These studies were undertaken to assess the relative expression and autocrine activation of the epidermal growth factor receptor (EGFR) in normal and transformed prostatic epithelial cells and to determine whether EGFR activation plays a functional role in androgen-stimulated growth of prostate cancer cells in vitro. EGFR expression was determined by Western blot analysis and ELISA immunoassays. Immunoprecipitation of radiophosphorylated EGFR and evaluation of tyrosine phosphorylation was used to assess EGFR activation. The human androgen-independent prostate cancer cell lines PC3 and DU145 exhibited higher levels of EGFR expression and autocrine phosphorylation than normal human prostatic epithelial cells or the human androgen-responsive prostate cancer cell line LNCaP. PC3 and DU145 cells also showed higher levels of autonomous growth under serum-free defined conditions. Normal prostatic epithelial cells expressed EGFR but did not exhibit detectable levels of EGFR phosphorylation when cultured in the absence of exogenous EGF. Addition of EGF stimulated EGFR phosphorylation and induced proliferation of normal cells. LNCaP cells exhibited autocrine phosphorylation of EGFR but did not undergo significant proliferation when cultured in the absence of exogenous growth factors. A biphasic growth curve was observed when LNCaP cells were cultured with dihydrotestosterone (DHT). Maximum proliferation occurred at 1 nM DHT with regression of the growth response at DHT concentrations greater than 1 nM. However, neither EGFR expression nor phosphorylation was altered in LNCaP cells after androgen stimulation. In addition, DHT-stimulated growth of LNCaP cells was not inhibited by anti-EGFR. These studies show that autocrine activation of EGFR is a common feature of prostatic carcinoma cells in contrast to normal epithelial cells. However, EGFR activation does not appear to play a functional role in androgen-stimulated growth of LNCaP cells in vitro.

Epidermal growth factor (EGF) at 3 nM maximally inhibits the proliferation of A431 epidermoid carcinoma cells. We show that at lower concentrations, in the range of 3-100 pM, EGF has a mitogenic effect on A431 cells. In the presence of 100 nM anti-EGF-receptor monoclonal IgG (designated 528), which inhibits A431 cell proliferation and blocks greater than 95% of EGF binding, EGF becomes mitogenic for A431 cells at concentrations up to 3 nM. These results suggest that a minor population of high-affinity EGF receptors may be involved in stimulation of A431 cell proliferation. Saturation binding assays with 125I-labeled EGF indicate that approximately equal to 0.1-0.2% of receptors for EGF are high-affinity receptors that bind EGF with an estimated Kd of 7 X 10(-11) M. This affinity is nearly 2 orders of magnitude higher than that of the remaining EGF receptors. Although A431 cell proliferation is maximally inhibited by nonsaturating amounts of EGF (3 nM), maximal inhibition by 528 IgG (approximately equal to 70% of maximal inhibition by EGF) requires saturating concentrations of antibody (approximately equal to 15 nM). Unlike EGF, rapid down-regulation is not observed with 528 IgG. These results indicate different mechanisms of growth inhibition of A431 cells by EGF and 528 IgG.