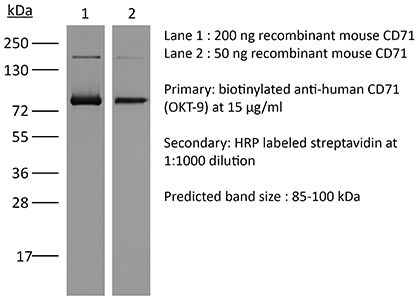 The OKT-9 monoclonal antibody reacts with human CD71 also known as Transferrin receptor protein 1 (TfR1). CD71 is a 95 kDa type II transmembrane glycoprotein that is expressed by immature proliferating cells, reticulocytes, and erythroid precursors. CD71 influences cellular proliferation by mediating the uptake of iron via ferrotransferrin binding and the recycling of apotransferrin to the cell surface. Mice that are deficient in this receptor show impaired erythroid development and abnormal iron homeostasis. CD71 is a potential new target in cases of human leukemia and lymphoma.

Clathrin-mediated endocytosis (CME) is key to maintaining the transmembrane protein composition of cells’ limiting membranes. During mammalian CME, a reversible phosphorylation event occurs on Thr156 of the μ2 subunit of the main endocytic clathrin adaptor, AP2. We show that this phosphorylation event starts during clathrin-coated pit (CCP) initiation and increases throughout CCP lifetime. μ2Thr156 phosphorylation favors a new, cargo-bound conformation of AP2 and simultaneously creates a binding platform for the endocytic NECAP proteins but without significantly altering AP2’s cargo affinity in vitro. We describe the structural bases of both. NECAP arrival at CCPs parallels that of clathrin and increases with μ2Thr156 phosphorylation. In turn, NECAP recruits drivers of late stages of CCP formation, including SNX9, via a site distinct from where NECAP binds AP2. Disruption of the different modules of this phosphorylation-based temporal regulatory system results in CCP maturation being delayed and/or stalled, hence impairing global rates of CME.

BACKGROUND AIMS: For transplantation, hematopoietic stem cells (HSC) are obtained from bone marrow, cord blood and mobilized adult peripheral blood. HSCs are present in the blood of healthy adults and can be recovered in leuko-reduction system chambers, with a potential yield of 1 to 4 x 10(6) CD34+ cells per unit. Some groups have investigated this valuable source of stem cells; however, investigations are still needed to support their use. METHODS: CD34+ cells were purified from leuko-reduction system chambers and cultured with a defined custom medium without animal protein and supplemented with interleukin-3, interleukin-6, Fms-like tyrosine kinase 3, stem cell factor and thrombopoietin. Cells were cultured under 8% and 21% oxygen levels. With the use of multiparametric flow cytometry analysis, the phenotypes of emerging populations were compared between oxygen levels and resting CD34+ cells. Both conventional gating and clustering analysis were used to visualize the cellular outcome. RESULTS: A maximum expansion of 20-fold was obtained without major differences in viability, number of cells or cellular heterogeneity between atmospheric and physiologic oxygen conditions. Worthy of note, phenotype analysis revealed that megakaryocyte and erythrocyte progenitors were favored, albeit more moderately when submitted to 8% O2. CONCLUSIONS: This study suggests that the bias of cultured blood CD34+ cells toward megakaryocyte and erythrocyte progenitor cells can be reduced by use of 8% pO2. It also shows how clustering software, such as SPADE, can help visualize the complexity of stem cell differentiation.

Interleukin-34 (IL-34) is a cytokine consisting of a 39kD homodimer, shown to be a ligand for both the Macrophage Colony Stimulating Factor (M-CSF/CSF-1) receptor and the Receptor-like protein tyrosine phosphatase-zeta (RPTP-z). IL-34 has been shown to promote monocyte viability and proliferation as well as the differentiation of bone marrow cells into macrophage progenitors. Published work on IL-34 involves its effects on normal hematopoietic and osteoclast progenitors. However, it is not known whether IL-34 has biologic effects in cancer, including leukemia. Here we report that the biological effects of IL-34 include induction of differential expression of Interleukins-1alpha and -1beta as well as induction of differentiation of U937, HL-60 and THP-1 leukemia cell lines demonstrating monocyte-like characteristics. The ability of IL-34 to induce monocytic-like differentiation is supported by strong morphological and functional evidence. Cell surface markers of myeloid lineage, CD64 and CD86, remain constant while the levels of CD11b and CD71 decline with IL-34 treatment. IL-34 also induced increases in CD14 and CD68 expression, further supporting maturation toward monocytic character. IL-34-induced differentiated U937 and THP-1 cell lines exhibited biological functions such as endocytosis and respiratory burst activities. Collectively, we conclude that while IL-34 does not induce cell growth or proliferation, it is able to induce differentiation of leukemia cell lines from monoblastic precursor cells towards monocyte- and macrophage-like cells, mediated through the JAK/STAT and PI3K/Akt pathways. To our knowledge, this is the first report that IL-34 induces differentiation in human leukemic cells, let alone any cancer model.

Surface molecule profiles undergo dynamic changes in physiology and pathology, serve as markers of cellular state and phenotype and can be exploited for cell selection strategies and diagnostics. The isolation of well-defined cell subsets is needed for in vivo and in vitro applications in stem cell biology. In this technical report, we present an approach for defining a subset of interest in a mixed cell population by flow cytometric detection of intracellular antigens. We have developed a fully validated protocol that enables the co-detection of cluster of differentiation (CD) surface antigens on fixed, permeabilized neural cell populations defined by intracellular staining. Determining the degree of co-expression of surface marker candidates with intracellular target population markers (nestin, MAP2, doublecortin, TUJ1) on neuroblastoma cell lines (SH-SY5Y, BE(2)-M17) yielded a combinatorial CD49f(-)/CD200(high) surface marker panel. Its application in fluorescence-activated cell sorting (FACS) generated enriched neuronal cultures from differentiated cell suspensions derived from human induced pluripotent stem cells. Our data underlines the feasibility of using the described co-labeling protocol and co-expression analysis for quantitative assays in mammalian neurobiology and for screening approaches to identify much needed surface markers in stem cell biology.

Moura, I. C., et al. (2001). "Identification of the transferrin receptor as a novel immunoglobulin (Ig)A1 receptor and its enhanced expression on mesangial cells in IgA nephropathy" J Exp Med 194(4): 417-425. PubMed

The biological functions of immunoglobulin (Ig)A antibodies depend primarily on their interaction with cell surface receptors. Four IgA receptors are presently characterized. The FcalphaRI (CD89) expressed by myeloid cells selectively binds IgA1 and IgA2 antibodies, whereas the poly-IgR, Fcalpha/muR, and asialoglycoprotein receptors bind other ligands in addition to IgA. IgA binding by mesangial cells, epithelial cells, and proliferating lymphocytes is also well documented, but the nature of the IgA receptors on these cells remains elusive. A monoclonal antibody (A24) is described here that specifically blocks IgA binding to epithelial and B lymphocyte cell lines. Both the A24 antibody and IgA1 myelomas bind a cell surface protein that is identified as the transferrin receptor (CD71). The transferrin receptor selectively binds IgA1 antibodies, monomeric better than polymeric forms, and the IgA1 binding is inhibitable by transferrin. Transferrin receptor expression is upregulated on cultured mesangial cells as well as on glomerular mesangial cells in patients with IgA nephropathy. The characterization of transferrin receptor as a novel IgA1 receptor on renal mesangial cells suggests its potential involvement in the pathogenesis of IgA nephropathy.