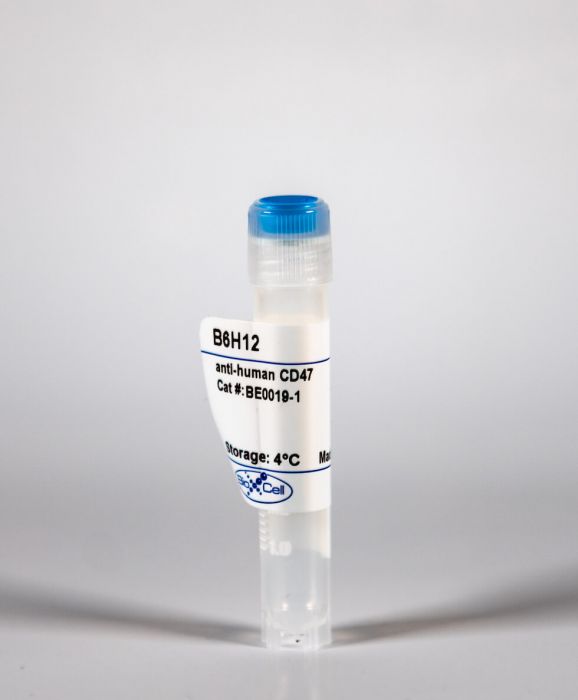 The B6H12 monoclonal antibody reacts with human CD47 otherwise known as integrin-associated protein (IAP), and neurophilin. CD47 is an approximately 50 kDa glycosylated five transmembrane protein that is ubiquitously expressed by both hematopoietic cells such as T and B lymphocytes, monocytes, platelets and erythrocytes and non-hematopoietic cells. CD47 is involved in a range of cellular processes, including apoptosis, proliferation, adhesion, and migration. Furthermore, it plays a key role in immune and angiogenic responses. CD47 is a receptor for thrombospondin-1 (TSP-1), a secreted glycoprotein that plays a role in vascular development and angiogenesis. CD47 Is has been found to be overexpressed in many different tumor cells. Because of this, anti-CD47 monoclonal antibodies have been proposed and studied as a therapeutic treatment for human cancers. The B6H12 antibody has been shown to neutralize CD47 and inhibit the growth of hepatocellular carcinoma cells in vitro.

Programmed cell death protein 1 (PD-1) is an immune checkpoint receptor that is upregulated on activated T cells for the induction of immune tolerance. Tumour cells frequently overexpress the ligand for PD-1, programmed cell death ligand 1 (PD-L1), facilitating their escape from the immune system. Monoclonal antibodies that block the interaction between PD-1 and PD-L1, by binding to either the ligand or receptor, have shown notable clinical efficacy in patients with a variety of cancers, including melanoma, colorectal cancer, non-small-cell lung cancer and Hodgkin’s lymphoma. Although it is well established that PD-1-PD-L1 blockade activates T cells, little is known about the role that this pathway may have in tumour-associated macrophages (TAMs). Here we show that both mouse and human TAMs express PD-1. TAM PD-1 expression increases over time in mouse models of cancer and with increasing disease stage in primary human cancers. TAM PD-1 expression correlates negatively with phagocytic potency against tumour cells, and blockade of PD-1-PD-L1 in vivo increases macrophage phagocytosis, reduces tumour growth and lengthens the survival of mice in mouse models of cancer in a macrophage-dependent fashion. This suggests that PD-1-PD-L1 therapies may also function through a direct effect on macrophages, with substantial implications for the treatment of cancer with these agents.

Human hepatocellular carcinoma (HCC) has a high rate of tumor recurrence and metastasis, resulting in shortened survival times. The efficacy of current systemic therapies for HCC is limited. In this study, we used xenograft tumor models to investigate the use of antibodies that block CD47 and inhibit HCC tumor growth. Immunostaining of tumor tissue and HCC cell lines demonstrated CD47 over-expression in HCC as compared to normal hepatocytes. Macrophage phagocytosis of HCC cells was increased after treatment with CD47 antibodies (CD47mAbs) that block CD47 binding to SIRPalpha. Further, CD47 blockade inhibited tumor growth in both heterotopic and orthotopic models of HCC, and promoted the migration of macrophages into the tumor mass. Our results demonstrate that targeting CD47 by specific antibodies has potential immunotherapeutic efficacy in human HCC.

Sorafenib is a new standard treatment for patients with advanced hepatocellular carcinoma (HCC). However, the survival benefit of this treatment is modest, partly owing to drug resistance. Recent evidence has demonstrated the existence of tumor-initiating cells (T-ICs) as the culprit for treatment resistance. To examine whether sorafenib resistance was a result of the presence of liver T-ICs, we developed sorafenib-resistant HCC cells both in vitro and in vivo through continuous exposure to sorafenib. Using these models, we found that sorafenib-resistant clones demonstrated enhanced T-IC properties, including tumorigenicity, self-renewal, and invasiveness. In addition, several T-IC markers were found to be up-regulated, among which CD47 was found to be most significant. Using chromatin immunoprecipitation assays and expression analyses, CD47 expression was found to be regulated by nuclear factor kappa B (NF-kappaB) through a specific response element in the promoter of CD47, and the site occupancy and expression were increased and decreased upon stimulation and inhibition of NF-kappaB, respectively. Consistently, NF-kappaB was activated in sorafenib-resistant HCC cells, and this finding was confirmed in clinical HCC samples, which showed a positive correlation between NF-kappaB and CD47 expression. Functional characterization of CD47 in sorafenib-resistant HCC cells was evaluated using a lentivirus-based knockdown approach and showed increased sensitization to sorafenib upon CD47 knockdown. Furthermore, blockade of CD47 using anti-CD47 antibody (Ab) showed a similar effect. Using a patient-derived HCC xenograft mouse model, we found that anti-CD47 Ab (500 mug/mouse) in combination with sorafenib (100 mg/kg, orally) exerted synergistic effects on tumor suppression, as compared with sorafenib and anti-CD47 Ab alone. CONCLUSIONS: NF-kappaB-mediated CD47 up-regulation promotes sorafenib resistance, and targeting CD47 in combination with sorafenib is an attractive therapeutic regimen for the treatment of HCC patients.

Identification of therapeutic targets against tumor-initiating cells (TICs) is a priority in the development of new therapeutic paradigms against cancer. We enriched a TIC population capable of tumor initiation and self-renewal by serial passages of hepatospheres with chemotherapeutic agents. In chemoresistant hepatospheres, CD47 was found to be up-regulated, when compared with differentiated progenies. CD47 is preferentially expressed in liver TICs, which contributed to tumor initiation, self-renewal, and metastasis and significantly affected patients’ clinical outcome. Knockdown of CD47 suppressed stem/progenitor cell characteristics. CD47(+) hepatocellular carcinoma (HCC) cells preferentially secreted cathepsin S (CTSS), which regulates liver TICs through the CTSS/protease-activated receptor 2 (PAR2) loop. Suppression of CD47 by morpholino approach suppressed growth of HCC in vivo and exerted a chemosensitization effect through blockade of CTSS/PAR2 signaling. CONCLUSION: These data suggest that CD47 may be an attractive therapeutic target for HCC therapy.

Mobilization of the T-cell response against cancer has the potential to achieve long-lasting cures. However, it is not known how to harness antigen-presenting cells optimally to achieve an effective antitumor T-cell response. In this study, we show that anti-CD47 antibody-mediated phagocytosis of cancer by macrophages can initiate an antitumor T-cell immune response. Using the ovalbumin model antigen system, anti-CD47 antibody-mediated phagocytosis of cancer cells by macrophages resulted in increased priming of OT-I T cells [cluster of differentiation 8-positive (CD8(+))] but decreased priming of OT-II T cells (CD4(+)). The CD4(+) T-cell response was characterized by a reduction in forkhead box P3-positive (Foxp3(+)) regulatory T cells. Macrophages following anti-CD47-mediated phagocytosis primed CD8(+) T cells to exhibit cytotoxic function in vivo. This response protected animals from tumor challenge. We conclude that anti-CD47 antibody treatment not only enables macrophage phagocytosis of cancer but also can initiate an antitumor cytotoxic T-cell immune response.