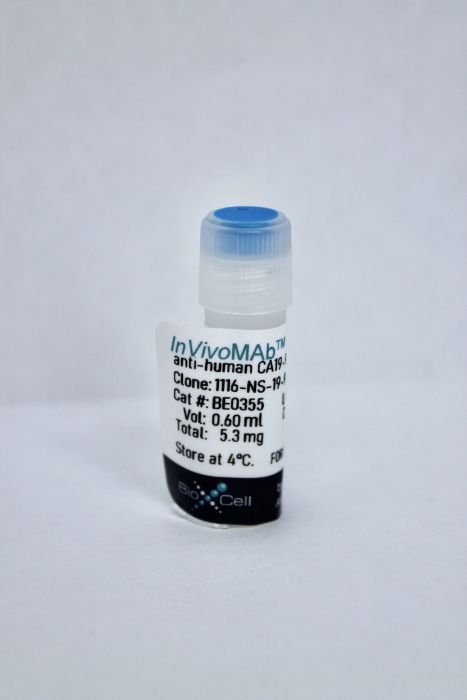 The 1116-NS-19-9 monoclonal antibody reacts with carbohydrate antigen 19-9 (CA19-9), a tetrasaccharide also known as sialylated Lewis a-antigen. CA19-9 is synthesized by glycosyltransferases that sequentially link the monosaccharide precursors onto both N-linked and O-linked glycans. CA19-9 is attached to many different proteins, including mucins, carcinoembryonic antigen, and circulating apolipoproteins. CA19-9 is not found at a high level in normal tissues, but it is found in embryonic tissue and overexpressed in certain cancers, particularly pancreatic cancer. Elevated CA19-9 levels in patients with stage I pancreatic cancer typically decrease to normal levels following surgery.

We investigated the role of carbohydrate antigen sialyl-Lewis a (sLea), an E-selectin ligand and epitope of tumor marker CA19.9, in the development of xenografts in nude mice. To this end, animals were inoculated with the human colon cancer cell line HCT-15, expressing no Lewis antigens, or with a clone expressing sLea (HCT-15-T5). The size of HCT-15-T5 xenografts appeared larger than those of HCT-15 and their average weight was over twice bigger. In both xenografts the mitotic index was found elevated, as determined by Ki-67 assay, and no apoptosis was detected in the tumor cells by both caspase 8 or TUNEL assays. Some apoptotic signals were instead detected in the vessels. Conversely, microvessel density, determined through CD-31 immunohistochemistry, was found 3.2-folds bigger in HCT-15-T5 xenografts (p<0.012). Only the membranes of HCT-15-T5 cells grown as xenografts reacted intensively with the anti CA19.9 antibody 1116-NS-19-9 by immunofluorescence, but not by immunohistochemistry. Unknown structures were instead stained by such technique in both xenografts, as were in mouse tissues not expressing the antigen and in human colon adenocarcinoma. We conclude that expression of sLea on the surface of colon cancer cells improves xenograft growth and is associated with enhanced angiogenesis, while immunohistochemistry with 1116-NS-19-9 antibody appears not suitable to determine CA19.9 expression.

The Sd(a) blood group carbohydrate structure is expressed in the normal gastrointestinal mucosa. We reported previously that the expression of Sd(a) carbohydrate structures and beta1,4-N-acetylgalactosaminyltransferase (beta1,4GalNAcT) activity responsible for Sd(a) synthesis were remarkably decreased in cancer lesions of the gastrointestinal tract. In this study, we found that Sd(a) antigen was expressed mainly in chief cells of normal stomach but not in cancer tissue by immunohistologic staining. In separated gastric mucosal cells, the Sd(a) glycolipids and beta1,4GalNAcT activity were concentrated in a fraction that contained chief cells as a major population. We cloned the cDNA encoding the glycosyltransferase that catalyzes the synthesis of Sd(a) (Sd(a)-beta1,4GalNAcT). Introduction of this cloned cDNA into KATO III gastric or HT29 colonic cancer cell lines, which originally expressed the E-selectin ligands, sialyl Lewis(x) and sialyl Lewis(a), resulted in a marked increase in cell-surface expression of Sd(a) along with the concomitant total loss of both sialyl Lewis(x) and sialyl Lewis(a). Both KATO III and HT29 cells transfected with the Sd(a)-beta1,4GalNAcT gene showed significantly decreased adhesion to activated human umbilical vein endothelial cells when compared with mock-transfected cells. Sd(a) determinants showed no direct binding to Siglec-3, -5, -7, and -9. These Sd(a)-beta1,4GalNAcT-transfected cells showed strikingly reduced metastatic potential in vivo when compared with mock-transfected cells. In summary, forced expression of Sd(a) carbohydrate determinant caused remarkable elimination of carbohydrate ligands for selectin and reduced metastasis of human gastrointestinal tract cancer cells.

A 53-year-old man presented with recurrence of a neurenteric cyst with malignant transformation in the foramen magnum 3.5 years after total resection of the original tumor had been reported. For 2 years following the initial surgery, the patient had been in good condition, but then underwent ventriculoperitoneal shunt placement for intracranial hypertension. At the time there was no evidence of recurrence of the tumor on magnetic resonance (MR) images. One and one-half years later, he presented with headache and anorexia. A massive recurrent tumor was identified on MR images. The tumor was severely adhesive to the brainstem, cranial nerves, and vessels, allowing only partial resection. Histological examination of tumor specimens obtained during the first and second craniotomies indicated a malignant change from a typical neurenteric cyst with a one-layer epithelium in the first specimen to an adenocarcinoma with papillary proliferation in the second. The results of various immunohistochemical studies of the first specimen were typical of those of a neurenteric cyst. The second specimen displayed stronger staining of carbohydrate 19-9 and carcinoembryonic antigens than the initial specimen. The percentage of Ki-67 antigen (MIB-1)-positive cells increased from 0% in the first specimen to 6.7% in the second. To the authors’ knowledge this is the first case in which malignant transformation has been demonstrated after total resection of a neurenteric cyst in the foramen magnum.