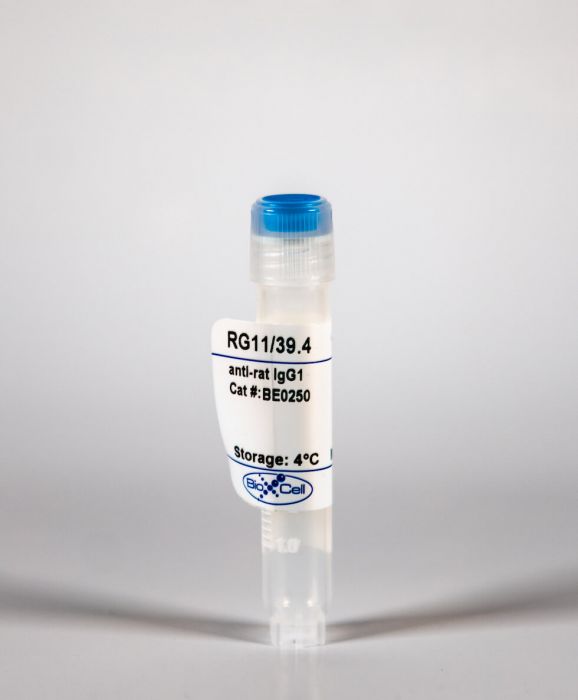 The RG11/39.4 monoclonal antibody reacts with the Fc region of rat IgG1. It is commonly used as a secondary antibody to detect rat IgG1 antibodies in various diagnostic applications.

The macrophage-inducible C-type lectin Mincle has recently been identified to be a pattern recognition receptor sensing mycobacterial infection via recognition of the mycobacterial cell wall component trehalose-6′,6-dimycolate (TDM). However, its role in systemic mycobacterial infections has not been examined so far. Mincle-knockout (KO) mice were infected intravenously with Mycobacterium bovis BCG to mimic the systemic spread of mycobacteria under defined experimental conditions. After intravenous infection with M. bovis BCG, Mincle-KO mice responded with significantly higher numbers of mycobacterial CFU in spleen and liver, while reduced granuloma formation was observed only in the spleen. At the same time, reduced Th1 cytokine production and decreased numbers of gamma interferon-producing T cells were observed in the spleens of Mincle-KO mice relative to the numbers in the spleens of wild-type (WT) mice. The effect of adoptive transfer of defined WT leukocyte subsets generated from bone marrow cells of zDC(+/DTR) mice (which bear the human diphtheria toxin receptor under the control of the classical dendritic cell-specific zinc finger transcription factor zDC) to specifically deplete Mincle-expressing classical dendritic cells (cDCs) but not macrophages after diphtheria toxin application on the numbers of splenic and hepatic CFU and T cell subsets was then determined. Adoptive transfer experiments revealed that Mincle-expressing splenic cDCs rather than Mincle-expressing macrophages contributed to the reconstitution of attenuated splenic antimycobacterial immune responses in Mincle-KO mice after intravenous challenge with BCG. Collectively, we show that expression of Mincle, particularly by cDCs, contributes to the control of splenic M. bovis BCG infection in mice.

Recent evidence from several groups indicates that IL-17-producing Th17 cells, rather than, as once was thought, IFN-gamma-producing Th1 cells, can represent the key effector cells in the induction/development of several autoimmune and allergic disorders. Although Th17 cells exhibit certain phenotypic and developmental differences from Th1 cells, the extent of the differences between these two T cell subsets is still not fully understood. We found that the expression profile of cell surface molecules on Th17 cells has more similarities to that of Th1 cells than Th2 cells. However, although certain Th1-lineage markers [i.e., IL-18 receptor alpha, CXCR3, and T cell Ig domain, mucin-like domain-3 (TIM-3)], but not Th2-lineage markers (i.e., T1/ST2, TIM-1, and TIM-2), were expressed on Th17 cells, the intensity of expression was different between Th17 and Th1 cells. Moreover, the expression of CTLA-1, ICOS, programmed death ligand 1, CD153, Fas, and TNF-related activation-induced cytokine was greater on Th17 cells than on Th1 cells. We found that IL-23 or IL-17 can suppress Th1 cell differentiation in the presence of exogenous IL-12 in vitro. We also confirmed that IL-12 or IFN-gamma can negatively regulate Th17 cell differentiation. However, these cytokines could not modulate such effects on T cell differentiation in the absence of APC.

The inside-out signaling involved in the activation of LFA-1-mediated cell adhesion is still poorly understood. Here we examined the role of the SH2-containing inositol phosphatase (SHIP), a major negative regulator of intracellular signaling, in this process. Wild-type SHIP and a phosphatase-deficient mutant SHIP were overexpressed in the murine myeloid cell line, DA-ER, and the effects on LFA-1-mediated cell adhesion to ICAM-1 (CD54) were tested. Overexpression of wild-type SHIP significantly enhanced cell adhesion to immobilized ICAM-1, and PMA, IL-3, or erythropoietin further augmented this adhesion. In contrast, phosphatase dead SHIP had no enhancing effects. Furthermore, PMA-induced activation of LFA-1 on DA-ER cells overexpressing wild-type SHIP was dependent on protein kinase C but independent of mitogen-activated protein kinase activation, whereas cytokine-induced activation was independent of protein kinase C and mitogen-activated protein kinase activation but required phosphatidylinositol-3 kinase activation. These results suggest that SHIP may regulate two distinct inside-out signaling pathways and that the phosphatase activity of SHIP is essential for both of them.