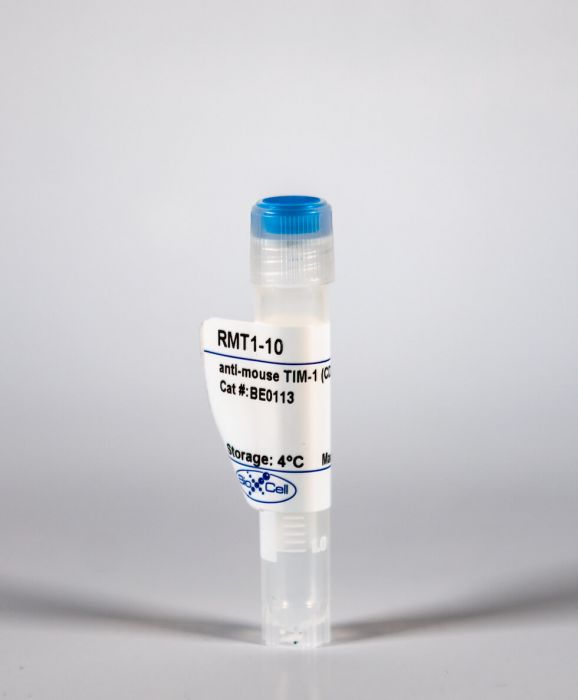 The RMT1-10 monoclonal antibody reacts with mouse T cell immunoglobulin and mucin domain 1 (TIM-1) also known as CD365. TIM-1 is a type I cell-surface glycoprotein and member of the Ig superfamily. TIM-1 is preferentially expressed on TH2 cells and has been identified as a stimulatory molecule for T cell activation. The TIM gene family, plays critical roles in regulating the immune response to viral infection. TIM-1 is also involved in allergic responses, asthma, and transplant tolerance. The RMT1-10 antibody has been shown to neutralize TIM-1 in vivo and reduce the severity of EAE, in mice studies.

Apart from their role in humoral immunity, B cells can exhibit IL-10-dependent regulatory activity (Bregs). These regulatory subpopulations have been shown to inhibit inflammation and allograft rejection. However, our understanding of Bregs has been hampered by their rarity, lack of a specific marker, and poor insight into their induction and maintenance. We previously demonstrated that T cell immunoglobulin mucin domain-1 (TIM-1) identifies over 70% of IL-10-producing B cells, irrespective of other markers. We now show that TIM-1 is the primary receptor responsible for Breg induction by apoptotic cells (ACs). However, B cells that express a mutant form of TIM-1 lacking the mucin domain (TIM-1(Deltamucin) ) exhibit decreased phosphatidylserine binding and are unable to produce IL-10 in response to ACs or by specific ligation with anti-TIM-1. TIM-1(Deltamucin) mice also exhibit accelerated allograft rejection, which appears to be due in part to their defect in both baseline and induced IL-10(+) Bregs, since a single transfer of WT TIM-1(+) B cells can restore long-term graft survival. These data suggest that TIM-1 signaling plays a direct role in Breg maintenance and induction both under physiological conditions (in response to ACs) and in response to therapy through TIM-1 ligation. Moreover, they directly demonstrate that the mucin domain regulates TIM-1 signaling.

Regulatory B (Breg) cells have been shown to play a critical role in immune homeostasis and in autoimmunity models. We have recently demonstrated that combined anti-T cell immunoglobulin domain and mucin domain-1 and anti-CD45RB antibody treatment results in tolerance to full MHC-mismatched islet allografts in mice by generating Breg cells that are necessary for tolerance. Breg cells are antigen-specific and are capable of transferring tolerance to untreated, transplanted animals. Here, we demonstrate that adoptively transferred Breg cells require the presence of regulatory T (Treg) cells to establish tolerance, and that adoptive transfer of Breg cells increases the number of Treg cells. Interaction with Breg cells in vivo induces significantly more Foxp3 expression in CD4(+) CD25(-) T cells than with naive B cells. We also show that Breg cells express the TGF-beta associated latency-associated peptide and that Breg-cell mediated graft prolongation post-adoptive transfer is abrogated by neutralization of TGF-beta activity. Breg cells, like Treg cells, demonstrate preferential expression of both C-C chemokine receptor 6 and CXCR3. Collectively, these findings suggest that in this model of antibody-induced transplantation tolerance, Breg cells promote graft survival by promoting Treg-cell development, possibly via TGF-beta production.

Anti-Tim-1 monoclonal antibody (mAb) RMT1-10 is effective in promoting allograft survival through blocking Tim-1. However, its role in corneal transplantation is unclear. This study aims to evaluate the effect of RMT1-10 on high-risk corneal transplantation. BALB/c mice were transplanted with corneal grafts from C57BL/6 mice and intraperitoneally injected with RMT1-10 or isotype IgG. The transparency of corneal graft was evaluated by slit lamp biomicroscopy. Flow cytometry was used to determine the phenotype of CD4(+) T cells, including CD154, Tim-3, CD25 and Foxp3, and to analyze the proliferation capacity of CD4(+) T cells and the suppressive capacity of T regulatory (Treg) cells. The levels of interferon-gamma (IFN-gamma), IL-4 and transforming growth factor-beta1 (TGF-beta1) were investigated by intracellular staining and/or ELISA assay. The delayed-type hypersensitivity (DTH) response was evaluated by ear swelling assay. RMT1-10 therapy delayed the onset of rejection and significantly prolonged the survival of corneal allograft. In RMT1-10 treated mice, percentages of CD4(+)CD154(+) cells and CD4(+)Tim-3(+) cells were significantly decreased while the frequency of CD4(+)CD25(+)Foxp3(+) Treg cells was significantly up-regulated, compared with those of isotype IgG treated mice. And, in vitro proliferation of CD4(+) T cells was significantly inhibited by RMT1-10. In addition, percentage of intracellular expression of IFN-gamma and IL-4 in CD4(+) T cells isolated from RMT1-10 treated mice was significantly reduced. After co-culturing with RMT1-10 in vitro, CD4(+) T cells produced significantly decreased levels of IFN-gamma and IL-4 and significantly increased levels of TGF-beta1. Furthermore, RMT1-10 inhibited DTH response of recipient mice and enhanced the suppressive capacity of Treg cells isolated from RMT1-10 treated mice. Our data indicate that Tim-1 blockade with RMT1-10 could suppress immunological rejection and prolong the survival of corneal allograft through regulating T cell responses.

T cell Ig domain and mucin domain protein 1 (TIM-1) is a costimulatory molecule that regulates immune responses by modulating CD4+ T cell effector differentiation. However, the function of TIM-1 on other immune cell populations is unknown. Here, we show that in vivo in mice, TIM-1 is predominantly expressed on B rather than T cells. Importantly, TIM-1 was expressed by a large majority of IL-10-expressing regulatory B cells in all major B cell subpopulations, including transitional, marginal zone, and follicular B cells, as well as the B cell population characterized as CD1d(hi)CD5+. A low-affinity TIM-1-specific antibody that normally promotes tolerance in mice, actually accelerated (T cell-mediated) immune responsiveness in the absence of B cells. TIM-1+ B cells were highly enriched for IL-4 and IL-10 expression, promoted Th2 responses, and could directly transfer allograft tolerance. Both cytokine expression and number of TIM-1+ regulatory B cells (Bregs) were induced by TIM-1-specific antibody, and this was dependent on IL-4 signaling. Thus, TIM-1 is an inclusive marker for IL-10+ Bregs that can be induced by TIM-1 ligation. These findings suggest that TIM-1 may be a novel therapeutic target for modulating the immune response and provide insight into the signals involved in the generation and induction of Bregs.