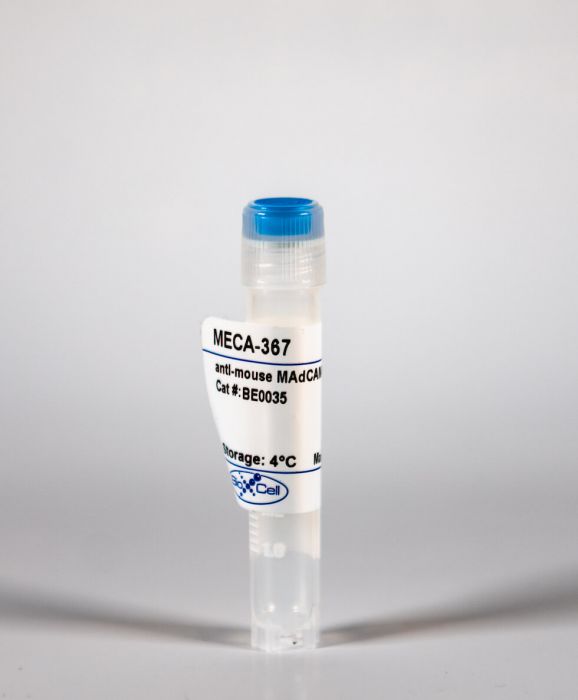 The MECA-367 monoclonal antibody reacts with mouse MAdCAM-1 (mucosal addressin cell adhesion molecule-1) a 50-60 kDa member of the Ig superfamily. MAdCAM-1 is primarily expressed on high endothelial venules in Peyer’s patches, mesenteric lymph nodes and gut lamina propria. MAdCAM-1 interacts with LPAM-1 and CD62L to facilitate lymphocyte tethering, rolling, and homing. The MECA-367 antibody has been shown to block the interaction of MAdCAM-1 with its receptor in vivo and in vitro.

The presence of lymph node (LN)-like vasculature in tumours, characterized by expression of peripheral node addressin and chemokine CCL21, is correlated with T-cell infiltration and positive prognosis in breast cancer and melanoma patients. However, mechanisms controlling the development of LN-like vasculature and how it might contribute to a beneficial outcome for cancer patients are unknown. Here we demonstrate that LN-like vasculature is present in murine models of melanoma and lung carcinoma. It enables infiltration by naive T cells that significantly delay tumour outgrowth after intratumoral activation. Development of this vasculature is controlled by a mechanism involving effector CD8 T cells and NK cells that secrete LTalpha3 and IFNgamma. LN-like vasculature is also associated with organized aggregates of B lymphocytes and gp38(+) fibroblasts, which resemble tertiary lymphoid organs that develop in models of chronic inflammation. These results establish LN-like vasculature as both a consequence of and key contributor to anti-tumour immunity.

Integrin-ligand interactions between germinal center (GC) B cells and Ag-presenting follicular dendritic cells (FDCs) have been suggested to play central roles during GC responses, but their in vivo requirement has not been directly tested. In this study, we show that, whereas integrins alphaLbeta2 and alpha4beta1 are highly expressed and functional on mouse GC B cells, removal of single integrins or their ligands had little effect on B cell participation in the GC response. Combined beta2 integrin deficiency and alpha4 integrin blockade also did not affect the GC response against a particulate Ag. However, the combined integrin deficiency did cause B cells to be outcompeted in splenic GC responses against a soluble protein Ag and in mesenteric lymph node GC responses against gut-derived Ags. Similar findings were made for beta2-deficient B cells in mice lacking VCAM1 on FDCs. The reduced fitness of the GC B cells did not appear to be due to decreased Ag acquisition, proliferation rates, or pAKT levels. In summary, our findings provide evidence that alphaLbeta2 and alpha4beta1 play overlapping and context-dependent roles in supporting interactions with FDCs that can augment the fitness of responding GC B cells. We also find that mouse GC B cells upregulate alphavbeta3 and adhere to vitronectin and milk-fat globule epidermal growth factor VIII protein. Integrin beta3-deficient B cells contributed in a slightly exaggerated manner to GC responses, suggesting this integrin has a regulatory function in GC B cells.

Syngeneic graft vs. host disease (SGVHD) was first described as a graft vs. host disease-like syndrome that developed in rats following syngeneic bone marrow transplantation (BMT) and cyclosporin A (CsA) treatment. SGVHD can be induced by reconstitution of lethally irradiated mice with syngeneic bone marrow cells followed by 21 days of treatment with the immunosuppressive agent CsA. Clinical symptoms of the disease appear 2-3 wk following cessation of CsA therapy, and disease-associated inflammation occurs primarily in the colon and liver. CD4(+) T cells have been shown to play an important role in the inflammatory response observed in the gut of SGVHD mice. Time-course studies revealed a significant increase in migration of CD4(+) T cells into the colon during CsA therapy, as well as significantly elevated mRNA levels of TNF-alpha, proinflammatory chemokines, and cell adhesion molecules in colonic tissue of CsA-treated animals compared with BMT controls, as early as day 14 post-BMT. Homing studies revealed a greater migration of labeled CD4(+) T cells into the gut of CsA-treated mice at day 21 post-BMT than control animals via CsA-induced upregulation of mucosal addressin cell adhesion molecule. This study demonstrates that, during the 21 days of immunosuppressive therapy, functional mechanisms are in place that result in increased homing of CD4(+) T effector cells to colons of CsA-treated mice.