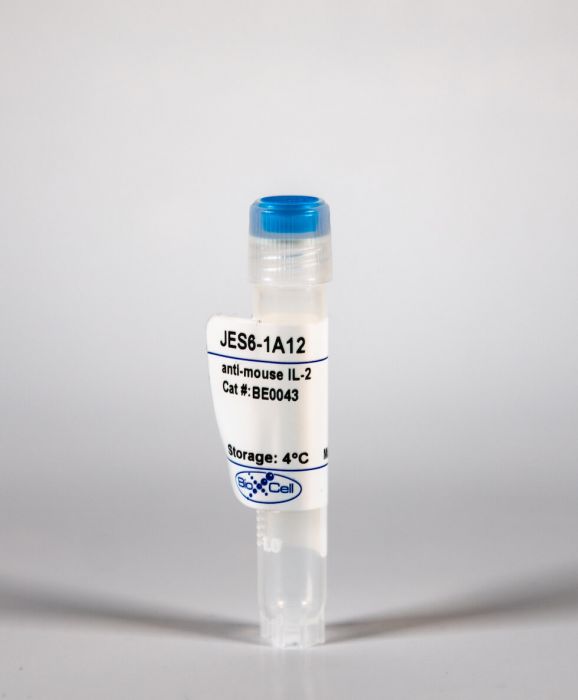 The JES6-1A12 monoclonal antibody reacts with mouse IL-2 a 17 kDa cytokine that is mainly produced by T cells in response to antigenic or mitogenic stimulation. IL-2 is required for T cell proliferation and other activities crucial to the regulation of immunity. The cytokine can also stimulate the growth and differentiation of B cells monocytes/macrophages and NK cells. Additionally IL-2 prevents autoimmune diseases by promoting the differentiation of certain immature T cells into regulatory T cells. The JES6-1A12 antibody has been shown to neutralize IL-2 in vivo .

BACKGROUND: It is well established that effector T cell responses are crucial for the control of most virus infections, but they are often tightly controlled by regulatory T cells (Treg) to minimize immunopathology. NK cells also contribute to virus control but it is not known if their antiviral effect is influenced by virus-induced Tregs as well. We therefore analyzed whether antiretroviral NK cell functions are inhibited by Tregs during an acute Friend retrovirus infection of mice. RESULTS: Selective depletion of Tregs by using the transgenic DEREG mouse model resulted in improved NK cell proliferation, maturation and effector cell differentiation. Suppression of NK cell functions depended on IL-2 consumption by Tregs, which could be overcome by specific NK cell stimulation with an IL-2/anti-IL-2 mAb complex. CONCLUSIONS: The current study demonstrates that virus-induced Tregs indeed inhibit antiviral NK cell responses and describes a targeted immunotherapy that can abrogate the suppression of NK cells by Tregs.

Defining the immune mechanisms underlying protective immunity to helminth infection remains an important challenge. Here we report that lung CD4(+) T cells and Group 2 innate lymphoid cells (ILC2s) work in concert to block Nippostrongylus brasiliensis (Nb) development in the parenchyma within 48 h in mice. Immune-damaged larvae have a striking morphological defect that is dependent on the expansion of IL-13-producing ILC2 and CD4(+) T cells, and the activation of M2 macrophages. This T-cell requirement can be bypassed by administration of IL-2 or IL-33, resulting in expansion of IL-13-producing ILC2s and larval killing. Depletion of ILC2s inhibits larval killing in IL-2-treated mice. Our results broaden understanding of ILC2’s role in immunity to helminths by demonstrating that they not only act as alarmin sensors, but can also be sustained by CD4(+) T cells, ensuring both the prompt activation and the maintenance of IL-13-dependent M2 macrophage immunity in the lung.

The developmental pathways of regulatory T cells (T(reg)) generation in the thymus are not fully understood. In this study, we reconstituted thymic development of Zap70-deficient thymocytes with a tetracycline-inducible Zap70 transgene to allow temporal dissection of T(reg) development. We find that T(reg) develop with distinctive kinetics, first appearing by day 4 among CD4 single-positive (SP) thymocytes. Accepted models of CD25(+)Foxp3(+) T(reg) selection suggest development via CD25(+)Foxp3(-) CD4 SP precursors. In contrast, our kinetic analysis revealed the presence of abundant CD25(-)Foxp3(+) cells that are highly efficient at maturing to CD25(+)Foxp3(+) cells in response to IL-2. CD25(-)Foxp3(+) cells more closely resembled mature T(reg) both with respect to kinetics of development and avidity for self-peptide MHC. These population also exhibited distinct requirements for cytokines during their development. CD25(-)Foxp3(+) cells were IL-15 dependent, whereas generation of CD25(+)Foxp3(+) specifically required IL-2. Finally, we found that IL-2 and IL-15 arose from distinct sources in vivo. IL-15 was of stromal origin, whereas IL-2 was of exclusively from hemopoetic cells that depended on intact CD4 lineage development but not either Ag-experienced or NKT cells.

IL-2, a cytokine with pleiotropic effects, is critical for immune cell activation and peripheral tolerance. Although the therapeutic potential of IL-2 has been previously suggested in autoimmune diseases, the mechanisms whereby IL-2 mitigates autoimmunity and prevents organ damage remain unclear. Using an inducible recombinant adeno-associated virus vector, we investigated the effect of low systemic levels of IL-2 in lupus-prone MRL/Fas(lpr/lpr) (MRL/lpr) mice. Treatment of mice after the onset of disease with IL-2-recombinant adeno-associated virus resulted in reduced mononuclear cell infiltration and pathology of various tissues, including skin, lungs, and kidneys. In parallel, we noted a significant decrease of IL-17-producing CD3(+)CD4(-)CD8(-) double-negative T cells and an increase in CD4(+)CD25(+)Foxp3(+) immunoregulatory T cells (Treg) in the periphery. We also show that IL-2 can drive double-negative (DN) T cell death through an indirect mechanism. Notably, targeted delivery of IL-2 to CD122(+) cytotoxic lymphocytes effectively reduced the number of DN T cells and lymphadenopathy, whereas selective expansion of Treg by IL-2 had no effect on DN T cells. Collectively, our data suggest that administration of IL-2 to lupus-prone mice protects against end-organ damage and suppresses inflammation by dually limiting IL-17-producing DN T cells and expanding Treg.

Friend virus infection of mice induces the expansion and activation of regulatory T cells (Tregs) that dampen acute immune responses and promote the establishment and maintenance of chronic infection. Adoptive transfer experiments and the expression of neuropilin-1 indicate that these cells are predominantly natural Tregs rather than virus-specific conventional CD4(+) T cells that converted into induced Tregs. Analysis of Treg TCR Vbeta chain usage revealed a broadly distributed polyclonal response with a high proportionate expansion of the Vbeta5(+) Treg subset, which is known to be responsive to endogenous retrovirus-encoded superantigens. In contrast to the major population of Tregs, the Vbeta5(+) subset expressed markers of terminally differentiated effector cells, and their expansion was associated with the level of the antiviral CD8(+) T cell response rather than the level of Friend virus infection. Surprisingly, the expansion and accumulation of the Vbeta5(+) Tregs was IL-2 independent but dependent on TNF-alpha. These experiments reveal a subset-specific Treg induction by a new pathway.

BACKGROUND: Lymphopenia results in the proliferation and differentiation of naive T cells into memory-like cells in the apparent absence of antigenic stimulation. This response, at least in part due to a greater availability of cytokines, is thought to promote anti-self responses. Although potentially autoreactive memory-like CD8(+) T cells generated in a lymphopenic environment are subject to the mechanisms of peripheral tolerance, they can induce autoimmunity in the presence of antigen-specific memory-like CD4(+) T helper cells. METHODOLOGY/PRINCIPAL FINDINGS: Here, we studied the mechanisms underlying CD4 help under lymphopenic conditions in transgenic mice expressing a model antigen in the beta cells of the pancreas. Surprisingly, we found that the self-reactivity mediated by the cooperation of memory-like CD8(+) and CD4(+) T cells was not abrogated by CD40L blockade. In contrast, treatment with anti-IL-2 antibodies inhibited the onset of autoimmunity. IL-2 neutralization prevented the CD4-mediated differentiation of memory-like CD8(+) T cells into pathogenic effectors in response to self-antigen cross-presentation. Furthermore, in the absence of helper cells, induction of IL-2 signaling by an IL-2 immune complex was sufficient to promote memory-like CD8(+) T cell self-reactivity. CONCLUSIONS/SIGNIFICANCE: IL-2 mediates the cooperation of memory-like CD4(+) and CD8(+) T cells in the breakdown of cross-tolerance, resulting in effector cytotoxic T lymphocyte differentiation and the induction of autoimmune disease.

The ability of NK cells to rapidly produce IFN-gamma is an important innate mechanism of resistance to many pathogens including Leishmania major. Molecular and cellular components involved in NK cell activation in vivo are still poorly defined, although a central role for dendritic cells has been described. In this study, we demonstrate that Ag-specific CD4(+) T cells are required to initiate NK cell activation early on in draining lymph nodes of L. major-infected mice. We show that early IFN-gamma secretion by NK cells is controlled by IL-2 and IL-12 and is dependent on CD40/CD40L interaction. These findings suggest that newly primed Ag-specific CD4(+) T cells could directly activate NK cells through the secretion of IL-2 but also indirectly through the regulation of IL-12 secretion by dendritic cells. Our results reveal an unappreciated role for Ag-specific CD4(+) T cells in the initiation of NK cell activation in vivo upon L. major infection and demonstrate bidirectional regulations between innate and adaptive immunity.

Natural regulatory T cells (nTregs) that develop in the thymus are essential to limit immune responses and prevent autoimmunity. However, the steps necessary for their thymic development are incompletely understood. The CARMA1/Bcl10/Malt1 (CBM) complex, comprised of adaptors that link the TCR to the transcription factor NF-kappaB, is required for development of regulatory T cells (Tregs) but not conventional T cells. Current models propose that TCR-NF-kappaB is needed in a Treg-extrinsic manner for IL-2 production by conventional T cells or in already precommitted Treg precursors for driving IL-2/STAT5 responsiveness and further maturation into Tregs and/or for promoting cell survival. Using CARMA1-knockout mice, our data show instead that the CBM complex is needed in a Treg-intrinsic rather than -extrinsic manner. Constitutive activity of STAT5 or protection from apoptosis by transgenic expression of Bcl2 in developing Tregs is not sufficient to rescue CARMA1-knockout Treg development. Instead, our results demonstrate that the CBM complex controls an early checkpoint in Treg development by enabling generation of thymic precursors of Tregs. These data suggest a modified model of nTreg development in which TCR-CBM-dependent signals are essential to commit immature thymocytes to the nTreg lineage.