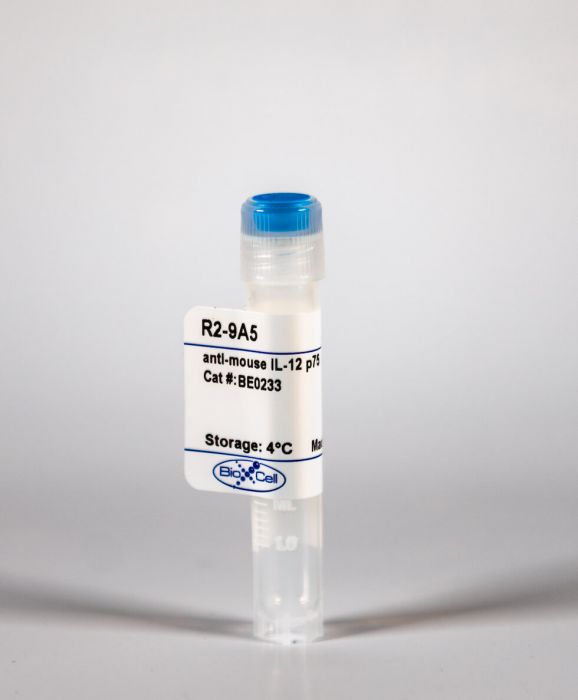 The R2-9A5 monoclonal antibody reacts with mouse interleukin-12 (IL-12), a heterodimeric 75 kDa (p75) cytokine consisting of two covalently linked subunits, 40 kDa (p40) and 35 kDa (p35). IL-12 is secreted by activated monocytes, macrophages, dendritic cells and T cells in response to bacterial pathogens or products such as lipopolysaccharides (LPS). IL-12 is a potent regulator of cell-mediated immune responses and plays a key role in the development of Th1 responses, leading to IFNγ and IL-2 production. The R2-9A5 antibody has been shown to neutralize the biological effects of IL-12 when administered in vivo.

Neutrophils are a component of the tumor microenvironment and have been predominantly associated with cancer progression. Using a genetic approach complemented by adoptive transfer, we found that neutrophils are essential for resistance against primary 3-methylcholantrene-induced carcinogenesis. Neutrophils were essential for the activation of an interferon-gamma-dependent pathway of immune resistance, associated with polarization of a subset of CD4(-) CD8(-) unconventional alphabeta T cells (UTCalphabeta). Bulk and single-cell RNA sequencing (scRNA-seq) analyses unveiled the innate-like features and diversity of UTCalphabeta associated with neutrophil-dependent anti-sarcoma immunity. In selected human tumors, including undifferentiated pleomorphic sarcoma, CSF3R expression, a neutrophil signature and neutrophil infiltration were associated with a type 1 immune response and better clinical outcome. Thus, neutrophils driving UTCalphabeta polarization and type 1 immunity are essential for resistance against murine sarcomas and selected human tumors.

CD8alpha(+) and CD103(+) dendritic cells (DCs) play a central role in the development of type 1 immune responses. However, their role in type 2 immunity remains unclear. We examined this issue using Batf3(-/-) mice, in which both of these DC subsets are missing. We found that Th2 cell responses, and related events such as eosinophilia, alternative macrophage activation, and immunoglobulin class switching to IgG1, were enhanced in Batf3(-/-) mice responding to helminth parasites. This had beneficial or detrimental consequences depending on the context. For example, Batf3 deficiency converted a normally chronic intestinal infection with Heligmosomoides polygyrus into an infection that was rapidly controlled. However, liver fibrosis, an IL-13-mediated pathological consequence of wound healing in chronic schistosomiasis, was exacerbated in Batf3(-/-) mice infected with Schistosoma mansoni. Mechanistically, steady-state production of IL-12 by migratory CD103(+) DCs, independent of signals from commensals or TLR-initiated events, was necessary and sufficient to exert the suppressive effects on Th2 response development. These findings identify a previously unrecognized role for migratory CD103(+) DCs in antagonizing type 2 immune responses.

Blockade of colony-stimulating factor-1 (CSF-1) limits macrophage infiltration and improves response of mammary carcinomas to chemotherapy. Herein we identify interleukin (IL)-10 expression by macrophages as the critical mediator of this phenotype. Infiltrating macrophages were the primary source of IL-10 within tumors, and therapeutic blockade of IL-10 receptor (IL-10R) was equivalent to CSF-1 neutralization in enhancing primary tumor response to paclitaxel and carboplatin. Improved response to chemotherapy was CD8(+) T cell-dependent, but IL-10 did not directly suppress CD8(+) T cells or alter macrophage polarization. Instead, IL-10R blockade increased intratumoral dendritic cell expression of IL-12, which was necessary for improved outcomes. In human breast cancer, expression of IL12A and cytotoxic effector molecules were predictive of pathological complete response rates to paclitaxel.

Minimal requirements for generating effective immunity include the delivery of antigenic (signal 1) and costimulatory (signal 2) signals to T lymphocytes. Recently, a class of third signals, often delivered by antigen-presenting dendritic cells, has been shown to greatly enhance immune responses, especially against tumors. Among signal 3 factors, interleukin (IL)-12 is particularly effective and can be conditionally induced by agonists of Toll-like transmembrane receptors (TLR). In this study, we assessed the therapeutic effect of adjuvant TLR agonist administration upon the capacity of dendritic cell (DC)-tumor electrofusion hybrids to eradicate established MCA205 sarcomas in syngeneic mice. Paired, but not solitary combinations of polyinosine:polycytadilic acid (P[I:C]; TLR3 agonist) and CpG DNA (ODN1826l; TLR9 agonist) stimulated IL-12 secretion from DCs in vitro and synergized with vaccination to achieve potent tumor rejection. Therapeutic effects, however, required coadministration of paired TLR agonists and DC-tumor fusion hybrids. The administration of TLR agonists alone or with fusion vaccine induced transient splenomegaly but without apparent toxicity. The therapeutic effects of this immunization regimen were significantly abrogated through the neutralization of IL-12p70, indicating that production of this third signal was essential to the observed tumor regression. These results show the profound functional consequences of TLR cooperativity and further highlight the critical role of IL-12 in antitumor immunity.

Oral immunization of mice with a Salmonella vaccine expressing colonization factor antigen I (CFA/I) from enterotoxigenic Escherichia coli results in the rapid onset of interleukin-4 (IL-4) and IL-5 production, which explains the observed elevations in mucosal immunoglobulin A (IgA) and serum IgG1 antibodies. In contrast, oral immunization with the Salmonella vector does not result in the production of Th2-type cytokines. To begin to assess why such differences exist between the two strains, it should be noted that in vitro infection of RAW 264.7 macrophages resulted in the absence of nitric oxide (NO) production in cells infected with the Salmonella-CFA/I vaccine. This observation suggests differential proinflammatory cytokine production by these isogenic Salmonella strains. Upon measurement of proinflammatory cytokines, minimal to no tumor necrosis factor alpha (TNF-alpha), IL-1alpha, IL-1beta, or IL-6 was produced by Salmonella-CFA/I-infected RAW 264.7 or peritoneal macrophages, but production was greatly induced in Salmonella vector-infected macrophages. Only minute levels of IL-12 p70 were induced by Salmonella vector-infected macrophages, and none was induced by Salmonella-CFA/I-infected macrophages. The absence of IL-12 was not due to overt increases in production of either IL-12 p40 or IL-10. CFU measurements taken at 8 h postinfection showed no differences in colonization in RAW 264.7 cells infected with either Salmonella construct, but there were differences in peritoneal macrophages. However, after 24 h, the Salmonella vector strain colonized to a greater extent in RAW 264.7 cells than in peritoneal macrophages. Infection of RAW 264.7 cells or peritoneal macrophages with either Salmonella construct showed no difference in macrophage viabilities. This evidence shows that the expression of CFA/I fimbriae alters how macrophages recognize or process salmonellae and prevents the rapid onset of proinflammatory cytokines which is typical during Salmonella infections.