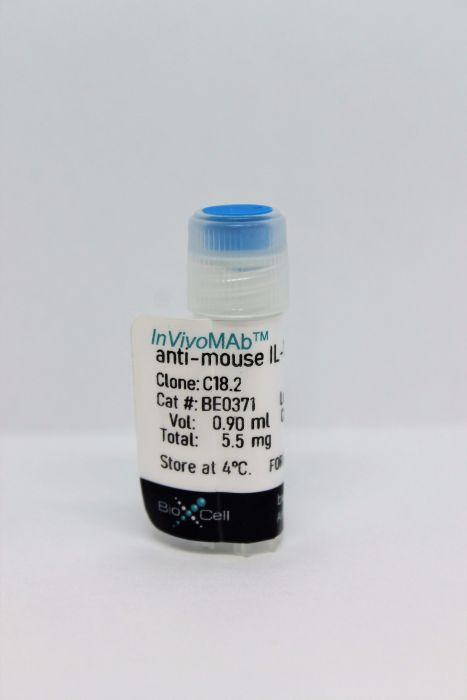 The C18.2 monoclonal antibody reacts with mouse interleukin-12 (IL-12) p35. IL-12 is a heterodimeric 70 kDa cytokine consisting of two covalently linked subunits, 40 kDa (p40) and 35 kDa (p35). IL-12 is secreted by activated monocytes, macrophages, and dendritic cells in response to bacterial pathogens or products such as lipopolysaccharides (LPS). IL-12 is a potent regulator of cell-mediated immune responses and plays a key role in the development of Th1 responses, leading to IFNγ and IL-2 production.

Targeting antigens (Ag) to Fcgamma receptors (FcgammaR) intranasally (i.n.) enhances immunogenicity and protection against intracellular and extracellular pathogens. Specifically, we have demonstrated that targeting fixed (inactivated) Francisella tularensis (iFT) organisms to FcR in mice i.n., with MAb-iFT immune complexes, enhances F. tularensis-specific immune responses and protection against F. tularensis challenge. Furthermore, traditional adjuvant is not required. In addition, we have demonstrated that the increased immunogenicity following the targeting of iFT to FcR is due, in part, to enhanced dendritic cell (DC) maturation, enhanced internalization, and processing and presentation of iFT by DCs, as well as neonatal FcR (FcRn)-enhanced trafficking of iFT from the nasal passage to the nasal mucosa-associated lymphoid tissue (NALT). Using this immunization and challenge model, we expanded on these studies to identify specific in vivo immune responses impacted and enhanced by FcR targeting of iFT i.n. Specifically, the results of this study demonstrate for the first time that targeting iFT to FcR increases the frequency of activated DCs within the lungs of MAb-iFT-immunized mice subsequent to F. tularensis LVS challenge. In addition, the frequency and number of gamma interferon (IFN-gamma)-secreting effector memory (EM) CD4(+) T cells elicited by F. tularensis infection (postimmunization) is increased in an interleukin 12 (IL-12)-dependent manner. In summary, these studies build significantly upon previously published work utilizing this vaccine platform. We have identified a number of additional mechanisms by which this novel, adjuvant-independent, FcR-targeted mucosal vaccine approach enhances immunity and protection against infection, while further validating its potential as a universal vaccine platform against mucosal pathogens.

Bcl-3 is an atypical member of the IkappaB family that modulates transcription in the nucleus via association with p50 (NF-kappaB1) or p52 (NF-kappaB2) homodimers. Despite evidence attesting to the overall physiologic importance of Bcl-3, little is known about its cell-specific functions or mechanisms. Here we demonstrate a T-cell-intrinsic function of Bcl-3 in autoimmunity. Bcl-3-deficient T cells failed to induce disease in T cell transfer-induced colitis and experimental autoimmune encephalomyelitis. The protection against disease correlated with a decrease in Th1 cells that produced the cytokines IFN-gamma and GM-CSF and an increase in Th17 cells. Although differentiation into Th1 cells was not impaired in the absence of Bcl-3, differentiated Th1 cells converted to less-pathogenic Th17-like cells, in part via mechanisms involving expression of the RORgammat transcription factor. Thus, Bcl-3 constrained Th1 cell plasticity and promoted pathogenicity by blocking conversion to Th17-like cells, revealing a unique type of regulation that shapes adaptive immunity.

Regulatory T cells (T(reg)) are believed to suppress conventional T cell (T(conv)) proliferation in vitro in a contact-dependent, cytokine-independent manner, based in part on experiments in which T(reg) and T(conv) are separated by a permeable membrane. We show that the production of IL-35, a novel inhibitory cytokine expressed by natural T(reg), increases substantially following contact with T(conv). Surprisingly, T(reg) were able to mediate potent suppression of T(conv) across a permeable membrane when placed in direct contact with T(conv) in the upper chamber of a Transwell plate. Suppression was IL-35 and IL-10 dependent, and T(conv) activation was required for maximal potentiation of T(reg) suppression. These data suggest that it is the induction of suppression, rather than the function of T(reg) that is obligatorily contact dependent.

Lack of sufficient IL-12 production has been suggested to be one of the basic underlying mechanisms in atopy, but a potential role of IL-12 in established allergic airway disease remains unclear. We took advantage of a mouse model of experimental asthma to study the role of IL-12 during the development of bronchial inflammation. Administration of anti-IL-12p35 or anti-IL-12p40 mAb to previously OVA-sensitized BALB/c mice concomitantly with exposure to nebulized OVA, abolished both the development of bronchial hyperresponsiveness to metacholine as well as the eosinophilia in bronchoalveolar lavage fluid and peripheral blood. Anti-IL-12 treatment reduced CD4(+) T cell numbers and IL-4, IL-5, and IL-13 levels in the bronchoalveolar lavage fluid and the mRNA expression of IL-10, eotaxin, RANTES, MCP-1, and VCAM-1 in the lung. Anti-IL-12p35 treatment failed to show these effects in IFN-gamma knockout mice pointing to the essential role of IFN-gamma in IL-12-induced effects. Neutralization of IL-12 during the sensitization process aggravated the subsequent development of allergic airway inflammation. These data together with recent information on the role of dendritic cells in both the sensitization and effector phase of allergic respiratory diseases demonstrate a dual role of IL-12. Whereas IL-12 counteracts Th2 sensitization, it contributes to full-blown allergic airway disease upon airway allergen exposure in the postsensitization phase, with enhanced recruitment of CD4(+) T cells and eosinophils and with up-regulation of Th2 cytokines, chemokines, and VCAM-1. IFN-gamma-producing cells or cells dependent on IFN-gamma activity, play a major role in this unexpected proinflammatory effect of IL-12 in allergic airway disease.

Macrophages can respond to a variety of infectious and/or inflammatory stimuli by secreting an array of proinflammatory cytokines, the overproduction of which can result in shock or even death. In this report, we demonstrate that ligation of macrophage Fcgamma receptors (FcgammaR) can lead to a reversal of macrophage proinflammatory responses by inducing an upregulation of interleukin (IL)-10, with a reciprocal inhibition of IL-12 production. IL-10 upregulation was specific to FcgammaR ligation, since the ligation of the Mac-1 receptor did not alter IL-10 production. The identification of the specific FcgammaR subtype responsible for IL-10 upregulation was determined in gene knockout mice. Macrophages from mice lacking the FcR gamma chain, which is required for assembly and signaling by FcgammaRI and FcgammaRIII, failed to upregulate IL-10 in response to immune complexes. However, mice lacking either the FcgammaRII or the FcgammaRIII were fully capable of upregulating IL-10 production, implicating FcgammaRI in this process. The biological consequences of FcgammaRI ligation were determined in both in vitro and in vivo models of inflammation and sepsis. In all of the models tested, the ligation of FcgammaR promoted the production of IL-10 and inhibited the secretion of IL-12. This reciprocal alteration in the pattern of macrophage cytokine production illustrates a potentially important role for FcgammaR-mediated clearance in suppressing macrophage proinflammatory responses.