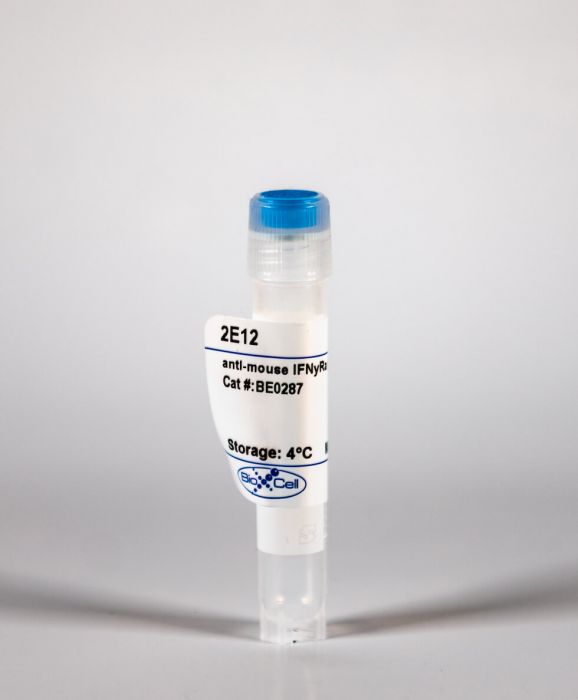 The 2E2 monoclonal antibody reacts with the mouse IFNγR (interferon gamma receptor) α chain also known as CD119 and IFNγ receptor 1. CD119 heterodimerizes with IFNγ receptor 2 (AF-1) to form the IFNγR, a class II cytokine receptor. The IFNγR is expressed ubiquitously on almost all cell types with the exception of mature erythrocytes. The 2E2 antibody is reported as a non-neutralizing antibody; it does not block the binding of IFNγ to the receptor.

B cell dysregulation in aging is thought to mostly occur in conventional B2 cells without affecting innate B1 cells. Elderly humans and mice also accumulate 4-1BBL(+)MHC class-I(Hi)CD86(Hi)B cells of unknown origin. In this article, we report that these cells, termed 4BL cells, are activated murine and possibly human B1a cells. The activation is mediated by aging human monocytes and murine peritoneal macrophages. They induce expression and activation of 4-1BBL and IFN-gammaR1 on B1a cells to subsequently upregulate membrane TNF-alpha and CD86. As a result, activated B1a/4BL cells induce expression of granzyme B in CD8(+)T cells by targeting TNFR2 via membrane TNF-alpha and providing costimulation with CD86. Thus, for the first time, to our knowledge, these results indicate that aging affects the function of B1a cells. Upon aging, these cells lose their tumor-supporting activity and become inducers of potentially antitumor and autoimmune CD8(+)T cells.

Host control of influenza A virus (IAV) is associated with exuberant pulmonary inflammation characterized by the influx of myeloid cells and production of proinflammatory cytokines including interferons (IFNs). It is unclear, however, how the immune system clears the virus without causing lethal immunopathology. Here, we demonstrate that in addition to its known anti-viral activity, STAT1 signaling coordinates host inflammation during IAV infection in mice. This regulatory mechanism is dependent on both type I IFN and IFN-gamma receptor signaling and, importantly, requires the functional interplay between the two pathways. The protective function of type I IFNs is associated with not only the recruitment of classical inflammatory Ly6Chi monocytes into IAV-infected lungs, but also the prevention of excessive monocyte activation by IFN-gamma. Unexpectedly, type I IFNs preferentially regulate IFN-gamma signaling in Ly6Clo rather than inflammatory Ly6Chi mononuclear cell populations. In the absence of type I IFN signaling, Ly6Clo monocytes/macrophages, become phenotypically and functionally more proinflammatory than Ly6Chi cells, revealing an unanticipated function of the Ly6Clo mononuclear cell subset in tissue inflammation. In addition, we show that type I IFNs employ distinct mechanisms to regulate monocyte and neutrophil trafficking. Type I IFN signaling is necessary, but not sufficient, for preventing neutrophil recruitment into the lungs of IAV-infected mice. Instead, the cooperation of type I IFNs and lymphocyte-produced IFN-gamma is required to regulate the tissue neutrophilic response to IAV. Our study demonstrates that IFN interplay links innate and adaptive anti-viral immunity to orchestrate tissue inflammation and reveals an additional level of complexity for IFN-dependent regulatory mechanisms that function to prevent excessive immunopathology while preserving anti-microbial functions.

Mononuclear phagocytes (MPCs) at the tumor site can be divided into subclasses, including monocyte-lineage myeloid-derived suppressor cells (MDSCs) and the immunosuppressive tumor-infiltrating macrophages (TIMs). Cancer growth coincides with the expansion of MDSCs found in the blood, secondary lymphoid organs, and tumor tissue. These MDSCs are thought to mature into macrophages and to promote tumor development by a combination of growth-enhancing properties and suppression of local antitumor immunoresponses. As little is known about either subset of MPCs, we investigated MPCs infiltrating into murine adenocarcinoma MCA38 tumors. We found that these MPCs displayed immunosuppressive characteristics and a MDSC cell-surface phenotype. Over 70% of the MPCs were mature (F4/80(+)Ly6C(-)) macrophages, and the rest were immature (F480(+) Ly6C(+)) monocytes. MPC maturation was inhibited when the cells infiltrated a tumor variant expressing IL-2 and soluble TNF type II receptor (sTNFRII). In addition, the IL-2/sTNFRII MCA38 tumor microenvironment altered the MPC phenotype; these cells did not survive culturing in vitro as a result of Fas-mediated apoptosis and negligible M-CSFR expression. Furthermore, CD4(+) tumor-infiltrating lymphocytes (TILs) in wild-type tumors robustly expressed IL-13, IFN-gamma, and GM-CSF, and CD4(+) TILs in IL-2/sTNFRII-expressing tumors expressed little IL-13. These data suggest that immunotherapy-altered Th cell balance in the tumor microenvironment can affect the differentiation and maturation of MPCs in vivo. Furthermore, as neither the designation MDSC nor TIM can sufficiently describe the status of monocytes/macrophages in this tumor microenvironment, we believe these cells are best designated as MPCs.

Enrichment of immune cells in vivo or in vitro with omega-3 polyunsaturated fatty acid (n-3 PUFA) has been reported to diminish their response to interferon-y (IFN-gamma). We hypothesized that the n-3 PUFA-induced hyporesponsiveness to IFN-gamma is mediated, in part, by a reduction in the number of IFN-gamma receptors (IFNGR) expressed on the surface of these cells. To test this hypothesis, we fed mice experimental diets containing low or high amounts of n-3 PUFA. Thioglycollate-elicited peritoneal macrophages (PEC) were collected and tested for binding and internalization of -labeled recombinant murine IFN-gamma. High n-3 PUFA intake was associated with a significant (n = 2, p < 0.01) reduction in -IFN-gamma binding without affecting binding affinity (Kd). When studies were performed at 37 degrees C, high n-3 PUFA intake reduced internalization of -rmIFN-gamma by 20%-30% (n = 2,p < 0.001). Results from flow cytometric analysis of IFNGR-1 expression on the surface of murine splenocytes were in agreement with the binding studies. Further, total cellular IFNGR-1 from PEC and splenocytes was examined via immunoprecipitation and Western blotting. High n-3 PUFA diet was associated with a 50% decline (n = 3-6, p < 0.05) in total IFNGR-1 in both immune cell populations studied. These data suggest that reduced IFNGR expression may be responsible for immune cell hyporesponsiveness to IFN-gamma, which may, in part, explain some of the immunomodulatory and anti-inflammatory effects associated with the consumption of diets high in n-3 PUFA.

Interferon gamma (IFN-gamma) responsiveness in certain cells depends on the state of cellular differentiation or activation. Here an in vitro developmental system was used to show that IFN-gamma produced during generation of the CD4+ T helper cell type 1 (TH1) subset extinguishes expression of the IFN-gamma receptor beta subunit, resulting in TH1 cells that are unresponsive to IFN-gamma. This beta chain loss also occurred in IFN-gamma-treated TH2 cells and thus represents a specific response of CD4+ T cells to IFN-gamma rather than a TH1-specific differentiation event. These results define a mechanism of cellular desensitization where a cytokine down-regulates expression of a receptor subunit required primarily for signaling and not ligand binding.