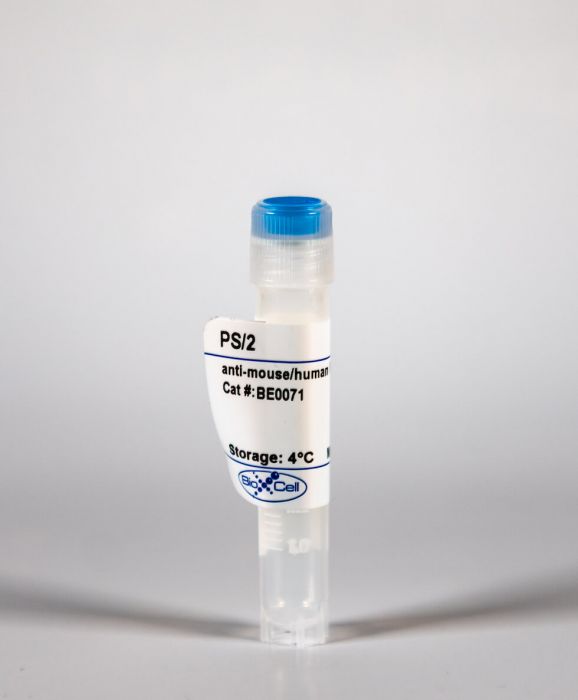 The PS/2 monoclonal antibody reacts with human and mouse VLA-4 α chain also known as CD49d and integrin alpha 4. VLA-4 is a 150 kDa glycoprotein belonging to the integrin family that is expressed by many cell types including T and B lymphocytes, monocytes, eosinophils, basophils, mast cells, thymocytes, NK cells, and dendritic cells. Integrin α4 associates with integrin β7 to form integrin α4β7 also known as LPAM-1 as well as integrin β1 (CD29) to form integrin α4β1 also known as VLA-4. Integrin α4 plays roles in adhesion and T cell co-stimulation. Integrin α4 ligands include VCAM-1, MAdCAM-1, and fibronectin. The PS/2 antibody is useful for in vivo and in vitro VLA-4 neutralization.

Effector CD8(+) T cells (CD8 TE) play a key role during hepatotropic viral infections. Here, we used advanced imaging in mouse models of hepatitis B virus (HBV) pathogenesis to understand the mechanisms whereby these cells home to the liver, recognize antigens, and deploy effector functions. We show that circulating CD8 TE arrest within liver sinusoids by docking onto platelets previously adhered to sinusoidal hyaluronan via CD44. After the initial arrest, CD8 TE actively crawl along liver sinusoids and probe sub-sinusoidal hepatocytes for the presence of antigens by extending cytoplasmic protrusions through endothelial fenestrae. Hepatocellular antigen recognition triggers effector functions in a diapedesis-independent manner and is inhibited by the processes of sinusoidal defenestration and capillarization that characterize liver fibrosis. These findings reveal the dynamic behavior whereby CD8 TE control hepatotropic pathogens and suggest how liver fibrosis might reduce CD8 TE immune surveillance toward infected or transformed hepatocytes.

Selection of the primary antibody repertoire takes place in pro-/pre-B cells, and subsequently in immature and transitional B cells. At the first checkpoint, mu heavy (muH) chains assemble with surrogate light (SL) chain into a precursor B-cell receptor. In mice lacking SL chain, muH chain selection is impaired, and serum autoantibody levels are elevated. However, whether the development of autoantibody-producing cells is due to an inability of the resultant B-cell receptors to induce central and/or peripheral B-cell tolerance or other factors is unknown. Here, we show that receptor editing is defective, and that a higher proportion of BM immature B cells are prone to undergoing apoptosis. Furthermore, transitional B cells are also more prone to undergoing apoptosis, with a stronger selection pressure to enter the follicular B-cell pool. Those that enter the marginal zone (MZ) B-cell pool escape selection and survive, possibly due to the B-lymphopenia and elevated levels of B-cell activating factor. Moreover, the MZ B cells are responsible for the elevated IgM anti-dsDNA antibody levels detected in these mice. Thus, the SL chain is required for central and peripheral B-cell tolerance and inhibits anti-DNA antibody production by MZ B cells.

Integrin-ligand interactions between germinal center (GC) B cells and Ag-presenting follicular dendritic cells (FDCs) have been suggested to play central roles during GC responses, but their in vivo requirement has not been directly tested. In this study, we show that, whereas integrins alphaLbeta2 and alpha4beta1 are highly expressed and functional on mouse GC B cells, removal of single integrins or their ligands had little effect on B cell participation in the GC response. Combined beta2 integrin deficiency and alpha4 integrin blockade also did not affect the GC response against a particulate Ag. However, the combined integrin deficiency did cause B cells to be outcompeted in splenic GC responses against a soluble protein Ag and in mesenteric lymph node GC responses against gut-derived Ags. Similar findings were made for beta2-deficient B cells in mice lacking VCAM1 on FDCs. The reduced fitness of the GC B cells did not appear to be due to decreased Ag acquisition, proliferation rates, or pAKT levels. In summary, our findings provide evidence that alphaLbeta2 and alpha4beta1 play overlapping and context-dependent roles in supporting interactions with FDCs that can augment the fitness of responding GC B cells. We also find that mouse GC B cells upregulate alphavbeta3 and adhere to vitronectin and milk-fat globule epidermal growth factor VIII protein. Integrin beta3-deficient B cells contributed in a slightly exaggerated manner to GC responses, suggesting this integrin has a regulatory function in GC B cells.

The migration of effector or memory T cells to the graft is a critical event in the rejection of transplanted organs. The prevailing view is that the key steps involved in T cell migration – integrin-mediated firm adhesion followed by transendothelial migration – are dependent on the activation of Galphai-coupled chemokine receptors on T cells. In contrast to this view, we demonstrated in vivo that cognate antigen was necessary for the firm adhesion and transendothelial migration of CD8+ effector T cells specific to graft antigens and that both steps occurred independent of Galphai signaling. Presentation of cognate antigen by either graft endothelial cells or bone marrow-derived APCs that extend into the capillary lumen was sufficient for T cell migration. The adhesion and transmigration of antigen-nonspecific (bystander) effector T cells, on the other hand, remained dependent on Galphai, but required the presence of antigen-specific effector T cells. These findings underscore the primary role of cognate antigen presented by either endothelial cells or bone marrow-derived APCs in the migration of T cells across endothelial barriers and have important implications for the prevention and treatment of graft rejection.

Peyer’s patches (PPs) play a central role in supporting B cell responses against intestinal antigens, yet the factors controlling B cell passage through these mucosal lymphoid tissues are incompletely understood. We report that, in mixed chimeras, CXCR4-deficient B cells accumulate in PPs compared with their representation in other lymphoid tissues. CXCR4-deficient B cells egress from PPs more slowly than wild-type cells, whereas CXCR5-deficient cells egress more rapidly. The CXCR4 ligand, CXCL12, is expressed by cells adjacent to lymphatic endothelial cells in a zone that abuts but minimally overlaps with the CXCL13(+) follicle. CXCR4-deficient B cells show reduced localization to these CXCL12(+) perilymphatic zones, whereas CXCR5-deficient B cells preferentially localize in these regions. By photoconverting KikGR-expressing cells within surgically exposed PPs, we provide evidence that naive B cells transit PPs with an approximate residency half-life of 10 h. When CXCR4 is lacking, KikGR(+) B cells show a delay in PP egress. In summary, we identify a CXCL12(hi) perilymphatic zone in PPs that plays a role in overcoming CXCL13-mediated retention to promote B cell egress from these gut-associated lymphoid tissues.

BACKGROUND: Recent evidence suggests that alloreactive memory T cells are generated by the process of heterologous immunity, whereby memory T cells arising in response to pathogen infection crossreact with donor antigens. Because of their diminished requirements for costimulation during recall, these pathogen-elicited allocrossreactive memory T cells are of particular clinical importance, especially given the emergence of costimulatory blockade as a transplant immunosuppression strategy. METHODS: We used an established model of heterologous immunity involving sequential infection of a naive C57BL/6 recipient with lymphocytic choriomeningitis virus and vaccinia virus, followed by combined skin and bone marrow transplant from a BALB/c donor. RESULTS: We demonstrate that coupling the integrin antagonist anti-leukocyte functional antigen (LFA)-1 with costimulatory blockade could surmount the barrier posed by heterologous immunity in a fully allogeneic murine transplant system. The combined costimulatory and integrin blockade regimen suppressed proliferation of alloreactive memory T cells and attenuated their cytokine effector responses. This combined blockade regimen also promoted the retention of FoxP(3)(+) Tregs in draining lymph nodes. Finally, we show that in an in vitro mixed lymphocyte reaction system using human T cells, the combination of belatacept and anti-LFA-1 was able to suppress cytokine production by alloreactive memory T cells that was resistant to belatacept alone. CONCLUSIONS: As an antagonist against human LFA-1 exists and has been used clinically to treat psoriasis, these findings have significant translational potential for future clinical transplant trials.

John, B., et al. (2011). "Analysis of behavior and trafficking of dendritic cells within the brain during toxoplasmic encephalitis" PLoS Pathog 7(9): e1002246. PubMed

Under normal conditions the immune system has limited access to the brain; however, during toxoplasmic encephalitis (TE), large numbers of T cells and APCs accumulate within this site. A combination of real time imaging, transgenic reporter mice, and recombinant parasites allowed a comprehensive analysis of CD11c+ cells during TE. These studies reveal that the CNS CD11c+ cells consist of a mixture of microglia and dendritic cells (DCs) with distinct behavior associated with their ability to interact with parasites or effector T cells. The CNS DCs upregulated several chemokine receptors during TE, but none of these individual receptors tested was required for migration of DCs into the brain. However, this process was pertussis toxin sensitive and dependent on the integrin LFA-1, suggesting that the synergistic effect of signaling through multiple chemokine receptors, possibly leading to changes in the affinity of LFA-1, is involved in the recruitment/retention of DCs to the CNS and thus provides new insights into how the immune system accesses this unique site.

The integrin alpha4beta1 (VLA-4) is used by encephalitogenic T cells to enter the central nervous system (CNS). However, both Th1 and Th17 cells are capable of inducing experimental autoimmune encephalomyelitis (EAE), and the molecular cues mediating the infiltration of Th1 versus Th17 cells into the CNS have not yet been defined. We investigated how blocking of alpha4 integrins affected trafficking of Th1 and Th17 cells into the CNS during EAE. Although antibody-mediated inhibition of alpha4 integrins prevented EAE when MOG(35-55)-specific Th1 cells were adoptively transferred, Th17 cells entered the brain, but not the spinal cord parenchyma, irrespective of alpha4 blockade. Accordingly, T cell-conditional alpha4-deficient mice were not resistant to actively induced EAE but showed an ataxic syndrome with predominantly supraspinal infiltrates of IL-23R(+)CCR6(+)CD4(+) T cells. The entry of alpha4-deficient Th17 cells into the CNS was abolished by blockade of LFA-1 (alphaLbeta2 integrin). Thus, Th1 cells preferentially infiltrate the spinal cord via an alpha4 integrin-mediated mechanism, whereas the entry of Th17 cells into the brain parenchyma occurs in the absence of alpha4 integrins but is dependent on the expression of alphaLbeta2. These observations have implications for the understanding of lesion localization, immunosurveillance, and drug design in multiple sclerosis.