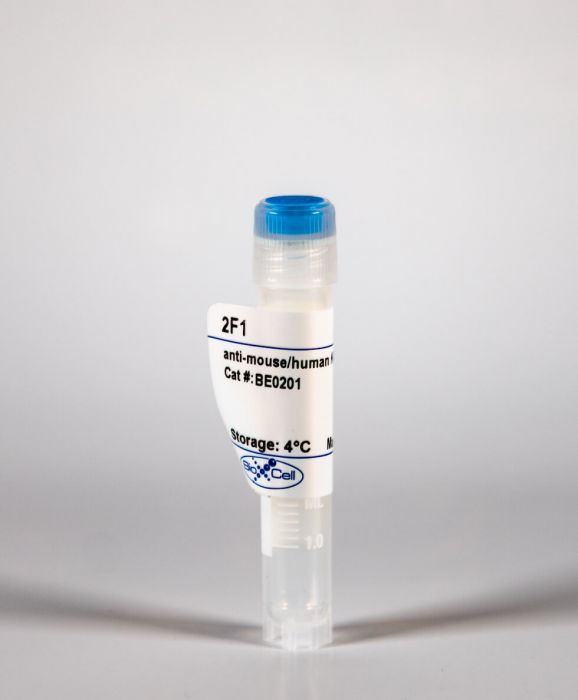 The 2F1 monoclonal antibody reacts with the mouse and human killer cell lectin-like receptor G1 (KLRG1), a type II membrane glycoprotein that exists as a homodimer of glycosylated 30-38 kDa subunits. KLRG1 is preferentially expressed by NK cells but is also expressed by a subset of T cells. Studies in mice suggest that KLRG1 expression is regulated by MHC class I molecules and that KLRG1 regulates the effector function and the development of NK and T cells.

The generation of CD8(+) T cells by vaccination represents an important goal for protective immunity to infectious pathogens. It is thus of utmost importance to understand the mechanisms involved in the generation of optimal CD8(+) T-cell responses. The forkhead box O (FoxO) family of transcription factors has a crucial role in cellular responses to environmental change. Among them, FoxO3 is critically involved in the regulation of cellular proliferation, apoptosis, metabolism and stress resistance to withdrawal of nutrients or cytokine growth factors. Since the role of FoxO3 has been poorly studied in the immune system, here we have evaluated its involvement in the CD8(+) T-cell response. We observe that CD8(+) T cells deficient for FoxO3 undergo a significantly greater primary expansion than their wild-type (WT) counterparts in response to both infectious (vaccinia virus) or non-infectious (non-replicating cellular vaccine) immunogens, resulting in a larger cohort of cells following contraction. These survivors, however, do not undergo a greater secondary response than WT. Taken together, our data show that FoxO3 is a negative regulator of the CD8(+) T-cell response, specifically during the primary expansion.

Regulatory T cells (Treg) are key players in maintaining immune homeostasis but have also been shown to regulate immune responses against infectious pathogens. Therefore, Treg are a promising target for modulating immune responses to vaccines to improve their efficacy. Using a viral vector system, we found that Treg act on the developing immune response early postinfection by reducing the extent of dendritic cell costimulatory molecule expression. Due to this change and the lower IL-2 production that results, a substantial fraction of CD8(+) effector T cells lose CD25 expression several days after activation. Surprisingly, such Treg-dependent limitations in IL-2 signaling by Ag-activated CD8(+) T cells prevent effector differentiation without interfering with memory cell formation. In this way, Treg fine-tune the numbers of effector T cells generated while preserving the capacity for a rapid recall response upon pathogen re-exposure. This selective effect of Treg on a subpopulation of CD8(+) T cells indicates that although manipulation of the Treg compartment might not be optimal for prophylactic vaccinations, it can be potentially exploited to optimize vaccine efficacy for therapeutic interventions.

During many chronic infections, the responding CD8 T cells become exhausted as they progressively lose their ability to elaborate key effector functions. Unlike prototypic memory CD8 cells, which rapidly synthesize IFN-gamma following activation, severely exhausted T cells fail to produce this effector molecule. Nevertheless, the ontogeny of exhausted CD8 T cells, as well as the underlying mechanisms that account for their functional inactivation, remains ill defined. We have used cytokine reporter mice, which mark the transcription of IFN-gamma mRNA by the expression of Thy1.1, to decipher how activation events during the early stages of a chronic infection dictate the development of exhaustion. We show that virus-specific CD8 T cells clearly respond during the early stages of chronic lymphocytic choriomeningitis virus infection, and that this early T cell response is more pronounced than that initially observed in acutely infected hosts. Thus, exhausted CD8 T cells appear to emerge from populations of potently activated precursors. Unlike acute infections, which result in massive expansion of the responding T cells, there is a rapid attenuation of further expansion during chronic infections. The exhausted T cells that subsequently emerge in chronically infected hosts are incapable of producing the IFN-gamma protein. Surprisingly, high levels of the IFN-gamma transcript are still present in exhausted cells, demonstrating that ablation of IFN-gamma production by exhausted cells is not due to transcriptional silencing. Thus, posttranscription regulatory mechanisms likely disable this effector module.