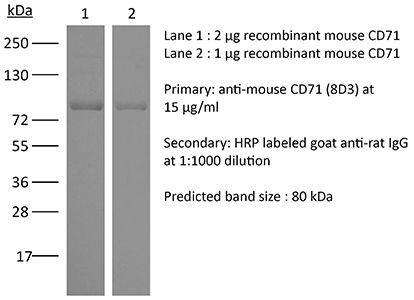 The 8D3 monoclonal antibody reacts with mouse CD71 also known as transferrin receptor protein 1 (TfR1). CD71 is a 170-180 kDa type II homodimeric transmembrane glycoprotein which is expressed on the surface of proliferating cells, reticulocytes, and erythroid precursors. CD71 plays a role in the control of cellular proliferation and is required for iron import from transferrin into cells by endocytosis. CD71 is expressed on malignant cells at high levels and its expression correlates with cancer progression. This high expression on malignant cells along with CD71’s ability to internalize, and the necessity of iron for cancer cell proliferation make the transferrin receptor an attractive target to exploit for the delivery of drugs into malignant cells. The 8D3 antibody has been shown to deplete CD71+ cells in vivo.

Survival of the allogeneic pregnancy depends on the maintenance of immune tolerance to paternal alloantigens at the fetomaternal interface. Multiple localized mechanisms contribute to the fetal evasion from the mother’s immune rejection as the fetus is exposed to a wide range of stimulatory substances such as maternal alloantigens, microbes and amniotic fluids. In this article, we demonstrate that CD71(+) erythroid cells are expanded at the fetomaternal interface and in the periphery during pregnancy in both humans and mice. These cells exhibit immunosuppressive properties, and their abundance is associated with a Th2 skewed immune response, as their depletion results in a proinflammatory immune response at the fetomaternal interface. In addition to their function in suppressing proinflammatory responses in vitro, maternal CD71(+) erythroid cells inhibit an aggressive allogeneic response directed against the fetus such as reduction in TNF-alpha and IFN-gamma production through arginase-2 activity and PD-1/programmed death ligand-1 (PDL-1) interactions. Their depletion leads to the failure of gestation due to the immunological rejection of the fetus. Similarly, fetal liver CD71(+) erythroid cells exhibit immunosuppressive activity. Therefore, immunosuppression mediated by CD71(+) erythroid cells on both sides (mother/fetus) is crucial for fetomaternal tolerance. Thus, our results reveal a previously unappreciated role for CD71(+) erythroid cells in pregnancy and indicate that these cells mediate homeostatic immunosuppressive/immunoregulatory responses during pregnancy.

Infant’s immune system cannot control infection or respond to vaccination as efficiently as older individuals, a phenomenon that has been attributed to immunological immaturity. Recently, we challenged this notion and proposed the presence of actively immunosuppressive and physiologically enriched CD71(+) erythroid cells in neonates. Here we utilized Bordetella pertussis, a common neonatal respiratory tract pathogen, as a proof of concept to investigate the role of these cells in adaptive immunity. We observed that CD71(+) cells have distinctive immunosuppressive properties and prevent recruitment of immune cells to the mucosal site of infection. CD71(+) cells ablation unleashed induction of B. pertussis-specific protective cytokines (IL-17 and IFN-gamma) in the lungs and spleen upon re-infection or vaccination. We also found that CD71(+) cells suppress systemic and mucosal B. pertussis-specific antibody responses. Enhanced antigen-specific adaptive immunity following CD71(+) cells depletion increased resistance of mice to B. pertussis infection. Furthermore, we found that human cord blood CD71(+) cells also suppress T and B cell functions in vitro. Collectively, these data provide important insight into the role of CD71(+) erythroid cells in adaptive immunity. We anticipate our results will spark renewed investigation in modulating the function of these cells to enhance host defense to infections in newborns.

Newborns are highly susceptible to infection. The underlying mechanism of neonatal infection susceptibility has generally been associated with neonatal immune cell immaturity. In this study, we challenged this notion and built upon our recent discovery that neonates are physiologically enriched with erythroid TER119(+)CD71(+) cells (Elahi et al. 2013. Nature 504: 158-162). We have used Bordetella pertussis, a common neonatal respiratory tract infection, as a proof of concept to investigate the role of these cells in newborns. We found that CD71(+) cells have distinctive immune-suppressive properties and suppress innate immune responses against B. pertussis infection. CD71(+) cell ablation unleashed innate immune response and restored resistance to B. pertussis infection. In contrast, adoptive transfer of neonatal CD71(+) cells into adult recipients impaired their innate immune response to B. pertussis infection. Enhanced innate immune response to B. pertussis was characterized by increased production of protective cytokines IFN-gamma, TNF-alpha, and IL-12, as well as recruitment of NK cells, CD11b(+), and CD11c(+) cells in the lung. Neonatal and human cord blood CD71(+) cells express arginase II, and this enzymatic activity inhibits phagocytosis of B. pertussis in vitro. Thus, our study challenges the notion that neonatal infection susceptibility is due to immune cell-intrinsic defects and instead highlights active immune suppression mediated by abundant CD71(+) cells in the newborn. Our findings provide additional support for the novel theme in neonatal immunology that immunosuppression is essential to dampen robust immune responses in the neonate. We anticipate that our results will spark renewed investigation in modulating the function of these cells and developing novel strategies for enhancing host defense to infections in newborns.

Newborn infants are highly susceptible to infection. This defect in host defence has generally been ascribed to the immaturity of neonatal immune cells; however, the degree of hyporesponsiveness is highly variable and depends on the stimulation conditions. These discordant responses illustrate the need for a more unified explanation for why immunity is compromised in neonates. Here we show that physiologically enriched CD71(+) erythroid cells in neonatal mice and human cord blood have distinctive immunosuppressive properties. The production of innate immune protective cytokines by adult cells is diminished after transfer to neonatal mice or after co-culture with neonatal splenocytes. Neonatal CD71(+) cells express the enzyme arginase-2, and arginase activity is essential for the immunosuppressive properties of these cells because molecular inhibition of this enzyme or supplementation with L-arginine overrides immunosuppression. In addition, the ablation of CD71(+) cells in neonatal mice, or the decline in number of these cells as postnatal development progresses parallels the loss of suppression, and restored resistance to the perinatal pathogens Listeria monocytogenes and Escherichia coli. However, CD71(+) cell-mediated susceptibility to infection is counterbalanced by CD71(+) cell-mediated protection against aberrant immune cell activation in the intestine, where colonization with commensal microorganisms occurs swiftly after parturition. Conversely, circumventing such colonization by using antimicrobials or gnotobiotic germ-free mice overrides these protective benefits. Thus, CD71(+) cells quench the excessive inflammation induced by abrupt colonization with commensal microorganisms after parturition. This finding challenges the idea that the susceptibility of neonates to infection reflects immune-cell-intrinsic defects and instead highlights processes that are developmentally more essential and inadvertently mitigate innate immune protection. We anticipate that these results will spark renewed investigation into the need for immunosuppression in neonates, as well as improved strategies for augmenting host defence in this vulnerable population.

A novel monoclonal antibody (mAb), 8D3 (IgG2a), that specifically recognizes the murine transferrin receptor (TfR) was produced by immunizing a Lewis rat with a polyoma middle T oncogene-transformed endothelioma cell line. The 8D3 mAb was obtained by immunohistochemical screening for exclusive staining of vessels forming a blood-brain barrier (BBB), but not of other vessels. The anti-TfR mAb 8D3 recognizes the TfR also in FACS analysis and in western blots and should prove to be useful for affinity purification of the TfR. Whereas 8D3 brightly stains BBB-forming vessels in the central nervous system of mice, it does not stain the fenestrated capillaries within the choroid plexus and the circumventricular organs. In testis, where the blood-tissue barrier is located at the level of the Sertoli cells, the 8D3 mAb specifically stains Sertoli cells but not endothelial cells. Finally, in vitro, 8D3 does not interfere with iron uptake of lymphocytes as it does not influence their proliferation. Taken together, 8D3 represents a versatile new tool to study the tissue distribution of the murine TfR and TfR-mediated transcytosis across tissue barriers in the mouse.