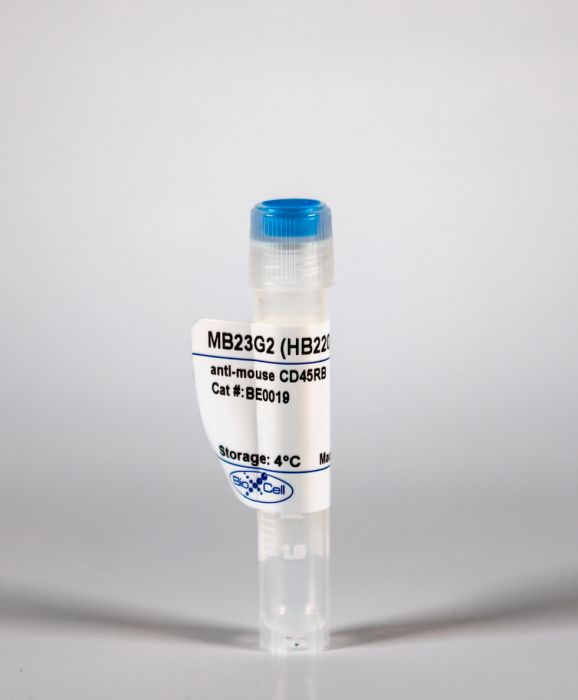 The HB220 antibody reacts with mouse CD45RB a 220 kDa transmembrane protein tyrosine phosphatase expressed on peripheral B cells naëâve T cells thymocytes and weakly on macrophages and dendritic cells. CD45RB is one of 5 isoforms of CD45 which result from alternative splicing of exons 4-6. CD45RB results from exon 5 splicing. CD45RB is critical for intracellular signaling in T cells in response to antigen stimulation as indicated by the severe immunodeficiency observed in CD45-deficient mice. As T cells progress from naëâve to memory cells and become activated CD45RB expression is downregulated. Additionally the intensity of CD45RB expression can be used to differentiate between functionally distinct CD4+ T cell subsets which secrete differing cytokine profiles. The primary ligands for CD45 include galectin-1 CD2 CD3 CD4 and Thy-1.

Five-year survival rates for patients diagnosed with metastatic melanoma are less than 5%. Adoptive cell transfer (ACT) has achieved an objective response of 50% by Response Evaluation Criteria in Solid Tumors (RECIST) in this patient population. For ACT to be maximally effective, the host must first be lymphodepleted. It is hypothesized that lymphodepletion may remove regulatory elements and cytokine sinks, or increase the activation and availability of antigen presenting cells (APCs). We use an in vivo model to study the ACT of tumor-associated antigen (TAA)-specific CD4+ T cells (TRP-1 cells). We have discovered that depletion of NK1.1+ cells enhances the rejection of established melanoma tumors by adoptively transferred TRP-1 CD4+ T cells. NK1.1+ cell depletion increases the number of CD4+ T cells, the serum concentration of pro-inflammatory cytokines, autoimmune vitiligo, host survival and prevented recurrence after ACT. Because multiple cells express NK1.1, we targeted different NK1.1+ cell populations using antibodies specific for NK cells, pre-mNK cells, and innate lymphoid cells (ILCs). Our data suggests that NK1.1+B220+ pre-mNK cells (also known as interferon-producing killer dendritic cells; IKDCs) are an important inhibitor of the CD4+ T cell response to melanoma. Understanding this mechanism may help design new immunotherapies to modulate the activity of pre-mNKs in the face of an antitumor immune response and inhibit their suppression of adoptively transferred T cells.

The strongly immunogenic environment in autoimmune diseases such as lupus may pose a stringent barrier to transplantation. Despite available murine models of lupus, transplant tolerance in this setting has yet to be fully investigated in highly penetrant genetic models of disease. Such studies are of clear clinical importance because lupus is a transplant indication in which transplanted kidneys have a substantially increased risk of rejection including a role for recurrent nephritis. In the fully penetrant B6.SLE123 mouse, we determined that CD4 T follicular helper and germinal center B cells were significantly expanded compared with healthy controls. We traced this expansion to resistance of effector CD4 T and B cells in B6.SLE123 mice to regulation by either CD4 T regulatory cells (CD4Tregs) or CD8 T regulatory cells (CD8Tregs), despite demonstrating normal function by Tregs in this strain. Finally, we determined that B6.SLE123 mice resist anti-CD45RB-mediated tolerance induction to foreign islet allografts, even in the absence of islet autoimmunity. Overall, B6.SLE123 lupus-prone mice are highly resistant to transplant tolerance induction, which provides a new model of failed tolerance in autoimmunity that may elucidate barriers to clinical transplantation in lupus through further cellular and genetic dissection.

Regulatory B (Breg) cells have been shown to play a critical role in immune homeostasis and in autoimmunity models. We have recently demonstrated that combined anti-T cell immunoglobulin domain and mucin domain-1 and anti-CD45RB antibody treatment results in tolerance to full MHC-mismatched islet allografts in mice by generating Breg cells that are necessary for tolerance. Breg cells are antigen-specific and are capable of transferring tolerance to untreated, transplanted animals. Here, we demonstrate that adoptively transferred Breg cells require the presence of regulatory T (Treg) cells to establish tolerance, and that adoptive transfer of Breg cells increases the number of Treg cells. Interaction with Breg cells in vivo induces significantly more Foxp3 expression in CD4(+) CD25(-) T cells than with naive B cells. We also show that Breg cells express the TGF-beta associated latency-associated peptide and that Breg-cell mediated graft prolongation post-adoptive transfer is abrogated by neutralization of TGF-beta activity. Breg cells, like Treg cells, demonstrate preferential expression of both C-C chemokine receptor 6 and CXCR3. Collectively, these findings suggest that in this model of antibody-induced transplantation tolerance, Breg cells promote graft survival by promoting Treg-cell development, possibly via TGF-beta production.

Immunosenescence predisposes the elderly to infectious and autoimmune diseases and impairs the response to vaccination. We recently demonstrated that ageing also impedes development of transplantation tolerance. Unlike their young counterparts (8-12 weeks of age) aged male recipients (greater than 12 months of age) transplanted with a full MHC-mismatched heart are resistant to tolerance mediated by anti-CD45RB antibody. Surprisingly, either chemical or surgical castration restored tolerance induction to levels observed using young recipients. Based on the strong impact of endocrine modulation on transplant tolerance, we explored the impact of ageing and castration on the immune system. Here we report a significant increase in the percentage of T cells that produce interferon-gamma (IFN-gamma) in aged male versus young male animals and that the overall increase in IFN-gamma production was due to an expansion of IFN-gamma-producing memory T cells in aged animals. In contrast to IFN-gamma production, we did not observe differences in IL-10 expression in young versus old male mice. We hypothesized that endocrine modulation would diminish the elevated levels of IFN-gamma production in aged recipients, however, we observed no significant reduction in the percentage of IFN-gamma+ T cells upon castration. Furthermore, we neutralized interferon-gamma by antibody and did not observe an effect on graft survival. We conclude that while elevated levels of interferon-gamma serves as a marker of tolerance resistance in aged mice, other as yet to be identified factors are responsible for its cause. Defining these factors may be relevant to design of tolerogenic strategies for aged recipients.