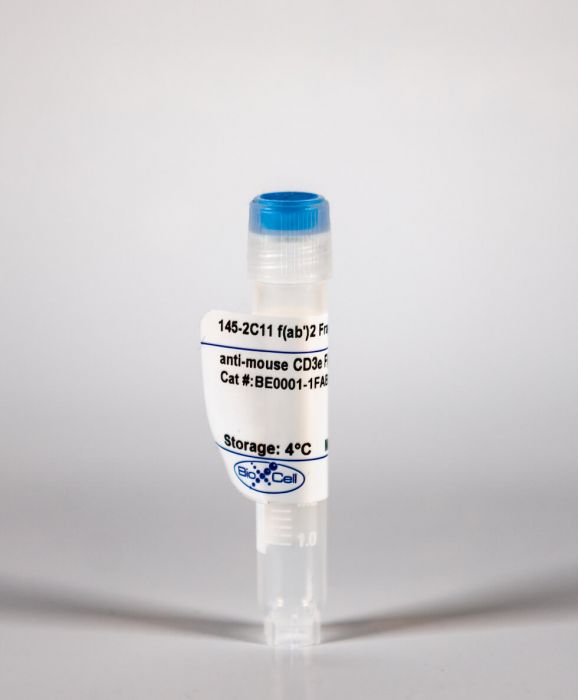 The anti-mouse CD3 F(ab’)2 fragment is the antigen binding F(ab’)2 fragments of the 145-2C11 monoclonal antibody only. The majority of the Fc fragment has been removed via pepsin digestion. The 145-2C11 antibody F(ab’)2 fragment reacts with mouse CD3ε, a 20 kDa transmembrane cell-surface protein that belongs to the immunoglobulin superfamily. CD3ε is one of five polypeptide chains that combine to form the TCR complex. CD3ε is expressed on T lymphocytes, NK-T cells, and to varying degrees on developing thymocytes. CD3 plays roles in TCR signaling, T lymphocyte activation, and antigen recognition. The complete 145-2C11 antibody is commonly used to stimulate T cells in vitro however, when used in vivo activation of resting T cells results in cytokine release and toxicity caused by Ab-mediated cross-linking of T cells and Fcγ receptor-bearing cells. To avoid these complications non-Fc receptor binding F(ab’)2 fragments of the 145-2C11 antibody are commonly used. This non-FcR-binding anti-CD3 induces apoptosis of Ag-activated T cells in vivo by allowing durable expression of the TCR and sustained signaling. Foxp3+ Tregs have been shown to be resistant to CD3 antibody-mediated depletion.

Type 1 diabetes (T1D) is characterized by the immune-mediated destruction of pancreatic beta cells leading to inadequate glycemic control. Trials with immunomodulatory monotherapies have shown that the disease course can in principle be altered. The observed preservation of endogenous insulin secretion however is typically transient and chronic treatment is often associated with significant side effects. Here we combined anti-CD3 with the Hsp60 peptide p277, two drugs that have been evaluated in Phase 3 trials, to test for enhanced efficacy. Female NOD mice with recent onset diabetes were given 5 mug anti-CD3 i.v., on three consecutive days in combination with 100 mug of p277 peptide in IFA s.c., once weekly for four weeks. Anti-CD3 alone restored normoglycemia in 44% of the mice while combination therapy with anti-CD3 and p277 induced stable remission in 83% of mice. The observed increase in protection occurred only in part through TLR2 signaling and was characterized by increased Treg numbers and decreased insulitis. These results have important implications for the design of combination therapies for the treatment of T1D.

BACKGROUND: Accumulating evidence suggests that the balance between pathogenic effector T cells (Teffs) and regulatory T cells (Tregs) may be important for controlling atherosclerotic disease. We hypothesized that a combination therapy with anti-CD3 antibody (CD3-Ab) and IL-2/anti-IL-2 monoclonal antibody complex (IL-2 complex) aimed at increasing the ratio of Tregs to Teffs would effectively inhibit atherosclerosis in mice. METHODS AND RESULTS: We treated apolipoprotein E-deficient mice fed a high-cholesterol diet with vehicle, CD3-Ab, IL-2 complex, or their combination. Mice receiving the combination therapy had markedly reduced atherosclerotic lesions than mice treated with CD3-Ab or IL-2 complex alone. In addition, a striking increase in the Treg/Teff ratio of lymphoid organs and atherosclerotic lesions, along with plaque stabilization characterized by decreased macrophage content and increased collagen content was observed. The combination treatment also markedly reduced splenic Ly6C(high) inflammatory monocytes and might induce a favorable macrophage phenotype change in atherosclerotic lesions. CONCLUSIONS: Our results indicate that in addition to suppressing Teff responses, enhancing Treg-mediated immune responses is more efficacious in preventing atherosclerosis, suggesting a novel therapeutic approach for atherosclerosis.

The activation of T cells is known to be accompanied by the temporary downmodulation of the TCR/CD3 complex on the cell surface. Here, we established a novel monoclonal antibody, Dow2, that temporarily induces downmodulation of the TCR/CD3 complex in mouse CD4(+) T cells without activating T cells. Dow2 recognized the determinant on CD3epsilon; however, differences were observed in the binding mode between Dow2 and the agonistic anti-CD3epsilon Ab, 145-2C11. An injection of Dow2 in vivo resulted in T-cell anergy, and prolonged the survival of cardiac allografts without a marked increase in cytokine release. The phosphorylated forms of the signaling proteins PLC-gamma1 and LAT in Dow2-induced anergic T cells were markedly decreased upon stimulation. However, the levels of phosphorylated LAT and PLCgamma1 in Dow2-induced anergic T cells could be rescued in the presence of the proteasome inhibitor MG-132. These results suggest that proteasome-mediated degradation is involved in hypophosphorylated LAT and PLCgamma1 in Dow2-induced anergic T cells. The novel CD3-specific Ab, Dow2, may provide us with a unique tool for inducing immunosuppression.

We report the results of an independent laboratory’s tests of novel agents to prevent or reverse type 1 diabetes (T1D) in the non-obese diabetic (NOD) mouse, BioBreeding diabetes prone (BBDP) rat, and multiple autoimmune disease prone (MAD) rat models. Methods were developed to better mimic human clinical trials, including: prescreening, randomization, blinding, and improved glycemic care of the animals. Agents were suggested by the research community in an open call for proposals, and selected for testing by an NIDDK appointed independent review panel. Agents selected for testing to prevent diabetes at later stages of progression in a rodent model were a STAT4 antagonist (DT22669), alpha1 anti-trypsin (Aralast NP), celastrol (a natural product with anti-inflammatory properties), and a Macrophage Inflammatory Factor inhibitor (ISO-092). Agents tested for reversal of established T1D in rodent models were: alpha1 anti-trypsin (Aralast NP), tolerogenic peptides (Tregitopes), and a long-acting formulation of GLP-1 (PGC-GLP-1). None of these agents were seen to prevent or reverse type 1 diabetes, while the positive control interventions were effective: anti-CD3 treatment provided disease reversal in the NOD mouse, dexamethasone prevented T1D induction in the MAD rat, and cyclosporin prevented T1D in the BBDP rat. For some tested agents, details of previous formulation, delivery, or dosing, as well as laboratory procedure, availability of reagents and experimental design, could have impacted our ability to confirm prior reports of efficacy in preclinical animal models. In addition, the testing protocols utilized here provided detection of effects in a range commonly used in placebo controlled clinical trials (for example, 50% effect size), and thus may have been underpowered to observe more limited effects. That said, we believe the results compiled here, showing good control and repeatability, confirm the feasibility of screening diverse test agents in an independent laboratory.