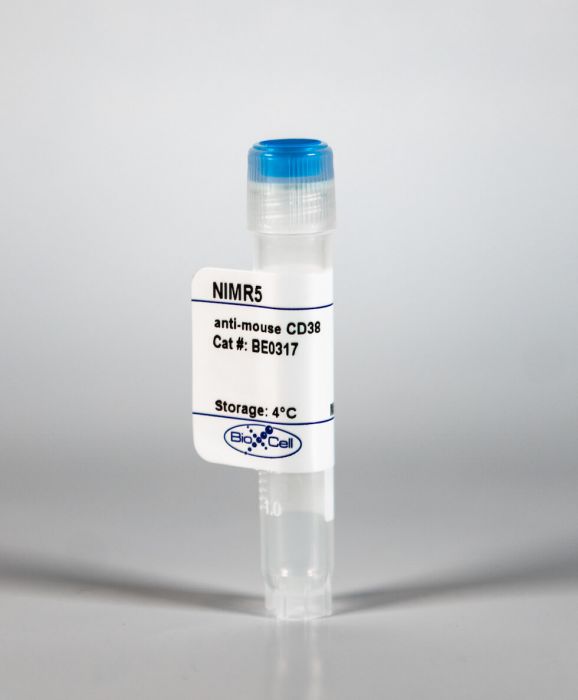 The NIMR5 monoclonal antibody reacts with mouse CD38 a 42 kDa type II transmembrane glycoprotein. CD38 is expressed on immature and mature resting and activated B cells as well as NK cells and a subset of T cells. CD38 expression is down-regulated on mouse germinal center B cells and plasma cells. CD38 is a multifunctional protein involved in NAD homeostasis and in the generation of the second messengers ADPR and cyclic ADPR which are involved in intracellular calcium signaling. Antibodies against CD38 have been shown to be highly efficacious in the treatment of multiple myeloma. The NIMR5 antibody is reported as an agonistic antibody and has been shown to induce B cell proliferation, protect B cells from apoptosis, and slow disease progression in tumor-bearing mice.

Myeloid-derived suppressor cells (MDSC) are an immunosuppressive population of immature myeloid cells found in advanced-stage cancer patients and mouse tumor models. Production of inducible nitric oxide synthase (iNOS) and arginase, as well as other suppressive mechanisms, allows MDSCs to suppress T-cell-mediated tumor clearance and foster tumor progression. Using an unbiased global gene expression approach in conditional p120-catenin knockout mice (L2-cre;p120ctn(f/f)), a model of oral-esophageal cancer, we have identified CD38 as playing a vital role in MDSC biology, previously unknown. CD38 belongs to the ADP-ribosyl cyclase family and possesses both ectoenzyme and receptor functions. It has been described to function in lymphoid and early myeloid cell differentiation, cell activation, and neutrophil chemotaxis. We find that CD38 expression in MDSCs is evident in other mouse tumor models of esophageal carcinogenesis, and CD38(high) MDSCs are more immature than MDSCs lacking CD38 expression, suggesting a potential role for CD38 in the maturation halt found in MDSC populations. CD38(high) MDSCs also possess a greater capacity to suppress activated T cells, and promote tumor growth to a greater degree than CD38(low) MDSCs, likely as a result of increased iNOS production. In addition, we have identified novel tumor-derived factors, specifically IL6, IGFBP3, and CXCL16, which induce CD38 expression by MDSCs ex vivo. Finally, we have detected an expansion of CD38(+) MDSCs in peripheral blood of advanced-stage cancer patients and validated targeting CD38 in vivo as a novel approach to cancer therapy.

Cross-linking of CD38 on hematopoietic cells induces activation, proliferation and differentiation of mature T and B cells and mediates apoptosis of myeloid and lymphoid progenitor cells. In addition to acting as a signaling receptor, CD38 is also an enzyme capable of producing several calcium-mobilizing metabolites, including cyclic adenosine diphosphate ribose (cADPR). It has been previously postulated that the calcium-mobilizing metabolites produced by CD38 may regulate its receptor-based activities. To test this hypothesis, we examined whether the enzyme activity of CD38 controls the apoptosis of an anti-CD38-stimulated leukemic B cell. We show that anti-CD38-induced apoptosis of Ba/F3 cells, a murine pro-B cell line, is not affected by blocking the calcium-mobilizing activity of cADPR or by inhibiting intracellular or extracellular calcium mobilization. In addition, we demonstrate that blocking CD38 enzyme activity with 2′-deoxy-2′-fluoro-nicotinamide arabinoside adenine dinucleotide has no effect on apoptosis and that Ba/F3 cells expressing catalytically inactive mutant forms of CD38 still undergo apoptosis upon CD38 cross-linking. Instead, we find that anti-CD38-induced apoptosis is dependent on tyrosine kinase and caspase activation, and that this process appears to be potentiated by the presence of membrane microdomains. Thus, the receptor-mediated functions of CD38 can be separated from its enzyme activity in a murine leukemic cell line, suggesting that CD38 plays multiple, but independent, biologic roles.

Vitamin A and its active metabolite, all-trans retinoic acid (RA), regulate the antibody response in vivo, although the underlying mechanisms are not well understood. We have investigated the regulation by RA of B cell population dynamics and Ig gene expression in purified splenic mouse B cells stimulated through the B cell antigen receptor (BCR) and/or CD38, a BCR coreceptor. After ligation of the BCR and/or CD38, B cells became more heterogeneous in size. RA substantially restrained this change, concomitant with inhibition of cell proliferation. To examine B cell heterogeneity more closely, we categorized stimulated B cells by size (forward angle light scatter) and determined cell division dynamics, germ-line Ig heavy chain gene transcription and surface IgG1 (sIgG1) expression. Flow cytometric analysis of carboxyfluorescein diacetate succinimidyl ester-labeled B cells costained for sIgG1 showed that the more proliferative groups of B cells were smaller, whereas cells expressing more sIgG1 were larger. RA enriched the latter population, whereas cell division frequency in general and the number of smaller B cells that had undergone division cycles were reduced. Although RA significantly inhibited Ig germ-line transcript levels in the total B cell population, CD19(-)IgG1(+) B cells, which represent a more differentiated phenotype, were enriched. Furthermore, pax-5 mRNA was decreased and activation-induced cytidine deaminase mRNA was increased in RA-treated stimulated B cells. Thus, RA regulated factors known to be required for Ig class switch recombination and modulated the population dynamics of ligation-stimulated B cells, while promoting the progression of a fraction of B cells into differentiated sIgG-expressing cells.

The use of 129 strain-derived embryonic stem cell lines for targeted gene mutation in mice has led directly to an expanded use of this inbred strain worldwide. It has been noted, however, that the 129 genetic background can make a significant contribution to the severity of a mutant phenotype. In this study, we reveal a specific defect in the IL-5 and Rp105 responses of B lymphocytes from two widely used 129 mouse substrains. The response to stimulation through surface IgM is also diminished, although to a lesser degree, in these mice. The lesion appears to reduce significantly the expression of the alpha-chain of the IL-5R, but may also influence events downstream of the IL-5R. This phenotype displays a codominant inheritance pattern, and is accompanied by a variable but significant depression of peritoneal B-1 cell numbers in 50% of the mice.

CD38 has been implicated in the regulation of both proliferation and rescue from apoptosis of B cells. The signalling events associated with CD38-mediated activation of murine B cells are, as yet, not well defined but it is clear that ligation of CD38 by a mitogenic antibody, NIMR-5, induces a calcium influx in resting B cells. Interestingly, however, cross-linking of CD38 does not mobilize intracellular stores of calcium. We now provide a rationale for these findings by demonstrating that CD38 is not coupled to the generation of inositol phosphates in resting B cells. We do, however, show that CD38 ligation stimulates one, or more, protein tyrosine kinase activities which may play a central role in the transduction of CD38-mediated signals leading to B-cell activation.