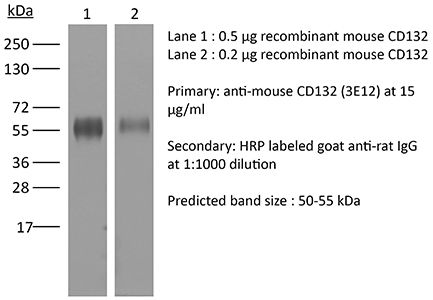 The 3E12 monoclonal antibody reacts with mouse CD132 also known as the common gamma chain and IL-2 receptor gamma chain. CD132 is a 64-70 kDa type I transmembrane glycoprotein belonging to the Ig superfamily. It is expressed by a wide range of cells including T and B lymphocytes, NK cells, monocytes, and granulocytes. CD132 is an essential subunit of the receptor complexes for at least six different interleukin receptors: IL-2, IL-4, IL-7, IL-9, IL-15 and IL-21 receptors. Ligand binding induces tyrosine phosphorylation and initiates signaling through the JAK/STAT pathway. The 3E12 antibody has been reported to block the bioactivity of IL-4, IL-9, and IL-15 and inhibit the ligand/receptor binding of IL-4 and IL-7.

Interleukin (IL)-2 and IL-15 are redundant in stimulating T-cell proliferation in vitro. Their precise role in vivo in governing T-cell expansion and T-cell homeostasis is less clear. Each may have distinct functions and regulate distinct aspects of T-cell activation. The functional receptors for IL-2 and IL-15 consist of a private alpha-chain, which defines the binding specificity for IL-2 or IL-15, and shared IL-2 receptor beta- and gamma-chains. The gamma-chain is also a critical signaling component of IL-4, IL-7 and IL-9 receptors. Thus, the gamma-chain is called the common gamma or gamma-c. As these receptor subunits can be expressed individually or in various combinations resulting in the formation of receptors with different affinities, distinct signaling capabilities or both, we hypothesized that differential expression of IL-2 and IL-15 receptor subunits on cycling T cells in vivo may direct activated T cells to respond to IL-2 or IL-15, thereby regulating the homeostasis of T-cell response in vivo. By observing in vivo T-cell divisions and expression of IL-2 and IL-15 receptor subunits, we demonstrate that IL-15 is a critical growth factor in initiating T cell divisions in vivo, whereas IL-2 limits continued T-cell expansion via downregulation of the gamma-c expression. Decreased gamma-c expression on cycling T cells reduced sustained Bcl-2 expression and rendered cells susceptible to apoptotic cell death. Our study provides data that IL-2 and IL-15 regulate distinct aspects of primary T-cell expansion in vivo.

Mice lacking a functional gamma c subunit of cytokine receptors exhibit profound defects in the development of multiple lymphoid lineages. To investigate the role of gamma c-dependent cytokines in T cell development, the phenotype of developing T cells was compared in interleukin (IL)-7Ralpha-deficient mice and anti-gamma c mAb-treated chimeric mice reconstituted with adult bone marrow cells or subsets of pro-T cells. These studies indicate that gamma c contributes to T cell development at multiple stages of pro-T cell maturation and that IL-7/IL-7R is the primary cytokine for thymic-dependent T cell development. However, our data also implicate other gamma c-dependent cytokines during thymic T cell development. By contrast, substantial intestinal intraepithelial lymphocytes (IEL) development was observed in the intestinal intraepithelium in both types of mice. Analysis of IL-7Ralpha-deficient mice indicates that the IL-7/IL-7R system is critical only for the development of TCR gammadelta+ IEL. However, the inhibitory activity of the anti-deltac mAb in the chimeric mouse model suggests that additional gamma cutilizing cytokines regulate the development of the remaining subsets of IEL.

Cytokines are important regulators of hematopoesis. Mutations in gamma c, which is a subunit shared by the receptors for interleukin (IL) 2, IL-4, and IL-7, have been causally associated with human X chromosome-linked severe combined immunodeficiency disease. This finding indicates a mandatory role for cytokine receptor signaling at one or more stages of lymphocyte development. To evaluate the cellular level at which gamma c is critical for lymphopoiesis, the effect of monoclonal antibodies to gamma c on the capacity of syngeneic bone marrow cells to reconstitute the hematopoietic compartment of lethally irradiated recipient mice was examined. We show that monoclonal antibody to gamma c blocked lymphocyte development at or before the appearance of pro-B cells and prior to or at the seeding of the thymus by precursor cells while erythromyeloid cell development was normal. These results suggest that one level of lymphocyte development that requires gamma c is a point in hematopoietic cell differentiation near the divergence of lymphopoiesis and erythromyelopoesis.

IL-2R, IL-4R, and IL-7R share a common subunit referred to as gamma c and the IL-13R has been proposed to contain gamma c as a subunit. In this report we have used two novel mAbs (3E12 and 4G3) to distinct epitopes of mouse gamma c to determine its lymphoid cell distribution and to examine whether gamma c uses similar epitopes to interact with different cytokines and cytokine receptors. FACS analysis revealed that gamma c is expressed in most lymphocytes, myeloid cells, embryonic thymocytes, and lymphoid cell lines. Results from radiolabeled ligand binding studies, biochemical analysis of ligand-receptor cross-linked complexes, and cytokine bioassays indicate that the epitope defined by mAb 4G3 closely defines the IL-7 binding region of gamma c and overlaps the IL-2 binding region of gamma c. These studies also indicate that gamma c interacts with IL-4 in the context of the IL-4R in a manner that is distinct from its role in the IL-2R and IL-7R and suggest that the 3E12 epitope defines a region of gamma c that intimately interacts with the IL-4R. The B9 plasmacytoma, which proliferates in response to IL-4 and IL-13, was shown to not express gamma c. Thus, at least in some circumstances, gamma c is dispensable for signaling via the IL-4R and is not a required subunit of the IL-13R.