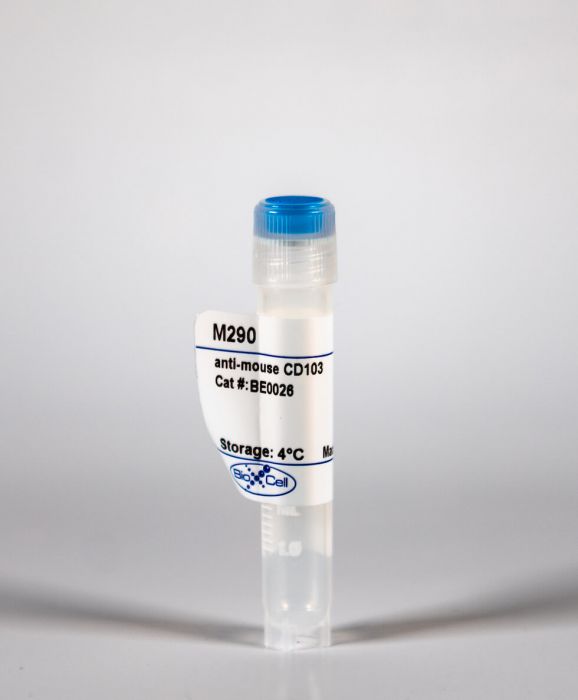 The M290 monoclonal antibody reacts with mouse CD103 also known as integrin αE (ITGAE). CD103 is an integrin protein that binds integrin beta 7 to form the complete heterodimeric integrin molecule αEβ7. CD103 is expressed widely on intraepithelial lymphocyte (IEL) T cells (both αβ T cells and γδ T cells) and on some peripheral regulatory T cells. It has also been reported on lamina propria T cells. A subset of dendritic cells in the gut mucosa and in mesenteric lymph nodes also expresses CD103. The main ligand for CD103 is E-cadherin, an adhesion molecule expressed by epithelial cells. CD103 is thought to facilitate the interactions of T cells with epithelial cells during T cell maturation and effector functions. The M290 antibody is reported to neutralize CD103 in vivo.

The programmed cell death protein 1 (PD-1) limits effector T-cell functions in peripheral tissues, and its inhibition leads to clinical benefit in different cancers. To better understand how PD-1 blockade therapy modulates the tumor-host interactions, we evaluated three syngeneic murine tumor models, the BRAF(V600E)-driven YUMM1.1 and YUMM2.1 melanomas, and the carcinogen-induced murine colon adenocarcinoma MC38. The YUMM cell lines were established from mice with melanocyte-specific BRAF(V600E) mutation and PTEN loss (BRAF(V600E)/PTEN(-/-)). Anti-PD-1 or anti-PD-L1 therapy engendered strong antitumor activity against MC38 and YUMM2.1, but not YUMM1.1. PD-L1 expression did not differ between the three models at baseline or upon interferon stimulation. Whereas mutational load was high in MC38, it was lower in both YUMM models. In YUMM2.1, the antitumor activity of PD-1 blockade had a critical requirement for both CD4 and CD8 T cells, as well as CD28 and CD80/86 costimulation, with an increase in CD11c(+)CD11b(+)MHC-II(high) dendritic cells and tumor-associated macrophages in the tumors after PD-1 blockade. Compared with YUMM1.1, YUMM2.1 exhibited a more inflammatory profile by RNA sequencing analysis, with an increase in expression of chemokine-trafficking genes that are related to immune cell recruitment and T-cell priming. In conclusion, response to PD-1 blockade therapy in tumor models requires CD4 and CD8 T cells and costimulation that is mediated by dendritic cells and macrophages.

CD103 plays an important role in the destruction of islet allografts, and previous studies found that a CD103 immunotoxin (M290-Saporin, or M290-SAP) promoted the long-term survival of pancreatic islet allografts. However, systemic toxicity to the host and the bystander effects of M290-SAP obscure the underlying mechanisms of action and restrict its clinical applications. To overcome these shortcomings, anti-CD103 M290 was conjugated to different cytotoxic agents through cleavable or uncleavable linkages to form three distinct antibody-drug conjugates (ADCs): M290-MC-vc-PAB-MMAE, M290-MC-MMAF, and M290-MCC-DM1. The drug-to-antibody ratio (DAR) and the purity of the ADCs were determined by HIC-HPLC and SEC-HPLC, respectively. The binding characteristics, internalization and cytotoxicity of M290 and the corresponding ADCs were evaluated in vitro. The cell depletion efficacies of the various M290-ADCs against CD103-positive cells were then evaluated in vivo. The M290-ADCs maintained the initial binding affinity for the CD103-positive cell surface antigen and then quickly internalized the CD103-positive cell. Surprisingly, all M290-ADCs potently depleted CD103-positive cells in vivo, with high specificity and reduced toxicity. Our findings show that M290-ADCs have potent and selective depletion effects on CD103-expressing cells in immunocompetent mice. These data indicate that M290-ADCs could potentially serve as a therapeutic intervention to block the CD103/E-cadherin pathway.

Although many human cancers are located in mucosal sites, most cancer vaccines are tested against subcutaneous tumors in preclinical models. We therefore wondered whether mucosa-specific homing instructions to the immune system might influence mucosal tumor outgrowth. We showed that the growth of orthotopic head and neck or lung cancers was inhibited when a cancer vaccine was delivered by the intranasal mucosal route but not the intramuscular route. This antitumor effect was dependent on CD8(+) T cells. Indeed, only intranasal vaccination elicited mucosal-specific CD8(+) T cells expressing the mucosal integrin CD49a. Blockade of CD49a decreased intratumoral CD8(+) T cell infiltration and the efficacy of cancer vaccine on mucosal tumor. We then showed that after intranasal vaccination, dendritic cells from lung parenchyma, but not those from spleen, induced the expression of CD49a on cocultured specific CD8(+) T cells. Tumor-infiltrating lymphocytes from human mucosal lung cancer also expressed CD49a, which supports the relevance and possible extrapolation of these results in humans. We thus identified a link between the route of vaccination and the induction of a mucosal homing program on induced CD8(+) T cells that controlled their trafficking. Immunization route directly affected the efficacy of the cancer vaccine to control mucosal tumors.