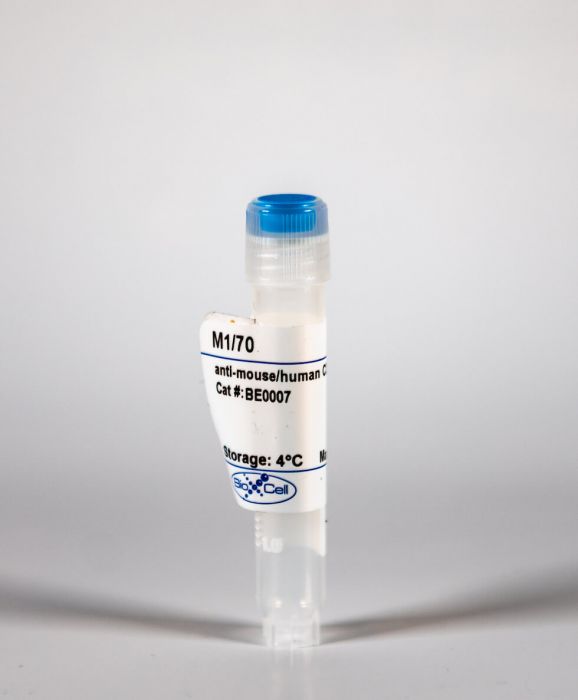 The M1/70 monoclonal antibody reacts with mouse and human CD11b, a 170 kDa membrane glycoprotein also known as integrin alpha M (ITGAM). CD11b belongs to the integrin alpha family and is primarily expressed on granulocytes and monocytes/macrophages but also expressed on dendritic cells, NK cells, and subsets of T and B cells. CD11b and CD18 combine to form Mac-1. Mac-1 functions as a complement receptor as well as a receptor for fibrinogen, factor X, and ICAM1.

Two-photon intravital microscopy has substantially broadened our understanding of tissue- and organ-specific differences in the regulation of inflammatory responses. However, little is known about the dynamic regulation of leukocyte recruitment into inflamed heart tissue, largely due to technical difficulties inherent in imaging moving tissue. Here, we report a method for imaging beating murine hearts using intravital 2-photon microscopy. Using this method, we visualized neutrophil trafficking at baseline and during inflammation. Ischemia reperfusion injury induced by transplantation or transient coronary artery ligation led to recruitment of neutrophils to the heart, their extravasation from coronary veins, and infiltration of the myocardium where they formed large clusters. Grafting hearts containing mutant ICAM-1, a ligand important for neutrophil recruitment, reduced the crawling velocities of neutrophils within vessels, and markedly inhibited their extravasation. Similar impairment was seen with the inhibition of Mac-1, a receptor for ICAM-1. Blockade of LFA-1, another ICAM-1 receptor, prevented neutrophil adherence to endothelium and extravasation in heart grafts. As inflammatory responses in the heart are of great relevance to public health, this imaging approach holds promise for studying cardiac-specific mechanisms of leukocyte recruitment and identifying novel therapeutic targets for treating heart disease.

Despite recent advances in radiotherapy, loco-regional failures are still the leading cause of death in many cancer patients. We have previously reported that bone marrow-derived CD11b(+) myeloid cells are recruited to tumors grown in irradiated tissues, thereby restoring the vasculature and tumor growth. In this study, we examined whether neutralizing CD11b monoclonal antibodies could inhibit the recruitment of myeloid cells into irradiated tumors and inhibit their regrowth. We observed a significant enhancement of antitumor response to radiation in squamous cell carcinoma xenografts in mice when CD11b antibodies are administered systemically. Histological examination of tumors revealed that CD11b antibodies reduced infiltration of myeloid cells expressing S100A8 and matrix metalloproteinase-9. CD11b antibodies further inhibited bone marrow-derived cell adhesion and transmigration to C166 endothelial cell monolayers and chemotactic stimuli, respectively, to levels comparable to those from CD11b knockout or CD18 hypomorphic mice. Given the clinical availability of humanized CD18 antibodies, we tested two murine tumor models in CD18 hypomorphic or CD11b knockout mice and found that tumors were more sensitive to irradiation when grown in CD18 hypomorphic mice but not in CD11b knockout mice. When CD18 hypomorphism was partially rescued by reconstitution with the wild-type bone marrow, the resistance of the tumors to irradiation was restored. Our study thus supports the rationale of using clinically available Mac-1 (CD11b/CD18) antibodies as an adjuvant therapy to radiotherapy.