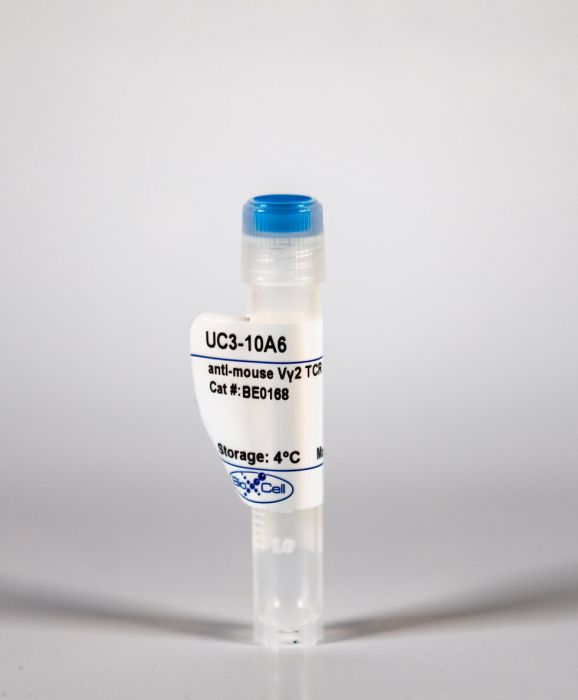 The UC3-10A6 monoclonal antibody reacts with an epitope on the delta chain of the mouse Vγ2 TCR (V gamma 2 T cell receptor). Vγ2 TCR expressing T lymphocytes make up a large proportion of the γδ T cells in late fetal and adult thymus, peripheral lymphoid tissues, lung, intestinal epithelium, and epidermis. The exact function, ligand, and specificity of γδ TCR-expressing T cells are not completely understood. Studies suggest that these cells recognize bacterial ligands and some tumor cells in the context of MHC class I-like gene products and play a role in regulating the immune response during bacterial infection. The UC3-10A6 antibody has been shown to deplete γδ T cells when administered in vivo.

Conventional alphabeta T cells have the ability to form a long-lasting resident memory T-cell (TRM ) population in nonlymphoid tissues after encountering foreign antigen. Conversely, the concept of ‘innate memory’, where the ability of nonadaptive branches of the immune system to deliver a rapid, strengthened immune response upon reinfection or rechallenge, is just emerging. Using the alphabeta T-cell-independent Aldara psoriasis mouse model in combination with genetic fate-mapping and reporter systems, we identified a subset of gammadelta T cells in mice that is capable of establishing a long-lived memory population in the skin. IL-17A/F-producing Vgamma4+ Vdelta4+ T cells populate and persist in the dermis for long periods of time after initial stimulation with Aldara. Experienced Vgamma4+ Vdelta4+ cells show enhanced effector functions and mediate an exacerbated secondary inflammatory response. In addition to identifying a unique feature of gammadelta T cells during inflammation, our results have direct relevance to the human disease as this quasi-innate memory provides a mechanistic insight into relapses and chronification of psoriasis.

HSV-1 infection of the cornea leads to a blinding immunoinflammatory lesion of the eye termed stromal keratitis (SK). Recently, IL-17-producing CD4(+) T cells (Th17 cells) were shown to play a prominent role in many autoimmune conditions, but the role of IL-17 and/or of Th17 cells in virus immunopathology is unclear. In this study, we show that, after HSV infection of the cornea, IL-17 is upregulated in a biphasic manner with an initial peak production around day 2 postinfection and a second wave starting from day 7 postinfection with a steady increase until day 21 postinfection, a time point when clinical lesions are fully evident. Further studies demonstrated that innate cells, particularly gammadelta T cells, were major producers of IL-17 early after HSV infection. However, during the clinical phase of SK, the predominant source of IL-17 was Th17 cells that infiltrated the cornea only after the entry of Th1 cells. By ex vivo stimulation, the half fraction of IFN-gamma-producing CD4(+) T cells (Th1 cells) were HSV specific, whereas very few Th17 cells responded to HSV stimulation. The delayed influx of Th17 cells in the cornea was attributed to the local chemokine and cytokine milieu. Finally, HSV infection of IL-17R knockout mice as well as IL-17 neutralization in wild-type mice showed diminished SK severity. In conclusion, our results show that IL-17 and Th17 cells contribute to the pathogenesis of SK, the most common cause of infectious blindness in the Western world.

Gammadelta T cells are an innate source of interleukin-17 (IL-17), preceding the development of the adaptive T helper 17 (Th17) cell response. Here we show that IL-17-producing T cell receptor gammadelta (TCRgammadelta) T cells share characteristic features with Th17 cells, such as expression of chemokine receptor 6 (CCR6), retinoid orphan receptor (RORgammat), aryl hydrocarbon receptor (AhR), and IL-23 receptor. AhR expression in gammadelta T cells was essential for the production of IL-22 but not for optimal IL-17 production. In contrast to Th17 cells, CCR6(+)IL-17-producing gammadelta T cells, but not other gammadelta T cells, express Toll-like receptors TLR1 and TLR2, as well as dectin-1, but not TLR4 and could directly interact with certain pathogens. This process was amplified by IL-23 and resulted in expansion, increased IL-17 production, and recruitment of neutrophils. Thus, innate receptor expression linked with IL-17 production characterizes TCRgammadelta T cells as an efficient first line of defense that can orchestrate an inflammatory response to pathogen-derived as well as environmental signals long before Th17 cells have sensed bacterial invasion.

Murine gammadelta T cell subsets, defined by their Vgamma chain usage, have been shown in various disease models to have distinct functional roles. In this study, we examined the responses of the two main peripheral gammadelta T cell subsets, Vgamma1(+) and Vgamma4(+) cells, during collagen-induced arthritis (CIA), a mouse model that shares many hallmarks with human rheumatoid arthritis. We found that whereas both subsets increased in number, only the Vgamma4(+) cells became activated. Surprisingly, these Vgamma4(+) cells appeared to be Ag selected, based on preferential Vgamma4/Vdelta4 pairing and very limited TCR junctions. Furthermore, in both the draining lymph node and the joints, the vast majority of the Vgamma4/Vdelta4(+) cells produced IL-17, a cytokine that appears to be key in the development of CIA. In fact, the number of IL-17-producing Vgamma4(+) gammadelta T cells in the draining lymph nodes was found to be equivalent to the number of CD4(+)alphabeta(+) Th-17 cells. When mice were depleted of Vgamma4(+) cells, clinical disease scores were significantly reduced and the incidence of disease was lowered. A decrease in total IgG and IgG2a anti-collagen Abs was also seen. These results suggest that Vgamma4/Vdelta4(+) gammadelta T cells exacerbate CIA through their production of IL-17.