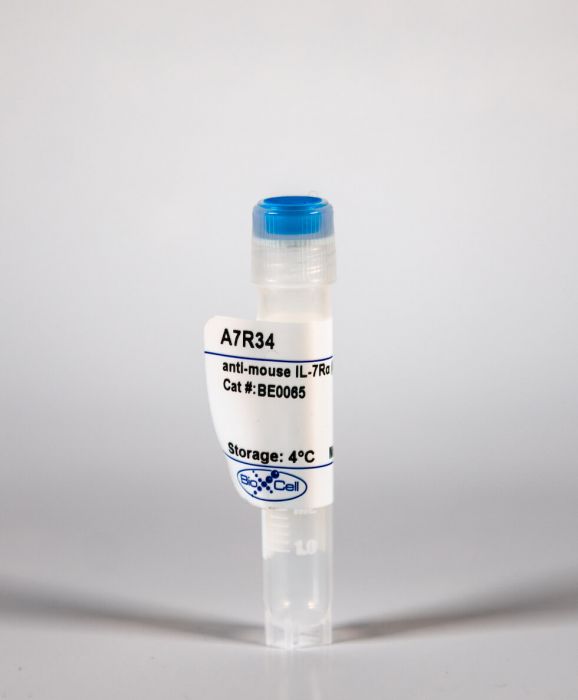 The A7R34 monoclonal antibody reacts with mouse IL-7Rα also known as CD127. IL-7Rα is a 60-90 kDa type I transmembrane glycoprotein expressed on immature B cells, thymocytes, peripheral T cells, and bone marrow stromal cells. IL-7Rα forms a heterodimer with the common γ chain (γc or CD132) and upon ligation of IL-7 plays important roles in T and B cell development, and T cell homeostasis. Thymic Stromal Lymphopoietin (TSLP) also binds to IL-7Rα as a complex with the TSLPR chain to trigger activation of dendritic cells, and is also involved in B cell development, allergy and autoimmunity. The A7R34 antibody has been shown to block IL-7Rα signaling when administered in vivo.

Early T-cell precursor leukaemia (ETP-ALL) is a high-risk subtype of human leukaemia that is poorly understood at the molecular level. Here we report translocations targeting the zinc finger E-box-binding transcription factor ZEB2 as a recurrent genetic lesion in immature/ETP-ALL. Using a conditional gain-of-function mouse model, we demonstrate that sustained Zeb2 expression initiates T-cell leukaemia. Moreover, Zeb2-driven mouse leukaemia exhibit some features of the human immature/ETP-ALL gene expression signature, as well as an enhanced leukaemia-initiation potential and activated Janus kinase (JAK)/signal transducers and activators of transcription (STAT) signalling through transcriptional activation of IL7R. This study reveals ZEB2 as an oncogene in the biology of immature/ETP-ALL and paves the way towards pre-clinical studies of novel compounds for the treatment of this aggressive subtype of human T-ALL using our Zeb2-driven mouse model.

HIV infection and the associated chronic immune activation alter T cell homeostasis leading to CD4 T cell depletion and CD8 T cell expansion. The mechanisms behind these outcomes are not totally defined and only partially explained by the direct cytopathic effect of the virus. In this manuscript, we addressed the impact of lymphopenia and chronic exposure to IFN-alpha on T cell homeostasis. In a lymphopenic murine model, this interaction led to decreased CD4 counts and CD8 T cell expansion in association with an increase in the Signal Transducer and Activator of Transcription 1 (STAT1) levels resulting in enhanced CD4 T cell responsiveness to IFN-alpha. Thus, in the setting of HIV infection, chronic stimulation of this pathway could be detrimental for CD4 T cell homeostasis.

Quantitative variations in CTLA4 expression, because of genetic polymorphisms, are associated with various human autoimmune conditions, including type 1 diabetes (T1D). Extensive studies have demonstrated that CTLA4 is not only essential for the suppressive role of regulatory T cells (T(reg)) but also required for intrinsic control of conventional T (T(conv)) cells. We report that a modest insufficiency of CTLA4 in mice, which mimics the effect of some human CTLA4 genetic polymorphisms, accompanied by a T1D-permissive MHC locus, was sufficient to induce juvenile-onset diabetes on an otherwise T1D-resistant genetic background. Reduction in CTLA4 levels had an unanticipated effect in promoting Treg function both in vivo and in vitro. It led to an increase in T(reg) memory in both lymphoid and nonlymphoid target tissue. Conversely, modulating CTLA4 by either RNA interference or Ab blockade promoted conventional effector memory T cell formation in the T(conv) compartment. The CD4(+) conventional effector memory T cells, including those within target tissue, produced IL-17 or IFN-gamma. Blocking IL-7 signaling reduced the Th17 autoimmune compartment but did not suppress the T1D induced by CTLA4 insufficiency. Enhanced effector memory formation in both T(conv) and T(reg) lineages may underpin the apparently dichotomized impact of CTLA4 insufficiency on autoimmune pathogenesis. Therefore, although the presence of CTLA4 plays a critical role in controlling homeostasis of T cells, its quantitative variation may impose diverse or even opposing effects on distinct lineages of T cells, an optimal sum of which is necessary for preservation of T cell immunity while suppressing tissue damage.

Thymic Foxp3-expressing regulatory T cells are activated by peripheral self-antigen to increase their suppressive function, and a fraction of these cells survive as memory regulatory T cells (mTregs). mTregs persist in nonlymphoid tissue after cessation of Ag expression and have enhanced capacity to suppress tissue-specific autoimmunity. In this study, we show that murine mTregs express specific effector memory T cell markers and localize preferentially to hair follicles in skin. Memory Tregs express high levels of both IL-2Ralpha and IL-7Ralpha. Using a genetic-deletion approach, we show that IL-2 is required to generate mTregs from naive CD4(+) T cell precursors in vivo. However, IL-2 is not required to maintain these cells in the skin and skin-draining lymph nodes. Conversely, IL-7 is essential for maintaining mTregs in skin in the steady state. These results elucidate the fundamental biology of mTregs and show that IL-7 plays an important role in their survival in skin.

A mutation in the IL7Ralpha locus has been identified as a risk factor for multiple sclerosis (MS), a neurodegenerative autoimmune disease characterized by inflammation, demyelination, and axonal damage. IL7Ralpha has well documented roles in lymphocyte development and homeostasis, but its involvement in disease is largely understudied. In this study, we use the experimental autoimmune encephalomyelitis (EAE) model of MS to show that a less severe form of the disease results when IL7Ralpha expression is largely restricted to thymic tissue in IL7RTg(IL7R-/-) mice. Compared with wild-type (WT) mice, IL7RTg(IL7R-/-) mice exhibited reduced paralysis and myelin damage that correlated with dampened effector responses, namely decreased TNF production. Furthermore, treatment of diseased WT mice with neutralizing anti-IL7Ralpha Ab also resulted in significant improvement of EAE. In addition, chimeric mice were generated by bone marrow transplant to limit expression of IL7Ralpha to cells of either hematopoietic or nonhematopoietic origin. Mice lacking IL7Ralpha only on hematopoietic cells develop severe EAE, suggesting that IL7Ralpha expression in the nonhematopoietic compartment contributes to disease. Moreover, novel IL7Ralpha expression was identified on astrocytes and oligodendrocytes endogenous to the CNS. Chimeric mice that lack IL7Ralpha only on nonhematopoietic cells also develop severe EAE, which further supports the role of IL7Ralpha in T cell effector function. Conversely, mice that lack IL7Ralpha throughout both compartments are dramatically protected from disease. Taken together, these data indicate that multiple cell types use IL7Ralpha signaling in the development of EAE, and inhibition of this pathway should be considered as a new therapeutic avenue for MS.

Defense against attaching-and-effacing bacteria requires the sequential generation of interleukin 23 (IL-23) and IL-22 to induce protective mucosal responses. Although CD4(+) and NKp46(+) innate lymphoid cells (ILCs) are the critical source of IL-22 during infection, the precise source of IL-23 is unclear. We used genetic techniques to deplete mice of specific subsets of classical dendritic cells (cDCs) and analyzed immunity to the attaching-and-effacing pathogen Citrobacter rodentium. We found that the signaling receptor Notch2 controlled the terminal stage of cDC differentiation. Notch2-dependent intestinal CD11b(+) cDCs were an obligate source of IL-23 required for survival after infection with C. rodentium, but CD103(+) cDCs dependent on the transcription factor Batf3 were not. Our results demonstrate a nonredundant function for CD11b(+) cDCs in the response to pathogens in vivo.