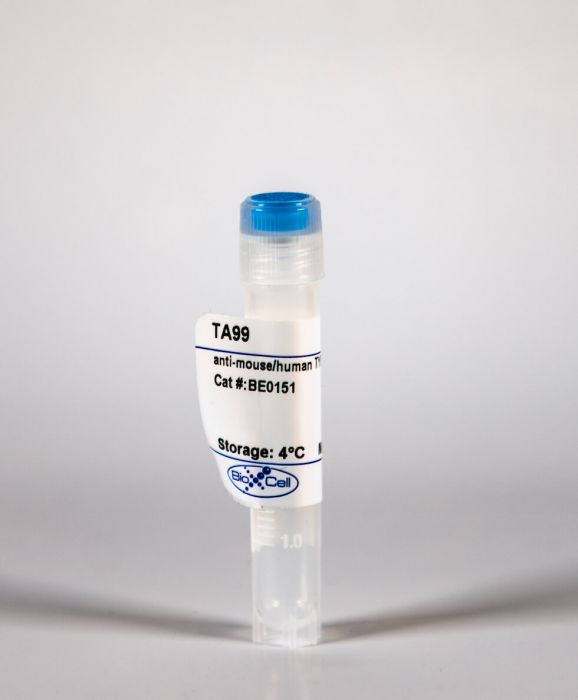 The TA99 monoclonal antibody reacts with human and mouse tyrosinase-related protein 1 (TYRP1) also known as glycoprotein 75 (gp75) and MEL-5. TYRP1 is a melanocyte-specific enzyme involved in melanin synthesis as well as the proliferation and cell death of melanocytes. TYRP1 is critical for skin, eye, and hair pigmentation.

in vivo triggering of FcγRs

Despite recent advances in activating immune cells to target tumors, the presence of some immune cells, such as tumor-associated macrophages (TAMs) or tumor-associated neutrophils (TANs), may promote rather than inhibit tumor growth. However, it remains unclear how antibody-dependent tumor immunotherapies, such as cytotoxic or checkpoint control antibodies, affect different TAM or TAN populations, which abundantly express activating Fc gamma receptors. In this study, we show that the tissue environment determines which cellular effector pathways are responsible for antibody-dependent tumor immunotherapy. Although TAMs derived from Ly6C high monocytes recruited by the CCL2-CCR2 axis were critical for tumor immunotherapy of skin tumors, the destruction of lung tumors was CCL2-independent and required the presence of colony-stimulating factor 2–dependent tissue-resident macrophages. Our findings suggest that TAMs may have a dual role not only in promoting tumor growth in certain tissue environments on the one hand but also in contributing to tumor cell destruction during antibody-mediated immunotherapy on the other hand. DOI: 10.1126/sciimmunol.aah6413

Hermansky-Pudlak syndrome (HPS) is a group of disorders characterized by the malformation of lysosome-related organelles, such as pigment cell melanosomes. Three of nine characterized HPS subtypes result from mutations in subunits of BLOC-2, a protein complex with no known molecular function. In this paper, we exploit melanocytes from mouse HPS models to place BLOC-2 within a cargo transport pathway from recycling endosomal domains to maturing melanosomes. In BLOC-2-deficient melanocytes, the melanosomal protein TYRP1 was largely depleted from pigment granules and underwent accelerated recycling from endosomes to the plasma membrane and to the Golgi. By live-cell imaging, recycling endosomal tubules of wild-type melanocytes made frequent and prolonged contacts with maturing melanosomes; in contrast, tubules from BLOC-2-deficient cells were shorter in length and made fewer, more transient contacts with melanosomes. These results support a model in which BLOC-2 functions to direct recycling endosomal tubular transport intermediates to maturing melanosomes and thereby promote cargo delivery and optimal pigmentation.

To study cutaneous pigmentation in a physiological context, we have previously developed a functional pigmented reconstructed skin model composed of a melanocyte-containing epidermis grown on a dermal equivalent comprising living fibroblasts. The present studies, using the same model, aimed to demonstrate that dermal fibroblasts influence skin pigmentation up to the macroscopic level. The proof of principle was performed with pigmented skins differing only in the fibroblast component. First, the in vitro system was reconstructed with or without fibroblasts in order to test the global influence of the presence of this cell type. We then assessed the impact of the origin of the fibroblast strain on the degree of pigmentation using fetal versus adult fibroblasts. In both experiments, impressive variation in skin pigmentation at the macroscopic level was observed and confirmed by quantitative parameters related to skin color, melanin content and melanocyte numbers. These data confirmed the responsiveness of the model and demonstrated that dermal fibroblasts do indeed impact the degree of skin pigmentation. We then hypothesized that a physiological state associated with pigmentary alterations such as photo-aging could be linked to dermal fibroblasts modifications that accumulate over time. Pigmentation of skin reconstructed using young unexposed fibroblasts (n = 3) was compared to that of tissues containing natural photo-aged fibroblasts (n = 3) which express a senescent phenotype. A stimulation of pigmentation in the presence of the natural photo-aged fibroblasts was revealed by a significant increase in the skin color (decrease in Luminance) and an increase in both epidermal melanin content and melanogenic gene expression, thus confirming our hypothesis. Altogether, these data demonstrate that the level of pigmentation of the skin model is influenced by dermal fibroblasts and that natural photo-aged fibroblasts can contribute to the hyperpigmentation that is associated with photo-aging.

in vivo triggering of FcγRs

mAbs binding to tumor-associated surface Ags are therapeutically applied in a range of malignancies. Therapeutic vaccination only recently met with clinical success, and the first cancer vaccine received U.S. Food and Drug Administration approval last year. To improve current protocols, we combined peptide vaccines with mAb to the tyrosinase-related protein (TRP)-1 surface Ag for the treatment of B16F10 skin melanoma. Vaccine formulations with synthetic long peptides failed to elicit strong CD8 T cell responses to self-differentiation Ags gp100 and TRP-2, whereas altered peptide sequences recruited gp100-specific CD8 T cells from the endogenous repertoire with frequencies of 40%. However, these high frequencies were reached too late; large, progressively growing melanomas had already emerged. Addition of the TRP-1-directed mAb TA99 to the treatment protocol mediated eradication of s.c. lesions. The mode of action of the Ab did not depend on complement factor C3 and did not lead to improved Ag presentation and CD8 T cell immunity; rather, it recruited FcgammaR-bearing innate immune cells during early tumor control, thereby creating a window of time for the generation of protective cellular immunity. These data support the concept of combination therapy, in which passive transfer of mAbs is supplemented with cancer peptide vaccines. Moreover, we advocate that tumor Ag-specific T cell immunity directed against self-proteins can be exploited from the endogenous repertoire.