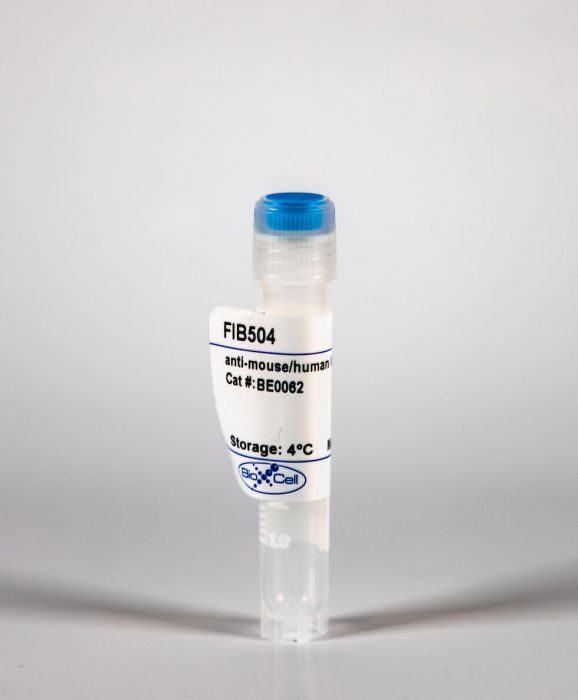 The FIB504 monoclonal antibody reacts with human and mouse Integrin beta 7 which is a 130 kDa glycoprotein belonging to the Ig superfamily. Integrin β7 associates with integrin α4 (CD49d) to form integrin α4β7 also known as LPAM-1 as well as integrin αE (CD103) to form integrin αEβ7. Integrin α4β7 signals when bound to its ligands VCAM-1 (CD106), MAdCAM-1 and fibronectin, while integrin αEβ7 binds to E-cadherin (CD324). Integrin α4β7 is expressed by peripheral lymphocytes, small subsets of thymocytes, and bone marrow progenitors while integrin αEβ7 is expressed on intestinal intraepithelial lymphocytes, T regulatory cells, and a subset of CD8+ T cells in the lamina propria and lymph nodes. Integrin β7 plays roles in the adhesion of immune cells to endothelial cells thereby mediating cell migration and homing during an inflammatory response. The FIB504 antibody has been shown to have blocking activity.

BACKGROUND: Immune checkpoint inhibitor (ICPI) can augment the anti-tumour response by blocking negative immunoregulators with monoclonal antibodies. The anti-cytotoxic T lymphocyte-associated antigen-4 (CTLA-4) antibody is the first ICPI which has shown remarkable benefits in the clinical treatment of cancers. However, the increased activity of the immune system also causes some side effects called immune-related adverse events (irAEs). Colitis is one of the most common irAEs related to anti-CTLA-4 immunotherapy. RESULTS: We identified that CD4(+) T cells were the primary responders in CTLA-4 blockade and that the expansion of gut-homing CD4(+) T cells by anti-CTLA-4 therapy was independent of CD103. We used dextran sulfate sodium (DSS)-induced colitis mice as our model and tested the possibility of using a trafficking-blocking antibody to treat anti-CTLA-4 antibody-induced irAEs. We found that blocking T cell homing increased colitis severity in the context of CTLA-4 blockade and that gut-trafficking blockade had different effects on different Th subsets and could facilitate the proliferation of Th17 cells in the lamina propria (LP). CONCLUSIONS: Our data reveals the fundamental mechanism underlying trafficking-blocking antibody therapy for CTLA-4 blockade-induced colitis and provide a caution in regard to apply trafficking-blocking antibody treatment under CTLA-4 blockade condition.

in vivo blocking of Integrin β7

Rheumatoid arthritis is an autoimmune disorder that affects the joints and other organs. Pulmonary complications contribute significantly to rheumatoid arthritis mortality. Retinoic acid and its synthetic compound AM80 play roles in immunoregulation but their effect on mucosal autoimmunity remains largely unknown. T follicular helper (Tfh) and Th17 cells are known to promote inflammation and autoantibody production. Using the K/BxN autoimmune arthritis model, we elucidate a novel mechanism whereby oral AM80 administration suppressed lung mucosa-associated Tfh and autoantibody responses by increasing the gut-homing α4β7 integrin expression on Tfh cells. This diverted Tfh cells from systemic (non-gut) inflamed sites such as the lung into the gut-associated lymphoid tissues, Peyer’s patches, and thus reduced the systemic autoantibodies. AM80 also inhibited the lung Th17 response. AM80’s effect in the lungs was readily applied to the joints as AM80 also inhibited Tfh and Th17 responses in the spleen, the major autoantibody producing site known to correlate with K/BxN arthritis severity. Finally, we used anti-β7 treatment as an alternative approach, demonstrating that manipulating T cell migration between the gut and systemic sites alters the systemic disease outcome. The β7 blockade prevented both Tfh and Th17 cells from entering the non-immunopathogenic site, the gut, and retained these T effector cells in the systemic sites, leading to augmented arthritis. These data suggest a dual beneficial effect of AM80, targeting both Tfh and Th17 cells, and warrant strict safety monitoring of gut-homing perturbing agents used in treating intestinal inflammation.

The leukocyte integrin cell adhesion molecules alpha4beta7 and alphaEbeta7 mediate the homing and retention of lymphocytes to the gut, and sites of inflammation. Here we have identified heat shock protein 70 (HSP70) as a major protein that associates with the cytoplasmic domain of the integrin beta7 subunit. HSPs are molecular chaperones that protect cells from stress but more recently have been reported to also regulate cell adhesion and invasion via modulation of beta1, beta2, and beta3 integrins and integrin-associated signalling molecules. Several HSP70 isoforms including HSP70-3, HSP70-1L, HSP70-8, and HSP70-9 were specifically precipitated from T cells by a bead-conjugated beta7 subunit cytoplasmic domain peptide and subsequently identified by high-resolution liquid chromatography-tandem mass spectrometry. In confirmation, the beta7 subunit was co-immunoprecipitated from a T cell lysate by an anti-HSP70 antibody. Further, recombinant human HSP70-1a was precipitated by beta7 cytoplasmic domain-coupled beads. The HSP70 inhibitor KNK437 decreased the expression of HSP70 without affecting the expression of the beta7 integrin. It significantly inhibited alpha4beta7-mediated adhesion of T cells to mucosal addressin cell adhesion molecule 1 (MAdCAM-1), suggesting HSP70 is critical for maintaining beta7 integrin signalling function. The functional implications of the association of beta7 integrins with the different isoforms of HSP70 warrants further investigation.

Although CD8 T cells are key players in neuroinflammation, little is known about their trafficking cues into the central nervous system (CNS). We used a murine model of CNS autoimmunity to define the molecules involved in cytotoxic CD8 T-cell migration into the CNS. Using a panel of mAbs, we here show that the alpha4beta1-integrin is essential for CD8 T-cell interaction with CNS endothelium. We also investigated which alpha4beta1-integrin ligands expressed by endothelial cells are implicated. The blockade of VCAM-1 did not protect against autoimmune encephalomyelitis, and only partly decreased the CD8+ T-cell infiltration into the CNS. In addition, inhibition of junctional adhesion molecule-B expressed by CNS endothelial cells also decreases CD8 T-cell infiltration. CD8 T cells may use additional and possibly unidentified adhesion molecules to gain access to the CNS.

Among nonhuman primates, SIV-infected Asian pigtailed macaques (PM) are relatively more susceptible to infection and disease progression than SIV-infected rhesus macaques (RM). In addition, SIV-infected African natural hosts such as the sooty mangabeys (SM) are resistant to disease. The mechanisms associated with such species-related variable clinical outcomes remain ill-defined but hold the potential to provide insights into the underlying mechanisms surrounding HIV pathogenesis. Recent findings indicate that the expression of the heterodimeric gut homing integrin alpha4beta7 can influence both susceptibility and disease progression in RM. It was reasoned that differences in the frequencies/surface densities of alpha4beta7-expressing lymphocytes might contribute to the differences in the clinical outcome of SIV infection among NHPs. In this article, we report that CD4(+) T cells from PM constitutively express significantly higher levels of alpha4beta7 than RM or SM. Retinoic acid, a key regulator of alpha4beta7 expression, was paradoxically found at higher levels in the plasma of SM versus RM or PM. We also observed pairing of beta7 with alphaE (alphaEbeta7) on CD4(+) T cells in the peripheral blood of SM, but not PM or RM. Finally, the differential mean density of expression of alpha4beta7 in RM versus SM versus PM was predominantly dictated by species-specific sequence differences at the level of the beta7 promoters, as determined by in vitro reporter/promoter construct transfection studies. We propose that differences in the regulation and expression of alpha4beta7 may explain, in part, the differences in susceptibility and SIV disease progression in these NHP models.